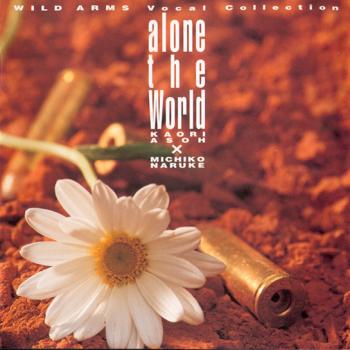 The Wild Arms series has been noted for its emotional vocal themes ever since its debut on the PlayStation. The collaboration between composer / lyricist Michiko Naruke and vocalist Kaori Asou has gained particularly legendary status through setpieces on Wild Arms 2 and Wild Arms 3. In 2002, the pair reunited to offer an entire studio album of Wild Arms themes, most of them brand new recordings. The results will be delightful for fans of the series' vocal themes.

Most additions on the album are vocal arrangements of instrumental themes. The experience opens on an ethereal note with an interpretation of Wild Arms' "lullaby". The majority of this track is treated in a capella, with Kaori Asou's gorgeous voice being accompanied in close harmony with backing singers. "The One I Want to See Most" is closer to what most would expect from a Wild Arms vocal theme, with its reflective yet uplifting vocal performance and orchestral western-spirited instrumentals. It's a fantastic interpretation of the Wild Arms 2 original and it is surprising how natural the vocals sound interpreting the melody.

While the majority of the album has an introspective focus, there are a number of more upbeat numbers. "Zephyrs's" is a lively jazz theme featuring a girly performance from Asou and infectious trumpet interjections throughout. The vocals often take a backseat during this track, but the final result is catchy and refreshing. "Resistance Line" meanwhile is a dark pop anthem reflecting an entirely different style from the vocalist. It contrasts considerably from the rest of the material, but in a way that diversifies the overall experience rather than take away from it. There are also a couple of shorter tracks, "The Night Sky" and "Miracle", that serve as pleasant interludes during the album.

Nevertheless, there are some tracks on the album that are based on existing vocal themes. "You'll Never Be Alone", for instance, is actually based on Wild Arms 2's opening theme but is greatly elaborated upon with extended vocal passages and excellent instrumental interludes. It finally reflects Naruke's giant inspiration for the original theme without any of the premature cuts featured in the game and album. The two main themes from Wild Arms 3, "Advanced 3rd" and "Only the Night Sky Knows", also receive extended renditions. The originals were already quite accomplished, though many fans will be happy that they have been extended into full-length songs.

Though they are in Japanese, a further thing to note about this album is the lyrics. While most RPG composers outsource writing lyrics, these were all written by Michiko Naruke herself, who has a more intimate understanding of the series' scenarios and music than anyone else. The lyrics perfectly fit the shape of the vocal melodies while reflecting the imagery and storylines of the game well. A particularly elegant piece is "Wings", which captures a sense of going forth into a new journey with lines such as "I'll soar once again, with my feathers outspread, to a future woven from shattered wings". They're not Shakespeare, but they're still clearly better written than the typical anime fare out there.

Naruke saves the emotional climax to several ballads at the end of the album. "Continuous 2002 Ver." is actually an arrangement of one of the centrepieces of the series' score. Asou completely makes this song her own with her emotional yet understated performance of the lyrics. The instrumentals remain unobstrusive throughout, though Naruke adds some backing vocals to inspire even more emotions at the end of the track. "alone the world" is deservedly the title track of the album with its giant length and huge dramatic arch. From its sorrowful origins, Kaori Asou gradually offers comfort while interpreting the melody of Wild Arms' "All Alone in the World". Together with the bonus track "distance", this track certainly ends the album on an uplifting note.

After the atrocious treatment of the series' vocal themes in the past, it is wonderful that Sony have finally offered followers the fully-fleshed vocal album they deserved. From its extended theme song renditions, to its inspired arrangements, to its fascinating deviations, the album satisfies all round. Michiko Naruke and Kaori Asou prove an excellently team throughout and they offer one of the most emotional and fitting vocal compilations of any series.