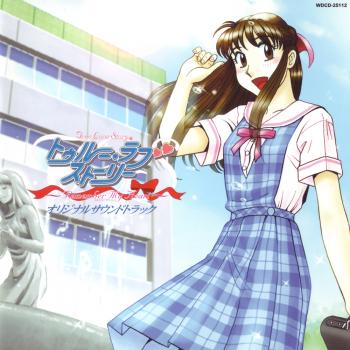 True Love Story is the first in a line of popular male-targeted dating simulators by Enterbrain. Famed RPG composer was given the honours of Noriyuki Iwadare leading the composition for this title, having previously had some involvement in the Doukyuusei, Tanjou, and Sotsugyou series. He was nevertheless assisted by several other employees at Two Five Records, namely Maki Tanimoto, Kenichi Okuma, and Sanae Kasahara, before going solo on subsequent additions to the series. The soundtrack inspires plenty of emotions in the game with a range of sentimental instrumental ballads and light-hearted jazz tunes. However, the album release also features a number of elegant string quartet arrangements and nostalgic character messages. Most of the offerings were also compiled into the first disc of the True Love Story Special Song Box some years later. Let's take a closer look on what is offered...

True Love Story is a relatively strong soundtrack thematically. The "Main Theme" features one of Iwadare's most memorable and elegant melodies, perhaps inspired by one of his jazz improvisations one day. It gets the balance right when reflecting the spirited, relaxed, thoughtful, and naive nature of the main character. The theme receives several arrangements across the soundtrack, most notably in the dance-like piano tune "Confession", the opening string quartet arrangement, and finally the emotional ending theme. Unlike similar soundtracks, the themes to represent Aozora Senior High across the four seasons are not thematically continuous, though are nicely characterised nonetheless. Iwadare particularly shines creating a hopeful synthpop theme for the spring and a reflective improvisation for autumn. Assistant composer Kenichi Okuma appropriately adopts a tropical tone for the summer piece and takes a denser string-based approach for the winter. Though everything is synthesized, the samples are sufficient to bring out the original intentions.

True Love Story's soundtrack disperses a number of character themes across the soundtrack. They mostly feature crisp jazz melodies adapted for a variety of moods. For example, the themes for Midori Amano, Ikumi Goto, and Tomoko Honda are very similar in construction, but the fact they respectively use alto saxophone, electric guitar and flute to present the melody clearly distinguishes their personalities. The saxophone-led approach is most common, though sometimes a problem given the often derivative writing and unconvincing synthesis. Fortunately, the theme for major love interest Ayane Katsuragi succeeds since it features a very smooth and dreamy soprano saxophone line and decent accompaniment. Shuichi Yanagisawa's theme is also pretty enjoyable since the saxophone use is quite raw and driving. Though the character themes are a little similar and underdeveloped, they each have enough melodic charm and girly character for them to suffice as background music in context and on a stand-alone basis.

Aside the aforementioned themes, there are a few short event tracks that aren't worth listening to on their own. Nevertheless, the soundtrack offers some highlights with string quartet arrangements of four themes. Whether the interweaving forces on the main theme arrangement, the Baroque-influenced counterpoint of Ayane Katsuragi's theme, or the elegant blend of arco and pizzicato strings on Yayoi Minami's theme, Shigeto Suzuki demonstrates his prowess over the ensemble and brings out a lot of depth from often sparing original material. Each arrangement develops comprehensively too through sections with contrasting textures and emotions, so prove more than respectable musical achievements. There are also a series of short spoken character messages exclusively across the stand-alone version; it will depend very much on one's affinity for the game and ability with Japanese as to how welcome these drama tracks are. It is finally worth noting that this one does not feature the numerous vocal themes for the game, which are reserved for three vocal collections instead.

The True Love Story ~Remember My Heart~ Original Soundtrack is a modest and likeable accompaniment to the game. Iwadare nicely defined the direction for his future dating simulation soundtracks with his blend of peppy jazz-based character themes and a sentimental main theme. The co-composers bring relatively little innovation or individuality to the table, but at least bulk up the soundtrack and create a few memorable tunes each. The main problem with this soundtrack is that the character themes grow a bit samey, there are relatively few highlights, and the drama tracks can be potentially disruptive. Nonetheless, the main theme and string quartet arrangements provide some defining moments, so what is offered should be enough for fans of this genre. Not Iwadare's best dating simulation soundtrack, but nonetheless a decent purchase.