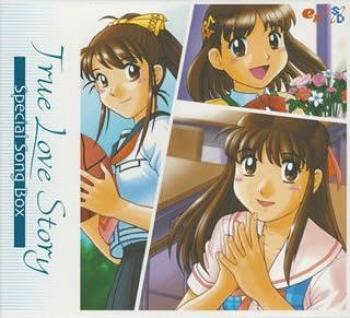 Though the True Love Story series only spans four games, there are quite a few more albums. Each game received a background music soundtrack release, a vocal collection, and, in the case of True Love Story, quite a bit more. The True Love Story Special Sound Box aimed to make things a bit easier for collectors by offering an eight disc box set of pretty much all True Love Story music ever released. The first four discs feature the background music from each game. The last four discs feature all the vocal music for the series united at last. Though it carried an expensive price tag of 13500 yen (140 US dollars), many collectors considered it a worthwhile purchase. After all, it compiled 11 mostly out-of-print albums into one convenient bundle. But is the presentation all that it seems and is the music worthwhile?

The True Love Story ~Remember My Heart~ Original Soundtrack on the first disc reflects the musically pleasant origins of the series. Its mixture of upbeat and sentimental themes, though hardly as elaborate as Iwadare's work on the Grandia and Lunar series, felt pleasant nonetheless. The "Main Theme" is a memorable and elegant composition, likely inspired by one of Iwadare's daily jazz improvisations, that reflects the spirited, relaxed, thoughtful, and naive nature of the game's characters. The Aozora Senior High themes depict the school setting across the four seasons in an endearing way. The character themes themselves mostly feature crisp jazz melodies adapted for a variety of moods. Though each has enough melodic charm and girl characteristics to suffice, they are a little too similar and underdeveloped en masse. A further highlight are four string quartet arrangements that bring out a lot of depth from the original material and serve as respectable musical achievements in their own right.

The True Love Story 2 Original Soundtrack proves to be a more thoughtful and elaborate soundtrack than its predecessor. Material such as the piano and strings main theme, the catchy yet representative main character theme, a balladic 'bad ending' theme, and the rocked-up 'good ending' theme are all very well done. The character themes tend to be a little more diverse this time while keeping with the upbeat jazzy vibe overall. There are also more themes to accompany the gameplay, such as the emotionally contrasting "Episode" tracks, the unobstrusive jazzy "Date" themes, and some bright festival themes. The 48 pieces of background music from the original two disc soundtrack are somewhat squashed into just the second disc on this soundtrack, though fortunately the monologue tracks were omitted and the songs are moved to the vocal section of the box set. This shouldn't be a major purchase limitation overall.

Unfortunately, the True Love Story 3 Original Soundtrack proves the worst in the series, perhaps because Iwadare was too busy focusing on composing the vocal album rather than background music. Instead of going down the sentimental route, the main theme is a light jazzy jam featuring an instantly forgettable melody, poor synthesis, and sterile backing. The character themes seem to have been composed en masse and lack the substance and personality needed to work in context or diversify the soundtrack. Although the scenario themes suffice as transient background music, they lack the melodic potency and harmonic intricacies found in Iwadare's most appealing love themes. The few highlights are a number of short upbeat or sentimental tracks, but even most of these sound like jingles or offer nothing innovative. Once again, the vocal tracks from the soundtrack release are moved to the vocal section of the box set.

The fourth disc features the final soundtrack to the main series, the True Love Story Summer Days, and yet... Original Soundtrack. It is incidentally the strongest of the set, since each piece is much more elaborate in composition and refined in synthesis. For example, the main theme features an intimate piano and violin duet, "Main Menu" features a star accordion performance, and the ending theme is a spectacular exploration of various themes and emotions. Hina Kusunose's theme seems to be a pleasant combination of the styles that made many past True Love Story themes so endearing — featuring sections dedicated to happy-go-lucky jazz melodies and contrasting sections with mild reflective melodies. Iwadare also introduces some novelty to the series with some exotic themes to set the summer setting and a more stylistically varied set of character themes. It is still quite a stereotypical love soundtrack, so won't appeal to everyone, but it is one of the best in its genre nonetheless.

The True Love Story 2 Vocal Collection is directly transferred to the seventh disc of the soundtrack. Many themes adhere to the standard pop formats of the series, such as the upbeat "Shoot from the Heart" and the balladic "Sky", and depend substantially on half-decent melodies or compelling rhythms for their staying power. However, there is quite a bit of variety beyond that, such as the lounge jazz "Endless Rain", acoustic guitar-supported "You & My Friends", or salsa-flavoured "Splash! Splash!". The composers and arrangers ensure that the instrumentation is generally solid, even though it varies from functional to extravagant, regardless of the style. Unfortunately, the vocalists are much more varied in quality with many performances lacking "oomph" and others suffering from intonation and pronunciation problems. As a result, the vocal collection fails to be a consistently enjoyable experience, but has enough high quality tracks and variety to still be worthwhile for its target audience.

Refreshingly, the True Love Story 3 Vocal Collection features Iwadare composing the vocal themes for the first time in the series. Arguably his focus on these songs made the game's background music suffer, but at least some good music came from the third game. Highlights range from "Red Hot Song" and "My Festival" with their Caribbean influences to buoyant rock-infused themes like "Best Regards, Future" and "If There Was an Angel Here" to a selection of ballads like "Start Line" and "Wish". Iwadare was able to meet the quota for satisfying blend of upbeat, reflective, and downright quirky pieces while injecting his unique musicality to the franchise. As a result, the collection feels more like an expression of emotions and inspirations deep within Iwadare rather than a pile of dated and derivative themes lacking an individual identity. There are also four well done opening and ending themes from the official soundtrack featured in the song selection.

The True Love Story Summer Days, and yet... Vocal Collection featured at the end of the eighth disc reaffirms the inverse correlation between the quality of the original score and vocal collection for a particular game. Externally composed once more, the team emulate Iwadare while offering upbeat rock tracks like "A Moment of Freedom" and "Love Advice" as well as soft ballads like "Now Until Forever..." and "Nameless Flower". However, these songs don't tend to have quite as much charm or emotion as Iwadare's works and seem to be somewhat derivative and thoughtless in construction. There are also a few songs featuring novel instrumentation, such as "Now Until Forever..." with its panpipe infusions or "Perfect World" with its strange mix of upbeat vocals, bagpipe solos, and vocorder parts, though the success of these themes varies. The short versions of the OAV themes don't make it from the vocal collection in favour of the excellent box set exclusive "Beyond This Path".

The True Love Story Special Song Box is definitely a respectable production. The first four discs efficiently compile the background music for the series and, aside a few track times being slightly shaved, everything is well-presented. The subsequent four discs remarkably feature vocal tracks exclusively, demonstrating just how much music has been created for the series. Although there is some overlap between which games and albums are represented on each disc, essentially everything is there in its full form. As for the series' music as a whole, it is probably effective and enjoyable in context, but is certainly a select taste as a stand-alone listening experience. Some will find the music for the series endearing, emotional, and catchy whereas others will find it irritating, tacky, and bland. Noriyuki Iwadare and co. did an impressive job for a dating simulator, but the simple nature of the genre still limits things considerably. On the conditions that a) you like light-hearted and superficial music, b) can imagine yourself within the context of a dating simulator or true love story, c) have a completist tendency, and d) have lots of money to spare, then it is worthwhile considering tracking a copy of this box set down.