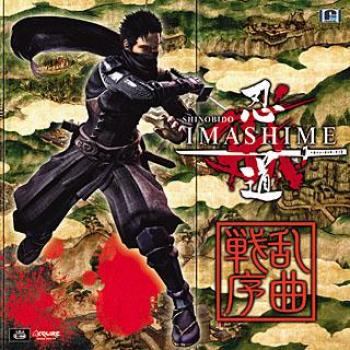 Shinibido Imashime War Overture, released in late 2005, is an Asian-styled soundtrack composed by Hideki Sakamoto and Keisuke Itoh. With rare exceptions, the album never strays far from its roots and retains traditional instrumentation throughout. Can the duo successfully fashion a soundtrack with a single mindset that maintains ingenuity and originality for its entire length?

The erhu, performed by WeiWei Wuu, is utilized to great extent on this album, evident from the very first track, a brief opener entitled "Moondog." The somewhat modern percussion works quite well with the aforementioned instrument to give off a nice flavor to introduce the rest of the soundtrack. The following track, "Moondog -Immortal Flower-" is introduced by a brief movement on the piano which soon gives its priority to the erhu while playing its backup. The latter sound particularly haunting here. It's a nice, albeit short, track. "Moondog -To Purification-," the last of the Moondog tracks, is a brief, ephemeral erhu solo. It's a somewhat uninspiring way to round off the use of a recurring melody.

A large portion of the tracks are atmospheric to set the mood, and while they all do this quite nicely, they tend to drag on after a bit, both themselves and in conjunction with the others. One early example of this is "Numerous Worries." The instrumentation is light though nicely complementary, featuring a shakuhachi and flute, with a soft wind blowing in the background, but no appreciable development occurs regardless. "Lingering Scent" retains this use of wind nicely, and sets it up as a backdrop against some rather featureless tones on a mallet. "Remains of Cold Ashes" is nearly entirely composed of that same lightly blowing cavernous wind, with a few tense chords on strings and movements on the mallet sprinkled throughout. "Secluded Alleyway" starts as a rather interesting percussion based piece, but becomes somewhat tedious as it becomes apparent that very little noticeable variation occurs. Indeed, the rhythm does become slightly more complex, but it happens so gradually that it is hard to notice.

There are some more melodic and interesting tracks nevertheless. "Days of Loss" starts somewhat slow, but builds quite nicely, as the percussion speeds up. By the end it doesn't reach a fervor, but it does get the heart pumping to a degree. "Ephemeral Breeze" is a nice flute based piece with a curious 'boing' in the constant percussion. It's gentle and calming. "In the Midst of Blame" is rather chromatic, though it portrays some effective chords through its development. The piano is used quite effectively to set the mood here. "Former Fragment" starts off with a nice movement on the shakuhachi which then complements a haunting melody complements of the erhu quite nicely. The track can give off chills, especially when the key changes. "Gradually" sets off a more cinematic, dramatic mood, especially with its chordal use of strings in the latter half. The drops in "Drops of Devotion" are quite audible initially as brief punctuated bell sounds. The track develops somewhat with the addition of the erhu temporarily, but soon becomes a series of tense chords on the strings and piano. The erhu soon makes a welcome reappearance, helping to close the track with a nice piano accompaniment.

The more fast-paced tracks are quite effective too. "Crowds of Life" never lets up for a moment, featuring pounding, complex percussion and some thrilling guitar work provided by Shunji Takenaka. Although the track is low on pure melodic content, it holds one's attention quite satisfactorily. "Howling One" features some nice, addictive percussion underlying some tense chords on the trumpets and tense notes on the bass strings. The track feels oppressive, and rather ingeniously so, thanks to its intelligent instrumentation. "Time Shivers" shares this addictive percussive beat, but feels somewhat more subdued, though no less tense thanks to the somewhat atonal melodic snippets accomplished by the strings. A note high in the piano's register seems to greet the dusk in "If Twilight Draws Near," as the fast percussion and haunting, repeated adjacent chords on the piano help move the track forward.

"Unacceptable Time" is more stable melodically. The erhu takes the reins and helps deliver a pounding, driving track signaling the beginning of the game's end. The whistle makes its presence known from time to time, as more dramatic chords are played on the strings. "Revolving Pair" continues the trend established by the preceding, a pounding, driven track helped by the erhu's presence, this time featuring descending staccato notes in the strings that help portray an even tenser, dramatic mood. "Destiny Attained" is quite a fantastic work. The most dramatic piece on the album, helped in its portrayal by the rolling scales on the piano, and the heavy, melodic themes played by the erhu and whistle, with the brass providing an excellent backup. The track excellently portrays an epic, final battle with gusto. Tracks such as these really reflect the high production values in composition and performance alike on the score.

"Sundog," the antithesis to the opening track in title, is a gentle, beautiful piece. It is initially mainly a duet featuring the guitar and erhu. Soon the strings create more dramatic chords as the piano enters, creating a most entertaining trio of instruments, closing the track. The closing track, "Master," is a pleasant jazzy piece. The guitar provides a nice beat over the percussion, which temporarily takes over the track, soon giving the spotlight back to the guitar playing a jazzy melody. The piece is a little dark — somewhat odd given it upbeat nature — but it works, suitably, if not somewhat curiously, to end the album.

There are some quite accomplished tracks on this album, but there are also many tedious, drawn out atmospheric tracks. I can see these working in the context of the game quite nicely. However on the soundtrack, especially weighted toward the beginning, these pieces tend to bore the listener before they might get to some of the truly enjoyable works, of which they aren't large enough in number to truly warrant a suggestion for this album's purchase. If the reader is rather partial to laid back, atmospheric Asian-inspired collections this might very well be a good purchase, but to those who are looking for a more driven soundtrack, this one may be safely overlooked.