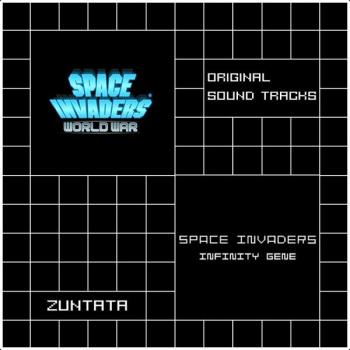 In recent years, the Space Invaders series has enjoyed a resurgence of popularity with new instalments for the DS, PSP, WiiWare, Flash, Mobile Phone, and iPhone. The flash game Space Invaders: World War and mobile phone game Space Invaders: Infinity Gene are two such titles. Zuntata's Hirokazu Koshio created short electronic scores for each game, which were bundled together in a digital release. Is it worth purchasing?

The album opens with an 'emergency warning' voice-over and it seems fitting to also begin this review with a warning. This soundtrack is mostly comprised of relatively brief electronic tracks, all of which border on sounding aseptic. Listeners shouldn't expect any of the quirky sound effects or catchy melodies that characterised previous Space Invaders scores. Nevertheless, Koshio's approach is effective for providing a futuristic backdrop to the games and is potentially enjoyable on a stand-alone basis.

Five electronic tracks provide the accompaniment to Space Invaders: World War. Probably their biggest draw is their great rhythmical impetus. "React", "Syndrome", and "Addiction" in particular get listeners straight to the action with their heavy beats and uplifting nature, whereas "Devolution" and "Mirage" are a little more atmospheric and surreal. The tracks feature state-of-the-art sampling and mixing, giving a very modern feel to the game. However, each is less than 90 seconds long and somewhat repetitive, meaning the soundtrack is quite unfulfilling overall.

The soundtrack for Space Invaders: Infinity Gene resolves one problem and replaces it with another. The majority of the tracks this time are better developed and, though still based on incessant loops, at least extend beyond the two minute mark. Unfortunately, the mobile phone sound chip used has a very choppy quality to it, allowing less rich and futuristic soundscaping. Nevertheless, Koshio sometimes uses this to his advantage to provide a more industrial sound in tracks such as "Mutation" and "Manipulate". "Program" and "Strategy" are also abstract experiments that are a little more fascinating than the rest of the material on the album.

The soundtracks for Space Invaders: World War and Space Invaders: Infinity Gene work quite well in the game and each have their moments. However, they suffer somewhat out of context for their aseptic electronic approach and don't offer enough length or variety to be fulfilling. As a result, it is very difficult to recommend purchasing these soundtracks for stand-alone listening, even when bundled together.

Album was composed by Хирокадзу Косио and was released on May 06, 2009. Soundtrack consists of 14 tracks tracks with duration over about 30 minutes. Album was released by Zuntata Records.