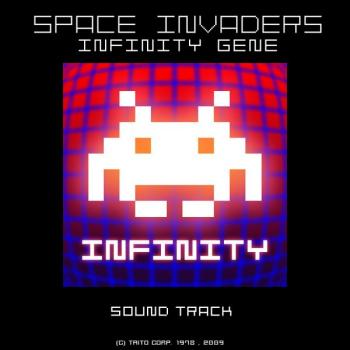 In recent years, the Space Invaders series has enjoyed a resurgence of popularity with new instalments for the DS, PSP, WiiWare, Flash, Mobile Phone, and iPhone. Space Invaders: Infinity Gene was originally a mobile phone game that was completely remade for the iPhone. Zuntata's Hirokazu Koshio, with a little help from Soundwave, revamped his original score for the game and released the results through iTunes. Is it a significant improvement?

Almost all the compositions on the iPhone soundtrack are based on those previously used in the mobile phone soundtrack. However, they have been completely resampled and remixed to accommodate the streaming capacity of the iPhone, making for a much more enjoyable listen. The majority fit the futuristic image of the game well with their electronic focus and rhythmical impetus, though tend to be quite repetitive and aseptic. They range from compelling techno mixes such as "Survival" and "LifeGame", to industrial sounding tracks such as "Mutation" and "Manipulate", to abstract experiments such as "Program" and "Strategy".

In this album, each track is arranged in three different versions — Genetic, Adaptive, and Evolution. As the gameplay intensifies, there are transitions between these tracks to represent a great pace and density. In context, it is excellent how the soundtrack is able to bring this interactivity and it is certainly a step up from the more stale mobile phone addition. Through a combination of expert arrangements and programming, the ideas are wonderfully implemented too.

For the most part, the different variations aren't as interesting to listen to in soundtrack form. Though a simplification, the 'Genetic' tracks tend to be mostly based on minimalistic industrial loops, the 'Adaptive' tracks are more fleshed out techno compositions, and the 'Evolution' tracks tend to be intense hardcore mixes. Unfortunately, the core ideas tend to be too barren for the arrangements to be that interesting and, within each of the three sections of the album, most tracks tend to sound very similar.

The soundtracks for Space Invaders: Infinity Gene is respectable, but not likeable. It is impressive how Koshio managed to use the soundtrack to both enhance the futuristic feel of the game and bring interactivity to the gameplay. However, the compositions themselves tend to be uninteresting and repetitive, especially when present in multiple variations. As a result, it is best not to download the album release.

All music composed by Hirokazu Koshio, except tracks 9, 18, and 24 by Soundwave.
Album was composed by Хирокадзу Косио / Soundwave and was released on August 12, 2009. Soundtrack consists of 27 tracks tracks with duration over about 55 minutes. Album was released by Zuntata Records.