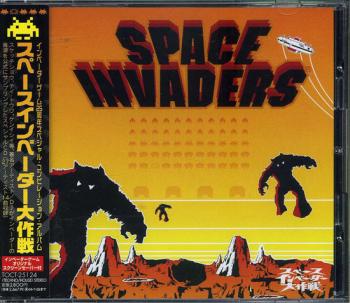 In 2003, a team of Japanese DJs commemorated the 25th anniversary of the Arcade classic Space Invaders with a rather interesting album. On Space Invaders Daisakusen, DJs such as Mijk van Dijk, Chester Beatty, and Towa Tei collaborate to blend electronic beats with the sound effects and simple motifs from the original game. The final results are not always as interesting as the concept, however.

After opening with a chaotic array of sound effects, the album gets straight to the action with "Space Invaders 2003". This track uses the descending four notes from the original Space Invaders as the basis for a five minute remix. Ken Ishii and FLR add a range of electronic beats, ethereal synthpads, and, of course, UFO sound effects atop. The resultant arrangements is sometimes quite enjoyable, but verges on being annoying and repetitive in places. That's largely because the focal material is so minimal and not really developed upon.

Most of the tracks elsewhere on the album are dominated by the sound effects from the original game. This certainly gives an authentic and retro tone to the album, while emphasising the spacey sound. However, the resultant tracks are only enjoyable if there are other features to enjoy and generally the vanilla techno mixes like the opener don't really suffice. Trippy-Trapper-Music's "The Invader Who Loved Me Mix" and Malawi Rocks' "Theme from Space Invaders" tend to be novel and quirky enough to sustain interest. However, other more unusual ones such as "I.N.V." end up being little more than a pile of sound effects and jarring industrial noise.

If there is one track that stands out on the whole album, it is "Game Over" by Die Rakaten and Kagami. This track integrates the sound effects from the game into a pop track featuring male vocals, bouncy beats, and thrashing guitars. The resultant blend is actually very well done and fairly catchy. However, the vocals themselves leave a little to be desired, especially when interpreting lyrics such as "You must believe us... it's hard to be a Space Invader in this galaxy". Still, a very cute addition to an otherwise somewhat bland and repetitive album.

The Space Invaders Daisakusen album features an interesting concept. However, it is implemented quite inconsistently and many of the tracks end up being repetitive and unfulfilling in some way. It is worth a few spins around the CD player given there is plenty of novelty value here. However, the album certainly isn't a timeless classic like the game was.

Arrangement:
01. Sketch Show
02. Ken Ishii vs FLR
03. Die Raketen vs Kagami
04. Towa Tei vs Sweet Robots Against the Machine
05. Mijk Van Dijk vs Toby
06. EL-KT vs The Perfect Futurist
07. Trippy-Trapper-Music vs ELEKTEL
08. Malawi Rocks vs K-Sobajima
09. Ko Kimura vs E-Male
10. DJ Shinkawa vs DJ Mase
11. Chester Beatty vs DJ Shufflemaster
12. Shin Nishimura vs Dr Shingo
13. O'Hey vs Marco Bailey
14. Co-Fusion vs Rebus Tape
Album was composed by and was released on July 30, 2003. Soundtrack consists of 14 tracks tracks with duration over more than hour. Album was released by Toshiba EMI.