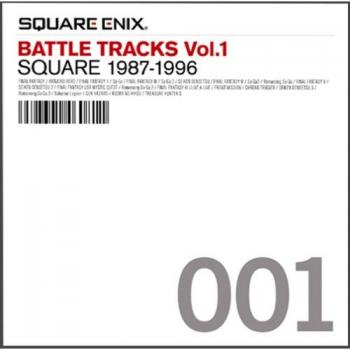 Of all the music in Square Enix's games, it is the battle themes that have generated the greatest fanbase. To celebrate this, Square Enix's record label have released a series of compilations featuring battle themes from different eras. The first volume celebrates original battle themes from Square's RPGs for the NES, SNES, and Game Boy. It features one track from every major Square game from that era and also includes a surprising bonus arrangement. Were the right tracks selected and are they still enjoyable to revisit?

This album reflects the origins of the appeal of Square's battle themes. Despite being composed with humble chiptunes, Final Fantasy's "Battle Scene" still reflects the defining features of the series' battle themes: adventurous melodies, compelling rhythms, dangerous interludes, and, of course, a rocking spirit. Uematsu went on to develop these foundations with more ambitious efforts featured here, such as "Battle Scene II" and "This is the Final Battle" from the subsequent two Final Fantasy games. What's more, his battle themes influenced those of the SaGa and Mana series too, both of which were branded as Final Fantasy games in their localised releases. SaGa 2's "Lethal Strike" and Seiken Densetsu's "Battle 1" are highly reminiscent of Final Fantasy's normal battle themes, but feature a different kind of lyricism — that of Kenji Ito's.

During the Super Nintendo era, many agree that Square's battle themes underwent something of a renaissance. Final Fantasy V's "Clash on the Big Bridge" had a more complex structure and richer melody than its predecessors, reflecting Uematsu at his most playful and experimental. Hiroki Kikuta took an altogether more wacky approach with Secret of Mana's "Danger" and Seiken Densetsu 3's "Nuclear Fusion", but created some fascinating imagery in the process. Final Fantasy: Mystic Quest's "Battle 1" meanwhile had a more mainstream rock flavour than its main series counterpart, owing to Ryuji Sasai's rock-oriented background and the splendid electric guitar synthesis. While not as well-known as their cousins, Kenji Ito's battle themes also hit a peak on the Romancing SaGa trilogy and the three selections featured here are excellent.

While this selection largely reflects the character and quality of Square's battle themes, there is the occasional stinker here. For example, Hanjuku Hero's circus-style battle theme is brief and annoying, while Chrono Trigger's normal battle theme is surprisingly annoying. In terms of selections, perhaps the most controversial item on the album is Final Fantasy VI's "Dancing Mad". This 20 minute pipe organ solo, used to represent the multi-tiered final battle with Kefka, is certainly one of Nobuo Uematsu's most ambitious achievements. Yet it is not as satisfying slumped in the middle of this album as it was at the climax of a three disc soundtrack and feels somewhat out-of-place amongst the shorter battle tracks. Some will be delighted by its appearance, whereas others would have preferred a greater number of selections per game instead.

The end of the album features a number of compositions from lesser-known games. For example, Nobuo Uematsu shows his serious side on Gun Hazard, Masaharu Iwata brings some colourful orchestrations to the mix with Treasure Hunter G, and Ryuji Sasai makes a welcome return with the spirited melodies of Rudra no Hihou. Mitsuto Suzuki also offers a bonus arrangement of Ito's "Last Battle" from Romancing SaGa 2 at the end of the soundtrack. It is a beautiful display of Suzuki's minimalistic electronic styles that he also built on In My Own Backyard and Neurovision, and uses the original's source material in an abstract yet ingenious manner. Its inclusion here is somewhat unexpected and those expecting a rip-roaring rock experience are likely to be disappointed. Instead it provides a completely calming and ethereal end to an otherwise action-packed album.

The concept of a battle theme compilation album is a promising one, but it poses so many dilemmas for producers and yields so many expectations for fans that it is difficult to produce an entirely satisfying album. The producers decided to offer just one battle theme per game here, but select them from no less than 24 games. In doing so, they offered a very broad semi-historical perspective on the series' battle themes and provided some opportunities to introduce new music to fans. However, they also omitted many fan favourites from the Final Fantasy series and beyond, while potentially alienating people further with some questionable additions. In general, it is more satisfying to listen to the battle themes in the contexts of the game and their full soundtrack releases, rather than in this somewhat randomly conceived compilation. This album is nevertheless quite nostalgic and will be potentially helpful for new soundtrack listeners.