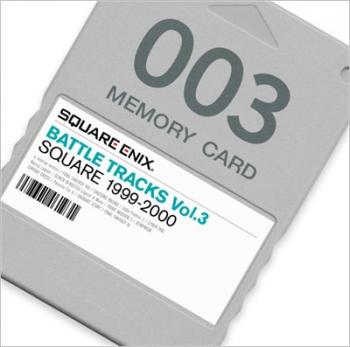 Following the lukewarm reception and sales of Square Enix Battle Tracks Vol. 1, many wondered whether a second compilation of battle themes would happen. After more than a three year wait, Square Enix finally revived the album series in 2010, in preparation for the Tokyo Game Show. They produced two new volumes of battle tracks, one for 1996-1997 and one for 1998-1999, that were entirely dedicated to Square's PlayStation era. Was the wait worth it?

The selections on the Square Enix Battle Tracks Vol. 3 aren't quite as diverse and abstract as those on its predecessor, but they still don't really adhere to what was expected. Once again, the album features source material from games that don't feature conventional battle themes at all, for instance the shooter Internal Section or the action game Cyber Org. The development for these games was outsourced, the musicians featured were freelancers, and the soundtracks themselves have been practically officially ignored till now. It is therefore difficult to understand why selections from these titles are featured alongside staples such as the Final Fantasy, Mana, or SaGa series. They certainly don't integrate well with the rest of the album and perhaps should have remained outsiders in Square's discography.

Square's weird and wacky experiments during the PlayStation era nevertheless yield some quite interesting music here. Cyber Org featured a hard rock soundtrack by Yoshihiro Sato, exemplified by "Survive or Die" here, while Internal Section featured a well-produced futuristic techno soundtrack from Shinji Hosoe as demonstrated by the boss theme. The battle themes from Racing Lagoon — a unique game hybridising RPG and racing elements — featured some satisfying hard jazz stylings from Takahito Eguchi (miscredited in the booklet). In the case of "Zako Battle 2", the producers at Square Enix Music finally seem to succeed in selecting one of the most satisfying tracks on the soundtrack. Further diversity is provided by the horrifying Parasite Eve II selection and rock-influenced Front Mission 3 stylings. It's just a pity that none of these tracks seem together to form a cohesive or satisfying whole.

Of course, there are still some more conventional battle themes here. SaGa Frontier II's "Feldschlacht I" is slightly lighter and classically-tinged than most battle themes, but it still has the same rhythmical impetus and melodic focus that Nobuo Uematsu introduced way back in Final Fantasy's "Battle Scene". Of all the selections, it is one of the most suitable and provides a particularly early enjoyable rendition of the game's main theme. "Pain the Universe" also probably deserved a place here. Like Cyber Org and Front Mission 3 before it, the track does have a clear rock emphasis, but it has the heroic spirit and aforementioned features that make it ideal for an RPG. Vagrant Story's "Minotaur" is also a solid selection that captures some of the mood and drama of Hitoshi Sakimoto's ground-breaking score.

However, most of the other choices leave listeners feeling more cheated than satisfied. Final Fantasy VIII's "Don't Be Afraid" and Final Fantasy IX's "Battle 1" are both decent normal battle themes that greatly contrast in their approach. However, it is a travesty that just these tracks were selected from these games, when the more remarkable boss themes were completely omitted. These inclusions feel more like obligatory nods to the game rather than definitive tributes. What's more, the choice of Chrono Cross's "Gale" is sure to upset a lot of listeners, given the relative unpopularity of the track compared with the rest of the soundtrack. Again, it seems like this compilation wasn't put together by passionate experts, just those looking to make a few quick bucks.

Like its predecessor, the Square Enix Battle Tracks Vol. 3 doesn't offer enough to be satisfying. This album is essentially a random sampling of action tracks from mostly unrelated games, not a selection of fan favourites, and there are no exclusive arrangements here. No doubt this album will tempt people at the impending Tokyo Game Show 2010 given its obvious potential. Some might ask, "How could this album possibly be bad? It features Square Enix's battle themes after all". But even with the best source material, compilation albums can always be dodgy if the selection and presentation is not up to scratch.


*Note: Although the booklet only credits Noriko Matsueda as the composer of "Zako Battle 2", the original soundtrack had more detailed credits.