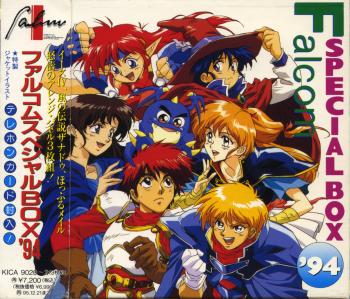 I remember browsing through the English Falcom website, when I saw this three disc set. Super Arranged Versions of Ys IV, The Legend of Xanadu, AND Popful Mail music??!! Based on various samples from these games, I couldn't wait to get my hands on this set. Ys IV speaks for itself, The Legend of Xanadu is one of the games in Falcom's Dragon Slayer lines, and Popful Mail... well, let's just say I was curious how Falcom would deal with the music from this cute, anime-styled game. The anime-styled collage of chracters on the front and the fact that the words, "Ryo Yonemitsu", "J.D.K. Electric Orchestra" and "J.D.K. Band" were there on the back didn't hurt at all, either! Overall, this was looking to be a slice of heaven, spread across three CDs.

Instead, it seems as if the tracks that were considered filler even on the Perfect Collections are here. Sadly, these are also the longest ones. "An Ancient Legend" and "Family of Darkness" are prime examples; both can best be summed up as ambient and they both run about five minutes long. "The Syobanin" and "Sacred District" are both poor representatives for the otherwise excellent Ys IV Perfect Collections, as they specialize in poor composition and overall boredom. Really, all of the noteworthy tracks come from the first Perfect Collection. "The Dawn of Ys", "Promarock," and "The Romun Empire" are all lively and well-composed. "Tower of the Shadow of Death," while repeated, is arguably the best version of the song and the two pieces from the third Perfect Collection are very neat (although again, they're not among the best the album has to offer — I'd swap them for "Bronze District" and "Sanctuary of the Sun" in a heartbeat). Finally, my all-time favorite piece of music from Falcom, "Battle #58," brings the house down, with a wicked techno-style power rock! This track single-handed saved this disc from total mediocrity.

Disc Two, from The Legend of Xanadu, was a huge pick-me-up. Just by looking at the credits (Michio Fujisawa and the Electric Orchestra) I knew to expect good, clean relaxation music. I wasn't expecting such a masterpiece. Fujisawa's slow new age style music is actually a little more upbeat than usual and it really is an absolute joy to listen to. Everything about them, from the compositions to the instruments to the waves in "Desert Wind", are magnificent. This was actually one of Fujisawa's last Falcom arrangements and he goes out with a bang. The Electric Orchestra sparkles, as well (and as usual). Personally, I prefer their style of music to most orchestral arrangements. It's almost as if they're saying, "We're not a real orchestra, but our fake instruments sound better, so we're sticking with them." Highlights include a beautiful harp in "The Successor" and the organ at the start of "The Silent Tower". And... for the first time ever, I can say that the J.D.K. Band tracks sound completely out of place. The problem is that they're scattered inbetween the Electric Orchestra and the New Age tracks, so they really have a tendancy to pull me out of the listening journey the other tracks create. Of course, they're also some of the best tracks the J.D.K Band has pulled off (especially "Wings of Darkness"... WOW!) so this isn't a problem if you're just flipping around. Overall, I am thoroughly impressed and this turns out to be the best disc in the set.

Finally, we have Popful Mail Super Arrange Version on disc 3. This one is what we refer to as an old-fashioned "Falcom Rock-Fest." The disc opens with "Distant Valhalla" by the Electric Orchestra, then the J.D.K. Band takes over. Everything you've come to expect from them — guitar solos, drums, melody, crisp sound, style — are present in every single one of these tracks. The compositions themselves are fairly weak — not bad, but nowhere near as strong as any Ys game or Sorcerian — so it takes some time for these arrangements to really sink in. Track 4, a medley of five themes, transitions very smoothly from a variety of different-sounding pieces. This is my favorite on this disc. "Ice Berg", a fairly slow techno piece, makes a seamless transition via a drum solo into the battle theme "Castle", which is pure Falcom rock. The disc ends with the playful "Menu" arrangement, followed by the ending, "Somebody Loves You," done by the Electric Orchestra. And unlike last disc, the orchestra blends in seamlessly here. Very solid, overall.

Don't let my objections to the Ys IV disc scare you away. The Legend of Xanadu Super Arrange Version is good enough to justify the purchase by itself and the Popful Mail arrangements on the third disc are fantastic when they sink in. Plus you do get a small taste of the brilliance of the Ys IV Perfect Collections... "Battle #58" is good enough to have its' own CD! As far as The Legend of Xanadu and Popful Mail go, you won't find arrangements better than the ones in this set. The fact that the individual soundtracks to these games are extremely hard to come by make this an even greater overall buy. Also as a side note, there is a separately released The Legend of Xanadu Super Arrange Version; the box set version is different from that one and much better, I think. Now comes the fun part — this box set is very rare. I've seen it on eBay a total of one time, so you're probably going to have to go through Yahoo! Japan Auctions to find it. They're actually pretty frequent over there, but not cheap — expect it go in the $50-$60 range. My overall recommendation: Expend the money and effort it takes to find this set, because it is well worth it.