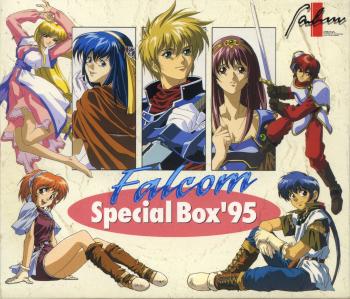 Falcom Special Box '95 is one of the most dubious releases in the annual series. While its individual components will attract certain consumers, I'm not convinced that the box works well as a whole. It features three discs: CD Drama The Legend of Xanadu II featuring drama performances and a few arrangements; The Legend of Heroes III Electric Orchestra featuring some high quality synth orchestrations; and Ys IV J.D.K. Special Vol. 2 featuring the remaining and unused tracks from the individually released Ys IV J.D.K. Special Vol. 1. While there is little bad music in this collection, only the second disc serves as a must-have in my opinion and it's already been released separately...

The first disc of the album features the CD Drama The Legend of Xanadu II. For most non-Japanese listeners, this release won't be a particularly worthwhile one, since it's dominated by long dialogue and dramatic performances. While the drama seems very well done, you have to understand Japanese and be a hardcore fan of the game to enjoy this in the least. That said, there is so redemption for Western listeners as there are four arranged tracks dispersed through the disc. "Ordeal" is Tomohiko Kishimoto's rock at its finest, complete with nostalgic melodies and ecstatic rhythms. Surprisingly, "Island" and "Village" take a more atmospheric focus, complete with exotic instruments and soft melodies, but they're very well done and serve as effective interludes to the drama. Finally, "Legend of the Wind" ends the album on an elating note with one of Falcom's female rock anthems. A select taste, but potentially a goodie.

The highlight of the album is definitely The Legend of Heroes III Electric Orchestra featured on the second disc. Though written for a synth orchestra, this format works surprisingly well due to the unusual colours it creates. The opening rendition of "The White Witch Gerud" is a perfect example, featuring everything from conventional strings to ethnic woodwinds to spiritual vocals. Tamiya Terashima continues the dramatic focus with the action-packed "The Great Battle of Bolt" and the more personal "Demise". Nevertheless, there is a shocking diversity also present on the album with everything from jazz (e.g. "Afternoon at the Beach", "Spirit Days") to gothic chorales (e.g. "Sorrowful Melody", "Ordol Cathedral") to complete anomalies (e.g. "Queen Isabelle", "Spirit in Our Days"). It's a very different arranged album, but still a beautiful listen that does justice to the original score. Note that this disc was separately released in 2001, so it's no longer necessary to purchase the box set to get it.

Finally, we come to the Ys IV J.D.K. Special Vol. 2. In my opinion, it was a cheap trick to put this disc within a box set, considering the first volume was released separately. For some, the two volumes of the J.D.K. Special be a welcome listen, since they are the closest thing available to a soundtrack release for Ys IV: The Dawn of Ys. However, they are actually resynthed versions of the music using FM sound chips, so do not represent the authentic game experience. While many of the important tracks from Ys IV are featured on the first volume, there are still a number of highlights on the second volume, including the bubbly pop theme "Fountain of Love '93", the haunting ambient gem "Quickening of the Ancient City", and the rocking action track "The Final Decisive Battle". There are also several unused tracks, such as "Crater", "Temple", "Tower", and "Prison Tower", that prove better than expected. However, I'm not convinced this disc is a must-have and it's probably better to stick to the three Perfect Collection albums instead.

For the consumer, the presentation of this box set raises many dilemmas. Is it worth listening to a CD just to hear four high quality arrangements dispersed among 40 minutes of drama? Is it worth buying a whole box set just to hear the rest of the Ys IV J.D.K. Special? Is it better to buy The Legend of Heroes III Electric Orchestra separately or within the box set? While answers to these questions will differ from person-to-person, it's my personal view that the Falcom Special Box '95 is more of a random collection of discs than a cohesive overall package. The orchestral version is worthwhile, but it is probably best to purchase it separately, while the other two discs contain sparing highlights and should only be sought by hardcore collectors.