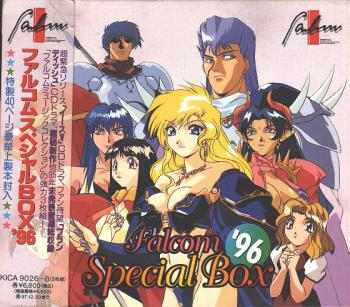 Falcom Special Box '96 is probably the least accessible of the series' box sets for Western consumers. That's since the majority of the album is dedicated to Japanese drama, not actual music. However, there are some interesting highlights on the soundtrack nevertheless, such as some jazz piano and rock band arrangements, unreleased and bonus tracks from The Legend of Heroes III, and a whole soundtrack for a Xanadu remake. Could there still be enough in this album for a hardcore collector?

The first two discs of the album are drama collections. Listeners should expect to hear about 45 minutes of Japanese dialogue and drama in each collection, set again some faint music samples from the original score. This is ideal for those Japanese speakers wishing to visit the stories of both Ys V and Brandish Gaiden, but I imagine these are certainly a marginal audience in the West. They are well-produced, but certainly pointless for most out there.

Each of the drama discs fortunately features a couple of actual arrangements to break up the drama. There are two piano versions, specifically of Ys V's "Lilia" and Brandish Gaiden's "A Journey Without Rest". Both are beautifully arranged jazz ballads, the former cold and scenic, the latter warm and relaxing. There are also two vocal tracks by the J.D.K. Band, specifically an extended ethereal version of "Departure of Sunrise" and a more hard-edged rock ballad based on "Legend of the Lone Wolves". These are bound to be select tastes and, in my opinion at least, Tomohiko Kishimoto's vocals just don't cut it and the arrangements also sound quite dated. While I highly recommend the piano tracks, I don't think the drama discs are worth your time otherwise.

Fortunately, the third disc is a Falcom Music Collection jam-packed with exclusive original music from Falcom titles. The biggest highlight is probably the Revival Xanadu Game Soundtrack, dedicated to the PC-9801 remakes of the original Xanadu. Though the score still features old-school synth, it is considerably more elaborate and more classically-oriented. Perhaps the defining feature of the album are diverse arrangements of the haunting French dance "La Valse Pour Xanadu" introduced in the original game. Other additions range from Baroque dances like "Repos" and "Finir" to soothing synthy tracks like "Loin" and "Vrai" to more modern rock tracks like "Gros Monstre" and "King Dragon". My major criticism is that the soundtrack would have benefited from a disc all to itself, since many themes are crammed together. It's still solid and an enjoyable listen.

There are also 11 unused tracks from The Legend of Heroes III, as previously featured on a bonus album enclosed with the Renewal version of these games. These are unused tracks from the PC-8801 version of the game and therefore feature quite a choppy sound source. The compositional quality is also mixed. "Sunset" and "Ship", for instance, are reminiscent of the annoying bubbly themes featured all over the first disc of the full soundtrack release and others such as "Anger! Shorts" and "A Visit! Otasuke Group" are little more than jingles. Still, there are highlights such a the ridiculously upbeat and rocking "Tower", Demon Castle", and "Boss Battle". Were it included in the full release, I imagine "The Legend of Heroes III" could have been quite iconic too. It nicely blends together the rocking and poppy aspects of the game together into a standard upbeat theme that might fit a staff roll.

There is a whole load of other obscure material on the third disc. Those wanting more from the J.D.K. Band can enjoy the gritty instrumental rock anthem "The Tower Between Heaven and Earth" written for Brandish VT and an absolutely awesome take on "Xanadu" featuring low-key vocals and extravagant instrumentals. There is also a preview of The Legend of Heroes IV's music with the humble prototype versions of "The Mountain Road" and "Plateau". Finally, listeners can enjoy more exclusives with the cinematic "Prologue" from Brandish Renewal and the more anthemic "The Little Heroes" from The Legend of Heroes III Renewal.

It's difficult to sum up the Falcom Special Box '96. On the one hand, it features two discs of almost completely pointless tracks for Western consumers. On the other hand, it features a third disc jam-packed with exclusive highlights. Material such as the Revival Xanadu Game Soundtrack, two piano arrangements, and some of the J.D.K. Band performances are especially enjoyable. However, I'm still not convinced there's enough to justify purchasing a whole box set for and I think the release is still best reserved for Japanese customers only.