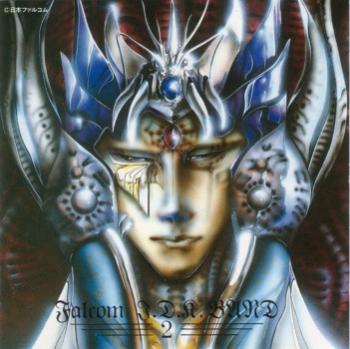 J.D.K. Band 1: One of the best arranged albums you can possibly find. Excellent combination of variety in styles and memorable songs. Highly recommended.

J.D.K. Band 3: One of the best game music vocal albums released, second only to the Sakura Wars 2 Vocal Collection. Hated by some for the departure in style from J.D.K. Band 1 and 2, but still excellent nonetheless.

J.D.K. Band 4: Decent, but considered the black sheep of the series. The combination of being TOO synthy and limited source material really drag it down.

In a nutshell, that's the history of the J.D.K. Band series. The question is, does Falcom J.D.K. Band 2: Dark Fact's Counterattack carry on the general principle of excellence or does it fall short? The answer may not be as simple as you would think...

I'll be perfectly honest. I hated this album when I first got it, but I had a pretty good reason. You see, track 7 is an arrangement of "The Strongest Foe" from Ys III, one of the loudest, most exciting pieces to come from Falcom's arsenal. The Turbo Duo redbook audio version was a wonder to behold for its sheer intensity and the Ys III Perfect Collection version is a killer in it's own right. If there was anyone who was going to do this piece justice, it HAD to be the musical geniuses behind the J.D.K. Band... Or so I thought. Of course, this turned out to be the first piece I flipped to. This version just barely crosses the line between pretty good and mediocre. While it's fast, it completely fails to add emphasis to parts that need it, making for a very flat listen. For example, after the first loop, the Redbook version hits a high pitch, then goes into a wild guitar solo that lasts for quite a while before starting over. This version does... nothing. It simply loops around, adding a couple of driving sound effects (sirens, whooshing cars) that sound more cheesy than anything else. To make matters worse, towards the end of the second loop it doesn't come to any sort of conclusion: It just stops suddenly, in the middle of the track! I was almost in a state of shock. One of my favorite pieces from Falcom had been absolutely butchered. It's a bad arrangement, but the least they could do was finish it.

Was this the album that would change my opinion of the once-mighty JDK Band? Not wanting to find out the answer, I left this disc on the shelf for some time. Finally, I gathered the courage, put the CD in and listened. My verdict: Much better than Falcom J.D.K. Band 4, but not up to the high standards of J.D.K. Band 1 and 3. It turned out to be a rock solid album, consisting of five vocals and five instrumentals. The source material was spread out pretty well, covering Sorcerian, The Legend of Heroes, and Ys, as well as some more obscure Falcom games, like Star Trader and Dinosaur.

This CD starts out almost exactly like JDK Band 1, with a highly charged instrumental version of a familiar theme. While J.D.K. Band 1 used "To Make the End of Battle", this one uses the battle theme from Dragon Slayer: The Legend of Heroes. This version is nothing short of perfection, with perfect guitar work and emphasis on the parts that need it. This even blows Ryo Yonemitsu's Dragon Slayer Perfect Collection version out of the water. For track 2, we get another vocal of a track from "Star Trader", called "Moon's Scape". Like it's predecessor, "Go Fight", it features some of the worst spoken English known to man (in a good way, though) and a killer version of the main melody about halfway through. These two songs are nothing short of classic, making me wonder what the hell went wrong with "The Strongest Foe".

The other three instrumentals aren't quite as energized, but they are still excellent. Of the three, "Shake Your Heads" stands out with an often used tune from Sorcerian and repeats it several times, en route to another show of perfection. The drum work in this piece is simply amazing. The other two instrumentals, "Lute" and "Over the Top", are more there to show the versatility of the J.D.K. Band. "Over the Top" sounds like something you would play for a fallen soldier — heroic, yet sad. "Lute" is a soft, relaxing piece that you may never want to end, because it's so well done.

The vocals, however, don't fare quite as well. Ultimately, this is why I would pick J.D.K. Band 3 over this one. While I liked every track from that CD, three of the five vocals on this one qualify as dead weight. In addition to "Moon's Scape", "Down the Wind" is the only other notable vocal. Based on the field theme from Legend of Heroes, it does this excellent theme justice. On the other hand, "Mysterious Moment", "Judgement in Hell", and "Recollection" are just there. They have some interesting passages, but they would be about as average, maybe better, without the lyrics. I constantly flip over them as they get a bit tedious to listen to.

In the end, we have six excellent tracks, three "just good" ones, and one that you're going to hate if you've heard any previous version, but MIGHT like if you've never heard any other ("The Strongest Foe", of course!) Keep this in mind if you decide you want to track this album down. Frankly, Falcom J.D.K. Band 1 is a much better album and is much easier to come by (it's part of the Falcom Millennium Collection reissues) so I would only recommend this album to those who can't get enough of the first. On top of that, J.D.K. Band 3 has the best vocals in the series, so that is recommended over this one as well, if you like the vocals that is. If you decide you want this album, it can be a pretty hard find, though. I've seen it twice on eBay, but Yahoo Japan is definitely your best bet. I halfheartedly recommend it to everyone out there!


Tracks are arrangements of the following tracks: