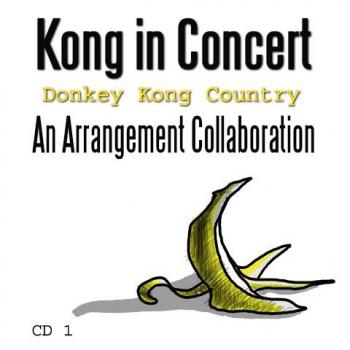 The early years of OverClocked ReMix's album releases were generally pretty grim. After producing a Super Metroid commemoration album in 2003, their second large-scale album production was Donkey Kong Country - Kong in Concert. Contrary to its name, this album does not feature symphonic performances or, indeed, any live performances at all. Instead it is a diverse bunch of mostly electronic remixes made with often low quality equipment. The resultant album definitely shines with ambition, but rarely quality or integrity...

The album opens an aspiring, yet poorly implemented, interpretation of the main theme in "Godiva in the Desert". Israfel attempts to hybridise together Arabian percussion, ethereal vocals, jazz-orchestral flutters, and, of course, OverClocked's trademark electronic beats into one arrangement. Series such as Phantasy Star Online have demonstrated all sorts of wild and wonderful fusions can be successful, but this is not one such example. The various elements are simply too opposed to each other to create a cohesive work, while the synthesis and balance often needs some work. Listeners are offered more interpretations of the series' main theme in the lounge jazz piece "Swing Monkey, Swing" and the contemporary jam "West Coast DK Island", neither to much success. The latter is let down by its clichéd writing and hideous synthesis of the saxophone lead, while the latter fails to recreate the same balanced soundscapes of the Jungle Level's darker portion with its 'anything goes' approach. Both are inspired conceptually, yet let down by somewhat weak arrangements and synthesis.

Probably the main probably with the album is that most of the arrangements are so stylistically derivative and amateurish. The saxophone-led smooth jazz interpretations of "Aquatic Ambience", the guitar-based folk wanderings of "Cranky's Theme", or synthy nu jazz soundscapes of "Ice Cave Chant" all fit the respective originals and expose the melodies. However, it's all too clear that most of the arrangers are simply imitating existing artists and few of them have really established any voice of their own. The result seems more like a stock compilation of stylistic examples than any sort of inspiring or cohesive collection of tributes that most would expect from professional arranged albums. What's more, those rare examples of creativity are often select tastes. I can imagine very few people wanting to listen to the meek male vocals in the blues piece "Funky Monkey Love", for example. In fact, they're even more cringe-worthy than the "DK Rap". This remix is neither "good", nor "so bad it's good", just simply "very bad".

There are nevertheless a few redeeming remixes in the collection. zircon manages to recreate the vibrancy and exoticism of the Jungle Level in "Faunaphonic". His approach is considerably more straightforward than his contemporaries — with its focus on techno beats and and a few ethnic samples — but he still makes it worthwhile by offering some sublime soundscaping and immersive beats. The collaborative rock arrangement of the boss theme surprisingly rescues the original piece from mediocrity; though it borders on clichéd in places, it generally stands high with its distorted and hard-hitting approach. "Cry of the Chasmal Critter Chain" and "Idols of Hanuman" also deserve some credit for their respective 'cello leads and percussion use, though both lack somewhat in other ways. After a mostly rambling and unsatisfying experience, the OverClocked ReMix round off the experience with a two part interpretation of the Gang-Plank Galleon — transitioning from a simple clanky piano piece into a generic rock anthem — before concluding with a surprisingly emotional interpretation of the credits theme.

In summary, while Donkey Kong Country - Kong in Concert is an ambitious and often inspired production, it largely does not fulfil its potential. Between the derivative arrangements, weak synthesis, and incohesive set-up, the overall album is quite weak. There are occasional excellent arrangements — and many transient passages of excellence — but the album fails to sustain a consistent quality. Thankfully, OverClocked ReMix have improved in the years since and many will prefer their second attempt at arranging the series' music, 2010's Donkey Kong Country 2 - Serious Monkey Business. Since Kong in Concert is free, there's still no harm in downloading it and checking it out if you have some spare moments.