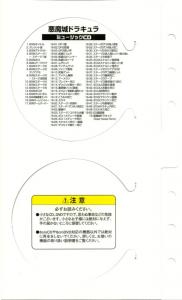 One of the lesser-known titles in the Castlevania series was 1988's Haunted Castle (aka Akumajo Dracula) for the Arcade. In 2006, the game was ported over to the PlayStation 2 as part of Hamster's Oretachi Game Center Zoku series. A bonus album was packaged with the game, featuring the original score for the title, a sound effects collection, and an exclusive arrangement.

Composed by Kenichi Matsubara, the music of Haunted Castle is more reminiscent of Castlevania II: Simon's Quest than the original Castlevania, with its rock emphasis. The biggest highlight is "Cross Your Heart", which firmly asserts the gothic rock sound of the series. The harpsichord runs are a delightful introduction to the track, while the synth melodies are the most memorable and rocking on the entire album. It's easy to see why this piece went on to be arranged for several subsequent Castlevania soundtrack. In addition to stylistic continuity, the soundtrack features some identical themes with Castlevania II, most notably the rocking anthem "Bloody Tears" in a straightforward but solid arrangement.

The rest of the score for Haunted Castle is a mixed bag. Tracks such as "Revival Dracula", "Wedding March Tragedy", and "Dracula's Room" convey the intended mood in certain events, but are too short and generic to be of interest. Action tracks like "Devil's Resurrection" and "Final Battle" also make difficult stand-alone listening due to their repetitive elements. Thankfully, there are a few other highlights here. "Don't Wait Until Night" quickly builds into a whisteable pop-inspired anthem, while "Clock Tower's Beat" is quite immersive despite its abstract components. "Basement Melody" blends influences of both of these tracks, to create something that is simultaneously catchy yet moody. The score ends on a bright note with the funky jingle "Sent to the Devil's Requiem".

The release closes with a bonus arrangement of the score by SuperSweep. This is actually a six minute medley that encompasses a large number of tracks from the score. The emphasis is put in the right places, with track such as "Cross Your Heart", "Bloody Tears", and "Basement Melody" making the biggest impact with their rock-electronic renditions. Nevertheless, Shinji Hosoe still maintains the dark aura of the score by incorporating an eerie opening segment, heavy boss themes, and ambient sound effects in a suitable manner. The only problem is that the transitions between the themes tend to be abrupt, but it doesn't stop the final track being an encompassing and enjoyable tribute to an underlooked score.

Overall, the score for Haunted Castle is quite enjoyable despite its brevity. While the event and action themes are mostly unimpressive, the score makes up for it with a memorable set of stage themes. Shinji Hosoe also nailed the score's sound for the bonus arrangement. This release is certainly worthwhile for those considering importing the PlayStation 2 title from Japan.

Packed in with Oretachi Game Center: Akumajo Dracula for PS2.


*1-19 Arranged by Takayuki Aihara
Album was composed by Кэн / Масахиро Икарико / T and was released on May 25, 2006. Soundtrack consists of 19 tracks tracks with duration over about 25 minutes. Album was released by Hamster.