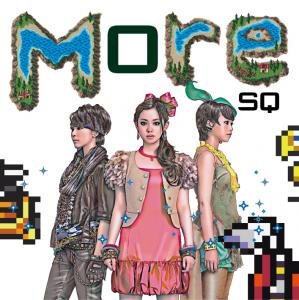 Despite mixed reviews, Chill SQ and Love SQ were considerable financial successes for Square Enix. In 2011, the company produced a follow-up that was even more diverse and expansive than its predecessors, More SQ. Featuring 13 arrangements by endorsed fan remixers like Electrocutica, RE:NDZ, and Rocketman, the album encompasses various electronic remixes, acoustic performances, and unexpected fusions. Yet, as with other albums in the series, its diversity in musicians and styles goes hand-in-hand with its inconsistent quality too.

The album opens with a rendition of the Final Fantasy series' "Main Theme" by Rocketman. The iconic melody is actually secondary to this remix, only popping up on the piano lead or occasional interlude, while the rest of the remix is comprised of uplifting techno-pop grooves. While parts of the arrangement are catchy, the stylings are generally too generic to impress and many will be alienated by the deviations from the source material. Courtesy of Chill SQ returnee RE:NDZ, the "Prelude" is also given an electrifying makeover. The contrasts between the beat-heavy arpeggiated parts and ethereal melodic parts are welcome, though the track labours its source material rather quickly. Another radical take on a series' staple, "Dugem de Chocobo" sustains its playtime better. Shisotex incorporates the original chiptune melody into a house remix featuring vibrant beats and voice samples. While many will find the main renditions of the melody obnoxious, the mix improves during the more experimental sections and is quite well-styled. It's bound to split opinions, but is nevertheless an interesting novelty.

Electrocutica is responsible for one of two Chrono Trigger arrangements on the album, an interpretation of "World Revolution". Understanding that rhythmic emphasis and timbral contrast were at the heart of the original, the arranger emphasises these features with energetic techno beats and diverse orchestral passages. The arrangement is far from perfect — it takes some time to get going and features some dubious choices of lead — but it is mostly enjoyable and interesting. Particular highlights include the ethereal interlude 3:40 and the surprising beatboxing parts. A more recent game is also featured on the album, namely "Kaine" from the award-winning Nier. sasakure.UK electronically distorts the original's soprano voice, but still retains the lyrical and spiritual quality of the original. With its blend of expressive elements and minimalistic chiptunes, the electronic backing is also enigmatic. This arrangement will surely divide fans of the acclaimed score, though it has its merits.

Moving on, one of the most enjoyable acoustic arrangements is Jabberloop's interpretation of Final Fantasy V's "Ahead on Our Way". The arranger brings out all the exuberance of the original melody with the jazzy trumpet leads, while the piano chords and drum kit keeps the track buoyant throughout. Even better are the various interludes, which include punchy Gilgamesh references and deeper orchestral writing. Like all tracks on the album should have been, the entire remix is a fine tribute to an underlooked theme and a classic game. Yet while the trumpet lead on "Ahead on Our Way" is beautifully performed, the one in Sakerock "Rosenkranz" suffers from a feeble performance throughout. With its superficial stylings and monotonous development, the entire take is a detriment to the original and listeners are advised to pursue Masashi Hamauzu's own arrangements instead. Special Others' take on Final Fantasy VI's "Searching for Friends" isn't particularly impressive either; the melody and timbres here are often beautiful, but the semi-acoustic stylings are somewhat contrived.

Considered a classic score in Japan, Live-A-Live makes an obligatory appearance with the final battle theme "Megalomania". Idiot Pop transforms the original rocking melodies with punchy piano chords and tropical beats to catchy and uplifting effect. However, the arrangement soon labours its source material and comes across rather superficial overall — something that might be produced in a quick jam session, but not worthy of publishing on an album. Another disappointing performance is Chrono Trigger's "Wind Scene". This track combines all the frustrating clichés — at least for a classical pianist — of amateur piano arrangements into one: slow parts focusing on overly sentimental leads, fast parts featuring hammering alternating octaves, pretentious parts emphasising flashy arpeggios, and even some unnecessary interruptions from non-piano sounds. Fan-turned-pro Christian Pacaud created a much more enjoyable version of this theme on this site several years ago without relying on any of these features.

Rounding off the diverse album are some jazz-based tributes to Final Fantasy favourites. One of the most experimental additions of the album, Final Fantasy VIII's "The Extreme" undergoes a liberating shift from its moody saxophone-led opening into the uplifting piano-supported opening. Mouse on the Keys writes for both primary instruments in a mature and creative way, demonstrating the musicianship many other contributors lack, and keeps the arrangement entertaining and emotional throughout. For the penultimate track, the Yusuke Hirado Trio transform "Melodies of Life" into a lounge jazz piece. While the arrangement is long-winded, the vocalist and instrumentalists make the most out of the material to offer an emotional tribute. The overall sound is relaxing without being trite. The album ends as it begun, with an interpretation of the series' main theme. However, in homage to one of Uematsu's favourite instruments, this track is performed by a recorder quartet. It's very nostalgic and charming finish.

Like its predecessors, More SQ is very hit-and-miss. With everything from extravagant piano-led jams, to chiptune meets house fusions, to lounge jazz vocal performances, the diversity of the album is impressive. However, the quality of the musicianship is also mixed here and not all of the arrangements were executed with the creativity and sensitivity needed for a tribute album. There are several impressive and surprising takes of the source material that will appeal to most, including "The Extreme", "World Revolution", and "Ahead on Our Way". However, there are also outright stinkers too such as "Wind Scene", "Megalomachia", and "Rosenkranz". More SQ nevertheless has more to offer than its predecessors, with its 13 track setlist and hour long playtime. It is therefore cautiously recommended for those looking for a comprehensive yet inconsistent tribute to Square's classics.