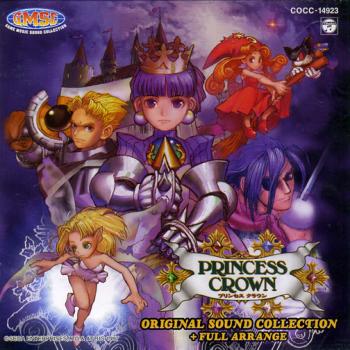 In 1997, Atlus released the Saturn action RPG Princess Crown, considered a predecessor to Vanillaware's Odin Sphere. Featuring an orchestral soundtrack by Toshikazu Tanaka, known for his work on the Power Instinct and Metal Slug series, it is a bit of a departure in terms of what I normally hear from Tanaka. The soundtrack was initially released in 1998 before being remastered and reprinted in 2011. While the recent release is easy to find, the original release features two bonus arrangements.

While "Princess Crown Opening" hybridises electronic beats and orchestral tones, the subsequent tracks are a departure from this soundscape, focusing purely on the orchestral textures of the opening theme. "Castle of Justice" opens with an overture that features some predominately regal tones, particularly in the brass and strings, it moves into a slightly more subdued nature at times, although it does retain its regal atmosphere. Militaristic percussion and orchestral swells help add a lot of texture to the piece. While not one of my favorite castle type themes, it does manage to convey such an environment quite nicely.

"Lonely Village" is a peaceful woodwind based town theme that gives off a wonderful soundscape. The combination of harp and strings in the accompaniment really manage to accentuate the atmosphere. The B section, however, is definitely a bit more melancholy in nature, with some beautiful brass harmonies thrown into the mix. Overall, it's one of the better themes on the album. The album also closes with "Busy Town," a playful accordion based theme with drumpad and village chatter sound effects. It manages to give off the impression of the title, but at the same time, some may think that the sound effects take away from the overall theme.

There are some more suspenseful themes that detract a bit from the overall soundtrack in my opinion. "Suspicious" uses clichéd horror elements, such as a strings harmony reminiscent of the Psycho movie, with some ominous brass and strings leads. While it does achieve the desired atmosphere, it's a very long track that, by the end of it, overstays its welcome. Similarly, "Mystery Wind," is a shorter ominous piece with a focus on frenetic strings, militaristic percussion, and ominous brass tones. Some mysterious tones are featured, particularly through the use of plucked strings. It's a much more appropriate length for such a theme, but does manage to get lost among the more colorful compositions on the album.

Speaking of more colorful themes, "Pleasant Season" is a particularly playful theme. The melody is pretty strong, and I particularly like the B section with the more waltzy strings that go quite nicely with the upbeat tuba rhythm. It's not the strongest theme, but it definitely has its moments. Similarly, "Funny Guy" is a quirky theme with an almost gypsy sort of sound. The melody line, played with an instrument resembling a sitar, is definitely the highlight of the piece, while the orchestral accompaniment help bring out the more playful aspects of the piece. An interesting piece full of contrasting sounds, even if the overall melody is a bit repetitive. Lastly, "Rest in Force" is a bright, cheerful theme focusing on xylophone and woodwind. There is a bit of a waltzy nature to it, particularly in the strings during the B section. It's a short theme, but satisfying.

Of course, this game also features a variety of battle themes. "Willpower" features frenetic strings work, at times, chaotic, with a largely brass melody. There are some playful moments, particularly with the use of xylophone and triangle. However, it's a bit tame sounding. "Cross Swork" definitely ups the intensity compared to "Willpower" with its militaristic percussion and compelling melody. Two sinister battle themes, "Mind of the Dark" and "Devil in the Alpha," are probably the strongest on the soundtrack. The former is dominated by chaotic strings and brass swells, though there are also some nice heroic moments in the B section that contrast quite nicely with the ominous A section. Lastly, "Devil in the Alpha," channels epic orchestral influences and is intriguingly contrasted with some xylophone passages. It's a conflicted track, but fantastic in context.

The album closes with two exclusive arrangements by Toshikazu Tanaka under the pseudonym Dencyu. He fleshes out the 45 second opening theme into a multitiered three minute arrangement. The opening ethereal section sounds more beautiful than ever, while the fast-past climax is peppered with funky synth improvisations. The samples still sound somewhat dated though. More beautiful is "People Get Happiness", where Tanaka transforms another short piece with soft piano passages and new age synth. One cannot help but wonder what Tanaka would have achieved treating more accomplished pieces on the original soundtrack instead, though. These arrangements aren't worthwhile selling points, contrary to the album's title, but they do give a slight upper hand compared to the reprint release.

In the end, I think that Toshikazu Tanaka's orchestral score to Princess Crown is a decent attempt. While it isn't as lavish as similar scores by Hitoshi Sakimoto, it manages to capture the spirit of the game quite well. Some themes do not work as well out of context, particularly the more suspenseful event related themes, but the town and battle themes are quite enjoyable on the whole. If you are a fan of the game's music, be sure to pick it up in either its original form with two arrangements or its recent reprint.

18,19 arranged by Dencyu
Album was composed by Тосикадзу Танака and was released on April 01, 1998. Soundtrack consists of 19 tracks tracks with duration over about 60 minutes. Album was released by Nippon Columbia.