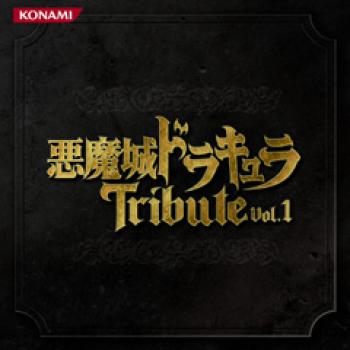 The Castlevania series is a very popular series featuring a variety of classic themes throughout the various generations and incarnations of games. A set of tribute albums related to this music featuring many famous names in the gaming industry was released in 2011. The first volume focuses on the idea "theme of a hero" and features mostly rock and electronic interpretations of classic Castlevania music. Featuring many of the more iconic themes, how does it manage to turn out?

The album opens up with the iconic "Vampire Killer," arranged by horror veteran Tsukasa Masuko. This theme is rather intriguing. I'm not sure why there have been so many disco-sounding versions of "Vampire Killer," but I guess the original seems to inspire this very atmosphere. Rather than just do a standard disco-themed arrangement, Masuko decided to add some Dracula voice over work into the mix, similar to Perfect Selection Dracula. It is probably very distracting to most people, but the music underneath is pretty gothic themed and it fits the setting of Castlevania quite nicely though. It's sure to be an arrangement that will split opinions.

Speaking of splitting opinions, I'm sure that TECHNOuchi's remix of "Bloody Tears" will prove controversial, solely for the fact that the original melody is a much underplayed element in this remix. Opening up with some references to the melody in a haunting music box and ambient synthesizer, it moves into a very haunting theme with percussion, ambient elements, some electronic garbling, and orchestral undertones that reference the original. I, on the other hand, find this remix to be brilliant. It manages to capture the gothic setting of Castlevania, and although the original isn't featured as much as most people would like, I can definitely appreciate TECHNOuchi's vision of a reimagined Castlevania.

Takuya Hanaoka's "Crucifix Held Close" actually opens up with a sinister organ version of "Wedding March of Tragedy, the preceding track on the original soundtrack, and it's quite a varied theme. The theme proper, however, is a progressive orchestral rock theme that really brings that rock edge that so many people love to the original music. However, at the same time, people may find the keyboard and drum synthesizer to a bit on the weak side and lacking punch. All the elements go together quite well though, giving them a bit of a retro sound, especially the electric guitar and orchestral harmonies. It's also quite nice to have some different tempos heard throughout the theme.

Motoi Sakuraba's take on "Beginning" from Castlevania III is another great remix on the album. It's done in a progressive rock nature, something the original seemed to be begging for, and he manages to keep the actual melody in focus more so than going through a long solo section. Of course, solo sections are still present and really remind me of his progressive rock work for the Star Ocean series. Some sections are sinister, some remind me of his live concerts, but overall the elaborations are definitely more melodically focused rather than chaotic in nature. While pretty typical of the arranger, it's a fun remix that builds over time.

My favorite remix on the album is definitely Aki Hata's "Clockwork." It's a high energy rock remix with some amazing solo sections. I really enjoy how the electric guitar, violin, and piano come together to create a dark atmosphere, but one with a delicate nature as well. The solo sections, however, are the true stars of the show. The violin is manipulated in a way to make it sound like a fiddle; the piano solo is classically oriented with a bit of a jazzy nature, and the guitar sections are quite powerful, conjuring images of a wonderful jam session. In the end, it's one remix that I can always go back to if I'm feeling in the mood for some excellent soundscapes.

Nobuyoshi Sano had the honor of remixing "Simon's Theme" from Super Castlevania IV. It's a fairly straightforward take on the original, which already had a poppy electronic sound if you ask me, though is better known for its anthemic rock and orchestral arrangements in recent years. While this arrangement will be too poppy for some, Sano manages to offer a breath of fresh air using electronic harmonies and slightly industrial beats. It doesn't do anything over the top or out of the ordinary, but is likely to get the body moving..

"Calling from Heaven," by Manabu Namiki, definitely conjures up images of Deathsmiles. It features a very gothic tone with an electronic, almost dance-like beat. Though not one of the arranger's greatest, I really like a variety of elements in this remix. The subtle harpsichord arpeggios serve as a wonderful harmonizing element, while the distorted violin and more prominent harpsichord in the melody line help accentuate the atmosphere of Castlevania. In addition, I find the haunting choral and brass harmonies that support the electric guitar melody to be strong as well. There's also an unexpected music box melody section that serves as a nice bridge between the more beat-intensive themes. It may not be as crazy as some of the other remixes, but I think Namiki managed to capture the Castlevania atmosphere while transforming it through his experience with shooters.

"Divine Bloodlines," by Yousuke Yasui, demonstrates his respect and love for retro music. The original theme is transformed into a chiptune remix with some organ and synth support. It definitely manages to show the charm of chiptune music as well as the strength of the original's melody. I'm also a fan of the different atmospheres it portrays throughout. The A section is more action oriented, while the B section, with its slower tempo, has a more uplifting and airy sound to it. The solo elaboration after the second loop is nicely crafted and really manages to incorporate the original melody quite nicely.

One of the other very experimental and controversial remixes is by Masafumi Takada. His version of "Slash" is definitely reminiscent of his recent work on Vanquish. It features a variety of electronic manipulation, and for the majority of the remix, the melody is only hinted at in bits and pieces. Those looking for a full-on rendition of the original will be sorely disappointed, but those willing to look past the experimental nature of the remix will find a hidden treasure, I think. Through his electronic manipulations, I think Takada manages to capture the more suspenseful tones of the Castlevania series, albeit in an unconventional way.

Yoshitaka Hirota's "The Wolf Revealed" definitely caters to his Shadow Hearts style. I love his use of distorted industrial tones, bass guitar, and solemn, haunting piano. The electronic beats incorporated as well really manage to go well with the overall atmosphere. Of particular success are the various tones the piano creates during the remix. At times, it's haunting and mysterious, at others, it's more uplifting. It's a fantastically dark remix that really captures some of the more sinister moments of the Castlevania series.

"Dance of Illusions," by Mitsuhiro Kaneda of Basiscape, is another fairly straightforward and potentially disappointing remix. His remix incorporates a sinister electronic accompaniment to the dramatic orchestral tones of the original. While it is pretty simple for the most part, I do enjoy the small flourishes and elaborations that Kaneda places in a few of the sections, particularly the airy, uplifting strings sections. Overall, it's an enjoyable remix, but may leave a bit to be desired for some.

Another remix that seems to be on a lot of people's favorites list is MANYO's "New Messiah." This theme features a variety of musical tones and instruments. There are some wonderful, frenetic violin passages that combine nicely with the pop style of the guitar and drums. In addition, the more progressive rock elements, with some unique synthesizer work and keyboard accompaniment really go well together. Another element of the remix that I enjoy is the more ambient sections that feature a bit of big brass sound to them. Throw in a great guitar solo and it comes together as a very well-composed arrangement and a departure from what I'm used to hearing from MANYO.

The album closes with Tenpei Sato's rendition of "Voyager" from the original Castlevania. With this remix, the Disgaea artist manages to demonstrate his mastery of emotion and the strings. The strings passages are enchanting, romantic, and dark and support the haunting vocals quite well. As the arrangement progresses, a full choir, which I suspect includes Tenpei Sato, is introduced and brings a bit of a darker tone to the remix. It's truly one of the most touching renditions of a Castlevania theme I have heard. In the end, this is a beautiful way to end the soundtrack.

In the end, remixing many iconic themes from a very enduring and popular series is bound to be a gamble in terms of overall enjoyability among the fans of the original music. In the end, I do think that this album, which places a focus on the idea of "theme of the hero," manages to express many of the more action oriented themes in a variety of intriguing ways. Yet while I enjoy the album very much, there are some remixes that some people may find to be lackluster or controversial. The score is not reflective of my enjoyment, but a reflection of the enjoyment most people have found the album to be thus far. I definitely recommend this album and most of my friends really enjoy it, but of course, due to the variety of styles, it may turn a lot of people away.