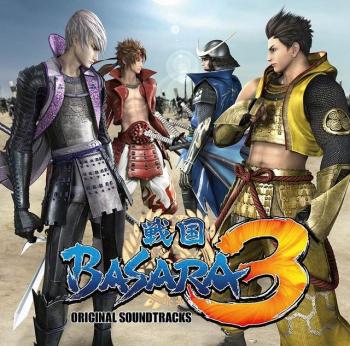 Released in the summer of 2010, Sengoku Basara 3 is the latest in a series of samurai-themed hack-n-slash titles published by Capcom. For this installment, a bevy of composers contributed, including anime legend Kow Otani, series' mainstays Rei Kondoh and Masayoshi Ishi, and indie-turned-pro Masahiro Aoki. Together they stretch the boundary of what I would have thought possible given the series' humble musical origins.

Rei Kondoh's portrayal of the main character offers a central highlight to the soundtrack. "Ieyasu Tokugawa's Theme" springs gamers into action with a fast-paced anthemic exposition. The melody is extremely memorable with its heroic tone and expansive shape, while the instrumentation builds excellently on the fusion sound featured in earlier instalments of the series. The cutting-edge orchestral samples and sparing traditional woodwinds combine with less authentic heavy guitars and heavy beats to immersive effect. Towards the end of the soundtrack, the theme is revisited with a solo piano contemplation that brings some much-needed depth and variety to the experience. It is recapitulated in the album's closing piece "Unification of the Land," a four minute epic featuring numerous contrasting sections and even richer use of orchestra, guitars, and shakuhachi. The interlude at 1:22 and secondary theme thereafter provides one of the soundtrack's most impressive moments.

Compared to earlier soundtracks in the series, the rock stylings are much richer on Sengoku Basara 3. Newcomer Masahiro Aoki (aka Godspeed) does an excellent job of bringing amazing guitar work to action-packed tracks such as "Violent Quake" and "Dead Heat". The extravagant stylings and lyrical melodies here are sometimes reminiscent of American greats like Van Halen, though Aoki still reflects the feudal Japanese settings with some impressive interjections with orchestral and traditional instruments. The primary melodies of "Sasaku Sarutabi's Theme" and "Yukimura Sanada's Theme" aren't quite as impressive — taken from earlier games in the series — but these tracks will still make the most of them with their dense electronic stylings and punchy development sections. Those looking for more serious fusions will find "Kanbee Kuroda's Theme" and "The Sixth Devil King Revives" satisfying. What these tracks lack in melody, they make up for in sheer rhythmic energy and timbral density. The latter is especially successful at the climax of the game with its incorporation of dark choral elements.

What's more, there are a good number of tracks that are more symphonic in nature and these tracks are generally used to portray the intense battles in feudal Japan's history. "The Battle of Nakatomigawa" a rather thrilling orchestrated wonder, featuring richer melodies and enhanced production to similarly styled themes in past titles in the series. Rei Kondoh's "The Mimigawa Ambush Battle" is a well done tense theme, which isn't overly grating despite its constant use of dissonance, while "The Kanegasaki Dream Battle" features hints of electronica overshadowed by the soothing melodies played by strings, shakuhachi and koto. "The Kanawakajima Frozen Land Battle" is another such example, drawing heavily from Asian influences, with its pervasive usage of shakuhachi. The soundtrack also features a handful of event themes, such as "Victory" and "Chance Meeting", that are serviceable in the game but somewhat dull on a stand-alone level. Thankfully their placement at the end of the first disc means they can be easily skipped and are less dominant than in earlier soundtracks in the series.

There are quite a number of tracks of curious genres and instrumentation sprinkled throughout the album. "The Winter Campaign of Osaka" sounds almost haunting with its opening, and continues to really stand out due to its gothic instrumentation, mostly the result of the chorus and harpsichord. "The Summer Campaign of Osaka," subdues the rocking bass line, focusing instead on the interweaving piano and string melodies to immersive effect. "The Oshu Running Dragon Battle" once again focuses on a fusion of rock and Asian instruments, but in a reverse manner to the main character theme. In this case, an electric guitar pumps out an addicting bass line, while the rest of the track exudes a large Asian influence. The piano is also a rather nice touch. A later example is the wonderful "The Battle of Sekigahara - Intrusion"; here too, another excellent melody leads an enjoyable and well-produced fusion forward.

There are also some more diverse character themes, mainly only the second disc. "Magoichi Saika's Theme" is a breath of fresh air from all the dense rock-orchestral fusions — written as an endearing flamenco with a shakuhachi thrown in for good measure. Sara Sakurai's "Tsuruhime's Theme" opens with a fun little synth section and develops a rather pop-like feel, while the reprise of "Keiji Maeda's Theme" from Sengoku Basara 2 is entirely jazz-based and is quite fun to listen to. An even more experimental fusion is "Sorin Otomo's Theme", which develops from its dark choral opening into a jazzy piece infused with a church organ and sitar. Finally, "The Abyss ~Nobunaga Oda's Theme~", is the most pounding rock piece on the entire soundtrack and incorporates the shakuhachi wails and ethnic chanting at just the right moments. It certainly fits one of the most brutal and formidable warlords of the Sengoku period.

Kow Otani also offered three cinematic contributions to the soundtrack. Filled with discordant harmonies on the strings and a constant beat, and lacking any set melodies, his pieces will be instantly recognizable to any fan of his work. The opening track "Bonds" is more of a curiosity than anything else — not necessarily a bad thing considering how masterfully Otani manages to grasp the listener's attention. However, the dense orchestral performance and sinister turns certainly capture the intensity of the action and the darkness of feudal Japan. Otani's other compositions, "Will" and "Life", are similarly styled and also benefit from a full orchestral performance. Highly reminiscent of his work on Shadow of the Colossus, the latter is a spectacularly emotional accompaniment to the game's climax and the most impressive cinematic theme in the series to date.

The composing team of Sengoku Basara 3 really pushed the boundaries of the series' musical foundations to offer its most diverse and appealing soundtrack. Whether the symphonies of Kow Otani, the rock jams of Masahiro Aoki, or the defining themes of Rei Kondoh, there is lots of highly memorable and emotional music here. In fact, there's hardly a boring moment to be found aside the occasional similar sounding track or dull event themes. The large number of excellent tracks tracks, which never drag on too long or feel too short, makes this a rather hefty release and good value. It's one that's sure to satisfy for lovers of the genres represented, and a good introduction to newcomers.