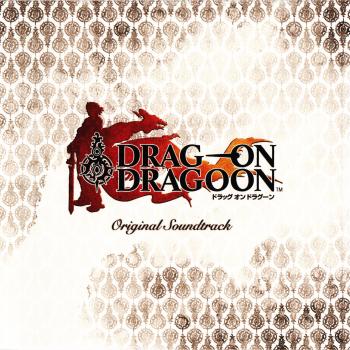 Drakengard was a title developed by cavia and published by Square Enix for the PlayStation 2. It was described as a cross between Panzer Dragoon and Dynasty Warriors with some RPG elements thrown in for good measure. cavia chose two of the most reputable composers in Japan, Takayuki Aihara and Nobuyoshi Sano, to handle the score. They took an incredibly unique and controversial approach for the soundtrack. Initially released in two limited edition volumes, the soundtrack was eventually reprinted as a two disc set in 2011 by popular demand.

Both composers had the luxury of working with the Tokyo New City Orchestra for the score. They recorded a mixture of familiar classical motifs with original music with the ensemble. This was only half of what they had in mind, however. After they were done the recording, the real fun started: they mixed everything to their own style. As techno music composers, they used more loops than you can count, and it has brought a very unique sound to the score. There are lots of famous symphonies featured here — from Dvorak's New World to Tchaikovsky's Swan Lake to Mahler's Symphony No. 5 — but there treatment here is completely unique and most samples are barely recognisable.

The beauty of exploration through music was an important motivation on Drakengard. in a way, I was interested in working on a musical concept I had heard explored by the Chemical Brothers. Through their influence, I thought about applying a techno design to reconstructing orchestral music. - Nobuyoshi Sano

The first track that catch my attention was Aihara's "Weapon Select". One of the few fully orchestrated tracks to be left untouched by their electronic manipulation, it reflects the majesty of the Tokyo New City Orchestra. Most of the track is based on repetition of col legno strings, creating suspense and eeriness. However, the well-placed viola samples give the track a wailing quality and the interlude from the 0:45 mark is nothing short of gorgeous. The track is certainly fascinating and beautiful, but above all it is intimidating: it reflects to gamers they are about to enter an epic wartorn world.

The rest of the score is mostly peppered with several mixed orchestral sample loops. Reflecting the highly dissonant approach of the stage themes, "Third Chapter Sky" is filled with looped choir chants and screeching ascending strings, before descending into a calamity of dissonant orchestration. It's an amazing twist on the conventional epic sound and really fits with Drakengard's world. "Third Chapter Above Ground" brings back the col legno strings in conjunction with orchestral breaks inspired by techno techniques. The chorus takes a more central role here with their ominous Latin chants, culminating in a short but dramatic climax at the 1:09 mark. It's quite an experience to hear such an odd but original piece both on the soundtrack and in the game.

Whereas Aihara's approach tends to focus on epic melodic orchestrations, Sano distorts and twists his pieces with results that are difficult to get into at some points. The best examples of this are the Chapter 8 themes. "Eighth Chapter Sky" sticks out like a sore thumb with its prepared string use, hammering piano parts, and electronically induced breaks. By the end, Sano pulls a piano hold, press, release pattern for nearly 10 seconds — it's insane. In addition to being musically fascinating, it is incredibly atmospheric — somehow ethereal and horrific all at once. "Eighth Chapter Above Ground" has Sano reflects his individuality further. It's truly distorted, repetitive to boot, but still addictive enough to appeal to some listeners. Not all will enjoy such unconventional and cacophonic tracks, but many will get used to his unusual approach and appreciating it for its originality.

Moving to the second half of the soundtrack, among the highlights are the warring themes for the secondary character — Leonard, Arioch, and Seere respectively. These maintain the same dissonant orchestral approach, but have some unique twists. Leonard's themes are comprised of stabbing violin motifs and loud sporadic orchestral bursts that have a slightly mischievous feel to it. Those from Arioch feature an unpleasant brass sample, which is looped constantly to the point of irritation. Those from Seere are a lot more enjoyable, with "Seere's Prayer Sky" featuring some of the richest orchestral loops of the soundtrack; they sound like something that might come from an action-packed medieval film, but of course are much heavier and looped.

One of the most beautiful tracks on the soundtrack is "Ninth Chapter Sky Two". Here Aihara shifts the focus from full orchestra to pipe organ for the first time in the soundtrack, yielding a dark and celestial sound. The first part of the track is truly engrossing, with the pipe organ creating a tremendous timbre in conjunction with the backing orchestra and chorus. The second section is more abstract with its repeated motifs and irregular motifs, but still highly effective. It directly transitions into Sano's "Ninth Final Chapter", where the pipe organ is almost completely swallowed by chanting chorus and piercing strings at relentless tempo. It's an epic climactic spectacle with some fantastic transient nods to the great romantics.

Although the Drakengard soundtrack is still rather niche, it is gratifying to see more and more game players' opinions resonating with the composers' original intentions. For my own personal feelings, I still like the originality and the intensity of the music. - Nobuyoshi Sano

One piece that needs to be mentioned is the ending vocal theme, "Route B Staff Roll Exhausted." Eriko Hatsune's voice seems to float above the pulsing dissonant strings and helps bring beauty to this repetitive piece. Sano has taken the liberty of playing with the volumes and distorting her voice every so often, creating an interesting effect. Overall, it's a decent vocal piece that was revisited in the sequel. But it is perhaps the "Route C Staff Roll" that best rounds off the release. Muted trumpet sirens, aggressive timpani rolls, and dazzling string runs on loop create a gigantic sound that reflects the war is far from over. Needless to say, it's not for all, but it is awe-inspiring.

The two volumes of the Drakengard Original Soundtrack are nothing short of extraordinary. Takayuki Aihara and Nobuyoshi Sano's sheer audaciousness here is truly remarkable; any composer who records a whole score with a reputable orchestra, distorts the creations through all sorts of electronic techniques, and releases it in game and soundtrack form to murder most people's ears is worthy of some sort of respect. That said, while the overall product is diverse and unique, but isn't subtle. Though the score features lots of intricacies, it is largely what one hears, and, to most listeners, that's something unpleasant, perhaps unbearable. Love them or loathe them, though, no albums are quite like Drakengard's.

Mussorgsky:
Pictures at an Exhibition