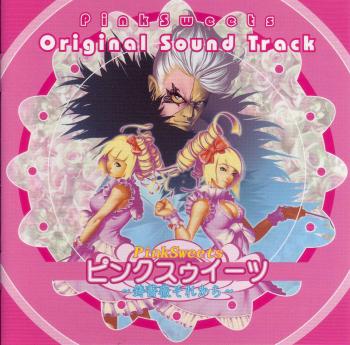 Cave is notorious for their manic shooters and even more so for their crazy soundtracks that accompany said games. The first game in the Ibara series was composed by Shinji Hosoe. It was comprised of mostly hard rock with a hint of industrial characteristics. I was eagerly awaiting the second soundtrack in this series, hoping for another similar album composed by Hosoe. That didn't happen. The fact that there was a large list of composers that I was not all that familiar with scared me, and even more so the idea that this album would be totally different from the last really freaked me out. I had nothing to worry about. Even though Hosoe is an amazing composer, and I was really upset that he wasn't present here, the lineup of composers here did this soundtrack justice. It did end up very different, however. Read on to find out more!

For those that were familiar with the first Ibara soundtrack, you will immediately notice the style here is totally different. The artists seem to have taken a trance / eurobeat approach to the compositions, and it actually turned out very well. The only deviations to this are the boss themes, which have more of a hardcore feel to them. "Drago Blu", the first boss theme heard, doesn't have any melodic properties at all. That's actually where it shines though. It allows for a high amount of suspense without drawing you in to the music so much that you lose the boss battle (it has happened to me before!). "Tigre Bianca" is slightly more focused. It seems to focus more on the beats instead of the mixing, making it again a very effective suspense builder. The two final battle themes, "Tartaruga nera" and "Uccello rosso", sound borderline psychotic. While they also focus on the beat, they leave nothing more to digest. It is just one long, looping, and insane beat. Some may not take to this, but I find it very pleasing.

The stage themes are where this album really shines. I have always been a fan of the first stage theme in most shmups. "Mama! Ora va!" has a very generic dance beat sound to it. It won't get a whole lot of originality points from me, but I still enjoy it. Another stage theme worth mentioning, as it is my favorite track on the album, is "Per salvare la madre". While the rest of the stage themes stick to the dance beat, this one decides to take a somewhat gothic tone. The organ, strings, church bells, and other Castlevania-like sounds are mixed with the techno beat and the result really seems to outshine the other pieces on this disc. Overall, I feel like while the "meat" of the stage themes weren't all that special, the beginning and end were enough to keep me focused through the middle.

I was quite shocked to hear the intro to the ending theme, "Sogno di rosa eterno ~ Nn ballo della rosa". It begins with a piano ballad playing a beautiful melody. This doesn't last long however, as the techno beat rears its head yet again. This track seems to have somewhat of a rock focus at times, which is a refreshing twist to the "happy" tunes found elsewhere on this disk. I rather enjoy the name entry track however. While it is very simple, the chiptune melody really blends in well with the feel of the game. The image track, however, is just strange. It is a vocal track with a very happy feel to it. It's fitting with the rest of the album, but on a standalone basis, it's really annoying. The rest of the original version consists of the two game over themes and a massive amount of voice collection tracks; none of which are worth mentioning.

Several really famous arrangers are present for the arranged version to the album. Kimihiro Abe takes on the first stage theme, taking it in something of a "lounge techno" direction, if that even exists. It is actually hardly recognizable from the original track! I am becoming more and more convinced everyday that Abe needs to be given a shooter soundtrack to compose solo with. This is a great example that he would do an amazing job. Staying on the idea of underappreciated composers, the next track exemplifies this fact even more. Mitsuhiro Kaneda provides us with an amazing rendition of the boss theme. The intro drags on for a bit, but once the meat of the track begins, you are treated to a more hardcore version of this piece. He does an amazing job, even if this arrangement stays close to the original.

One name I did not expect to see on this album was Yuzo Koshiro. He arranges three tracks on here, each of them showing a different side of his hardcore arranging skills. If you are looking for something that would describe the style he uses here, turn to his Wangan Midnight Maximum Tune albums. He pretty much uses his skills shown in those albums to make these tracks much better than their in-game counterparts. "Sorelle forti" is arranged in a eurobeat style, making it sound much more refined than the original. "Svolta!" is arranged in a hardcore trance fashion. The end result is a much more refined piece than Daisuke Matsumoto's version. His last track, "Per salvare la mia madre!", is just plain awesome. The organ from the original that made it so awesome is gone, but he brings in a music box to start us off, which really makes this piece have a more evil feel. The main melody of the track is comprised of various eurobeat and trance synths. This track was a very pleasant surprise from and even bigger composer!

The rest of the arrangers were a bit more expected. Shinji Hosoe, Ayako Saso, and Masaharu Iwata take on most of the rest of the album. Their arrangements here are very good, but not of interest to talk in depth about. The final arranger is who I can't wait to tell you about, and was also the biggest surprise for me. It happens to be none other than Saitama Saishu Heiki, known for his Gust arrange albums and Lost Child series soundtracks, as well as numerous other doujin game music arranges. Here, he doesn't rely so much on electric guitar riffs as he normally does. Techno synth beats take up the majority of the first two pieces he arranges, and they are incredible. The one that surprised me the most though was the arrangement of "Sogno di rosa eterno". Hearing the intro of this piece shocked me. You hardly ever hear SSH arrange a section with a solo piano, but he does it! It sounds almost exactly like the original with some minor differences. The meat of the piece is the interesting part. Somehow, he is able to pull together a rather disjointed track and make it more hardcore, and just more awesome. I prefer this version to the original, to tell you the truth.

Well, there you have it. The original soundtrack to this game has an incredibly cheesy feel to it, which is somewhat of a turnoff. After falling in love with the first one though, this might just be my mind wanting more of that. Either way, the original version is well worth your time if you are willing for something a bit different. But let's not forget about the arrange disc. That disc alone sells this album. With an arranging cast like that, there is no way anyone won't be at least somewhat impressed. Overall, this isn't Cave's best work, but it's still worth your money.

SE: Naohiro Saitou and three others.
Album was composed by Дайсукэ Мацумото / Kizakura / MASA-KING / MICHI"PAD-A" / Naohiro Saitou / Natsuko Naitou / Rieko Kakinuma and was released on December 04, 2006. Soundtrack consists of 42 tracks tracks with duration over more than hour. Album was released by Cave.