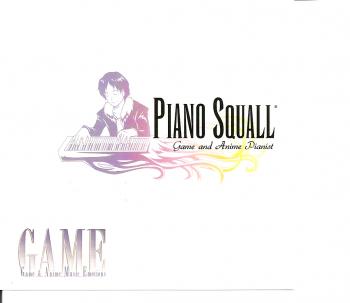 At the simplest level, Piano Squall's GAME: Game and Anime Music Emotions is basically a small selection of game and anime arrangements that is sure to leave fans hungry for more. Independently released in 2007 by Michael Gluck as a means of supporting The National Multiple Sclerosis Society, GAME is a bold and refreshing insight into the wide world of game and anime music, which is often unfamiliar territory for many 'mainstream' fans. Arranged for the piano, many titles on this album are familiar to knowing fans, except for the added piano flavouring which ushers a new and exciting twist to the tale. Having said this, do not be intimidated if some of these tracks seem foreign. Creating this review with little knowledge of many of the tracks on this album, I am nevertheless impressed by Piano Squall's flair and talent. But how so?

Following the original closely, step by step, the opener Chrono Cross' "Scars of Time" is funnily enough one of the few themes on the album that Michael Gluck has spent adequate time polishing to maximize its potential. Unaided by the heart-piercing violin, the solo piano's transition from soft reminiscing notes to an outburst of vigor and perhaps fury epitomizes overtones of loneliness and the desire, will power, and a furious motivation to escape hurtful memories. In this respect, it successfully mimics what the original sought to achieve. Quiet free-flowing notes, which highlight the stream of consciousness and a hope for a better future, finish off this track. But it makes for a rather dull closure, if you ask me. If his idea was to express the passion behind the original piece, then Gluck did a fine job here. However, the arrangement might disappoint those looking for more transformative arrangements.

Continuing with the highlights, "Cruel Angel's Thesis" from Neon Genesis Evangelion is definitely my favourite piece on GAME. This is largely due to the nostalgic melody, once presented on vocals, though Piano Squall also provides a solid performance. Starting off at a relatively moderate but steady pace, the arrangement begins to encapsulate tender memories or perhaps tragic circumstances the characters are destined to experience. While the chorus may seem to stutter awkwardly at times, unlike some other infamous game music piano pieces, the transition from note to note is much smoother. This further entrenches the touching melody into one's mind. The tremors caused by the start-and-stop motion of the hands evoke a tinge of passion that makes you at first unsettled, but eventually stirs up a positive perception of the piece. The vocal themes "Kiss Me Good-Bye" and "1000 Words" are also featured here. Piano Squall's performances manage to emphasise their emotional quality and, while occasionally a little clumsy, they're still bound to be fan pleasers.

Possibly the second most well known Mario theme, after the Super Mario Bros. main theme, Super Mario World's "The Athlete's Rag" is a relatively fast paced entry on this album. However, the fast pace means a complete lack of control in Piano Squall's — it often generates a lot of excitement for the untrained listener, but ultimately, it just wreaks havoc and confusion on the ears of the more experienced. What's more, it's cut short with a disappointing playtime of 1:11. If you like speed, "Dr Wily's Castle Stage 1" is more worthy of a visit. It may sound a bit jerky, but the nature of the theme in this context requires it to be so in order for it to be successful at sounding as fantastic as the synthetic original. Without the trotting nature of the theme and its related jumpy chords, it would almost certainly fail to please fans. The optimistic and pulsating piano here totally encapsulates the real essence of the theme. The use of a slower pace towards the end provides a dose of contrast that helps to highlight the effectiveness of employing tight rhythms.

The famous Final Fantasy main theme is initially presented in a straightforward down-to-earth version with little mucking around. However, one major criticism of Gluck's version is that it's way too high-pitched and overdramatic in the last half of the theme, forcing me to envisage a giant wrecking ball that demolishes a building that had so much potential to become great. I would have preferred something a little more controlled throughout the piece with subtle variations and then a nice outburst towards the end to finish it off. Instead this "Ending Theme" just seems cluttered with noisy outbursts of passion, which may appeal to some listeners, but it didn't really do it for me. I'll stick to the Piano Collections version instead. As for Tetris, "Korobeiniki" does a decent and mildly entertaining job of making things relatively easygoing for the listener. This is achieved by the slow dissension of notes and the shifting between the chorus and a sequence of fast drifting notes. It's not too long either so you don't get much variety. Simple can be elegant, but this may be too simple.

Drawing a parallel to the original big boss music, "Decisive Battle with Magus" comfortably retains the brooding pulse of its original despite the change of instrumentation. However, other aspects of it are not well suited to the piano because the eerie feel produced from the high-pitched synth notes in the original are compromised by the relatively monotonous keys of the piano. More skilful arrangement would have helped avoid this. Gluck could extended the length of this track to allow more time for it to build up to the chorus. Even the chorus seemed a bit rushed as well, as if Gluck wanted to get it over and done with quickly. Of all the tracks on GAME, this was a huge disappointment because it left me feeling totally incomplete and wanting for a lot more. What's here isn't horrible, but the theme is severely lacking in a true representation of the epic factor of the original. As for "Frog's Theme", the melody surprisingly suits the piano well and captures his noble yet humorous personality, but once again repetition is an issue.

Exciting but repetitive, the Cowboy Bebop arrangement "TANK!" is one of the best examples of the main downfall of GAME. The theme is actually quite fascinating to listen to for the very first time. Stampeding keys in full throttle with variations in pace make for a thrilling journey. There is also a touch of jazz and Arabian flair here. However, this great musical potential is just repeatedly overkilled instead of being developed, contrasted, and played around. This adds to the fact that the track time is quite short too. As a whole, this tune is a bit bland with not much 'replay value' because the chorus becomes stale when heard continuously. Utilizing a dejected tone and faint-hearted chords, Naruto's "Sadness and Sorrow" lives up to its name as a tragic piece dealing with rejection and suffering. Subtle variations in articulation create nuances that balance feelings of sorrow, pain, and a desire to flee from the past. Having said this, it's way too repetitive for me to be particularly enjoyable.

The Killer. If GAME were a TV channel, the battle medley would most likely be the special feature of the broadcast. But it's not all that jazz that others (and myself) have seemingly made it out to be. In one word, it's cluttered. I know Piano Squall was trying to be creative and mesh up the epic battle themes together, but it simply doesn't work in the way he intended. Tracks such as "Battle with Gilgamesh", "Dancing Mad", "One Winged Angel", and "Liberi Fatali" are all great melodies, but deserve more than brief renditions lasting less than half a minute. What's more, they produce a very uncomfortable listen when jammed together without proper transitions. I seriously would have preferred that he chose two or three themes from the list and then enhance those individually instead of cramming them all together with little breathing space. Overall, the supposed highlight "Final Fantasy Battle Medley" is really a clogged toilet that is difficult to flush.

Well just as a bonus treasure, listeners get a little composition "Boss Battle" originally composed by Michael Gluck and Michael Huang. It sounds pretty darn good as it vaguely parallels Nobuo Uematsu's work, but not surprisingly, it is rather short. Synthesised vocals chanting a solemn hymn are combined with a typical assortment of electronic gear like the electric guitar and touches of vibrant instruments like synthetic trumpets. They illustrate a fast-paced but cheerful battle melody. It doesn't sound like a conventional battle theme, but rather seems more appropriate for an intense battle between two friendly rivals; the sort of atmosphere you get when two best friends duel it out just to see who is better. There's nothing really nasty or evil about it, nor does it seem too casual, which strikes a fine balance for a battle theme. So, that's it! "Boss Battle" to seal the deal.

Overall, GAME: Game and Anime Music is a fun listening experience that displays many video game and anime music gems. However, it is lacking in true musical integrity because many of the tracks are hilariously short and underdeveloped. Jam-packed to save space if you will. Those taking an interest in just examining how an arranger such as Michael Gluck adapts his music onto the piano may be willing to purchase this, especially since it's for charity. But honestly, a keen musical listener might find that some of these tracks are severely short-handed both in terms of quality of the rearrangement and length. Fans will certainly be pleased by this album — if they bought it for a few particular themes. But I can almost guarantee that at least one track will make any hardcore fan flip in a bad way.

20% of the profits from this CD are donated to the National Multiple Sclerosis Society.

Track 17 is a medley of the following Final Fantasy themes: