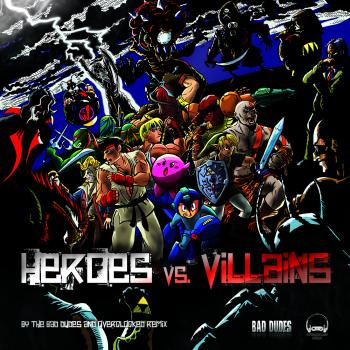 Heroes vs. Villains is an ambitious collaborative battle-of-the-remixes album pitting several famous hero themes against the themes of their respective villains. To provide the project with a good natured sense of group rivalry, the remixers from OverClocked ReMix handled the heroes while The Bad Dudes fielded the villain tracks. With twenty odd remixers contributing the project and tracks ranging in style from hip-hop to laconic jazz, there is sure to be something for everyone to enjoy.

A quick look at the track list may lead to some feelings of concern as certain match-ups (Teenage Mutant Ninja Turtles vs. Shredder or Samus vs. Mother Brain) are hamstrung by not having a classic theme readily accessible to many videogame music fans, while others (Streets of Rage, Monkey Island) may be too obscure to have their themes recognized. Bringing in more obscure themes and titles is not a bad thing, mind, as the sheer number of Super Mario Bros. remixes available is coming close to outnumbering the number of players who actually enjoy playing new Mario releases and it's great to see some variety in content.

One way in which Heroes vs. Villains shines is when the remixers play against the expected type. "The Life and Death of Kirby", remixed by OCR's Insert Rupee, puts a dark techno spin on Kirby's manically upbeat theme which is every bit as infectious as the original. Conversely, Street Fighter II's "Satsui no Koto" is exactly what you'd expect to hear for the remix of Ryu's theme, and OCR's Zircon does great job of integrating the Japanese koto with synthesizers and electronic drums to create a modern classic.

In terms of the "duels" themselves, there are quite a few good matchups on the album. Metroid's Mother Brain ("Dieselbrainage") and Samus ("The Bounty of a Brain") is one of them. "Dieselbrainage" features an exceedingly rare 7/4 time interpretation of the Super Metroid theme, which The Bad Dude's Mazedude turned into a rave-inspired drum 'n bass trip. The result is dissonant, driven and creepy, fleshed out with distortion effects and a great break at the two minute mark. Big Giant Circle's "The Bounty of a Brain" is extremely cinematic and drips with tension throughout, thanks to a repeated background chord progression, but isn't quite strong enough to take down "Dieselbrainage". That's OK, though... I like cheering for the bad guys.

Monkey Island pits "Pirate Shout", a hard rock sea shanty, against the ska-inspired "Voodoo, Roots 'n Grog". The latter mixes some excellent and intentionally silly trombone work with loose guitars that progresses into funk and some chiptune cheese at 1:55. Both are great tracks, although perhaps a bit limited in their appeal given the cult nature of the game. If you're looking to create a videogame music summer vacation playlist, however, they'll both have a place there.

The Legend of Zelda is creatively represented by a hypothetical Hyrulian hip-hop battle between Link and Ganon. Unfortunately, this falls a bit flat by being too "gamey" for hip-hop fans and too "hip-hop" for most video game music fans. Compared to some of the more recent nerdcore releases, the lyrical flow on both of these tracks, "He Ain't a G" and "Bladewalker", is simply too slow for the gimmick to be executed effectively. José the Bronx Rican's rapping in the latter doesn't even begin until close to three minutes into the remix, which is expecting a lot of patience on the part of the listener.

One of the most enjoyable bouts on the album is Mega Man ("Screw Wily, I'm taking a Vacation") and Dr. Wily ("Screw Mega Man, I'm taking over the World"). For Mega Man, OCR's Another Soundscape remixes the themes from Mega Man 2 and Mega Man 9 into a laid back, smooth jazz groove that shows the versatility of the artist wonderfully. The Bad Dude's Joshua Morse gave Dr. Wily a far more frenetic and fast-paced remix, which still has a nice jazz feel to it. I particularly loved the walking bassline and its natural progression into Mega Man 2's iconic Dr. Wily theme. It's an instant remix classic.

In the early days of video game remixes, the word "remix" was synonymous with either the unn-tss backbeat of house music or generic heavy metal guitar riffs. Both OverClocked ReMix and The Bad Dudes now avoid these clichés wonderfully, and the real beauty of Heroes vs. Villains is the sheer diversity of styles that are present on it. While every track will not appeal to every fan, there shouldn't be much of an issue justifying the cost of the album considering that it is free to download at OverClocked ReMix's site and so, as a bonus, there is also no buyer's remorse for torrenting the album for a select few tracks. I personally have left about half of them on my "VGtastic!" playlist don't see them being removed any time soon.