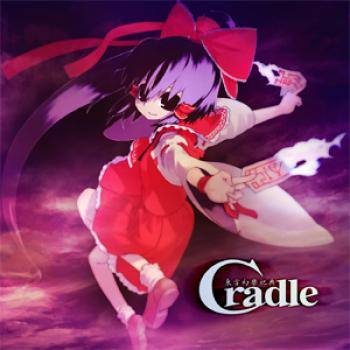 Touhou Gengaku Shiten -Cradle- was the first album released by Sound Sepher, the personal label of Shoichiro Sakamoto (aka Jun.A). It features arrangements of various themes from the highly popular Touhou series by a variety of doujin artists. Released at Comic Market 67 in 2004, the album set the foundations for an anthology of albums. The music is split into an acoustic side and a club side.

The acoustic side of the album opens with "A Soul as Red as a Ground Cherry" by setzer of MintJam fame. It begins with a beautiful piano and acoustic guitar passage before moving into some pretty awesome rock riffs and electric guitar melody lines. Doujin remixes certainly have their abundance of rock remixes, but I find setzer to be one of the best rock remixers on the scene. It's not the longest remix, but it sure packs a punch in terms of energy and is quite a fun listen.

Of course, another famous rock remixer is Saitama Saisyu Heimi. On this album, he's featured on both the acoustic side and the club mix side. His acoustic arrangement, "Illusionary Night I," features the standard S.S.H. fare, with a mixture of electric guitar melody lines, power rock riffs, and some nice synth work as well. It's not my favorite remix on the album, but it is certainly entertaining. "Song of the Night Sparrow," by Akihito, also falls into the rock remix category. Similar to S.S.H., this remix features a focus on speedy guitar riffs and some killer guitar work. In addition, he also throws in some nice piano harmonies that really serve as a very striking contrast to the energetic rock. There also some beautiful piano and electric guitar solos strewn about to create a very powerful arrangement.

Nauts, who has composed for some Korean MMORPGs, features in a nice arrangement of "Apparitions Stalk the Night." It has a 70's funk sort of sound to it, with some brass accents, a groovy bass guitar line, and slick jazz flute passages. Throw in some nice retro sounding synthesizer work and some soulful vocal samples and it's a pretty fun remix that definitely manages to impress. Another Korean composer, ESTi, is also featured on the album. While I'm more familiar with ESTi's electronic works, I find his beautiful rendition of "Phantom Ensemble" to be a very nice change of pace for me. The piano work is quite lovely and really has a lot of emotion in it. At the same time, I love the percussion and Asian instrumentation, such as the shamisen, as it really adds a beautiful tone to the entire mix. The ethereal synth that is used as an accompaniment makes the track seem as if it has a dreamy quality. In the end, this is definitely one of the best Touhou arrangements on the acoustic side.

supply's "Plain Asia" manages to create a beautiful Asian jazz vibe. There's some fantastic jazz percussion and rhythm combined with some frenetic piano and some Asian strings samples. It's a fun remix as well and while the piano doesn't differ much from the original's piano work, it's still a wonderful addition to the elements he did add. "Bloom Nobly, Cherry Blossoms of Sumizome," by WORRY, is another wonderful addition to the acoustic side. It features some wonderful electric guitar work that really goes well with the pop strings accompaniment. However, I find myself enjoying the slower sections more so than the more upbeat electronic sections, especially when the choral tones are inserted. There are some beautiful keyboard accents as well, and although they may not do anything crazy, they definitely help add to the overall retro atmosphere provided.

There are also a few ethnic themes featured on the album. "Lunate Elf," by Eiichiro Yanagi, manages to convey a French atmosphere through its prominent use of accordion, however, at the same time, there is definitely a bit of Spanish air thrown into the mix as well through the use of flamenco guitar. It's definitely an entertaining listen. "The Fantastic Legend of Tohno," remixed by Eru, also seems to incorporate a bit of a French air through its use of accordion, however, rather than adding some Spanish elements, there are definitely some more Celtic and tribal influences in this remix because of the percussion and woodwind themes. It's not one of my favorite remixes, but it does manage to transform the original into a more worldly theme.

Godspeed, mainly known for his guitar work, takes "Doll Judgment" and transforms it into a beautiful orchestral theme. It's a very powerful theme that features some beautiful strings melodies and harmonies; however, I find the piano sections to be particularly mesmerizing and really helps create a nice sense of mystery throughout the theme. It's a beautiful theme and one of my favorite remixes on the acoustic side. Another orchestral theme, "Nostalgic Blood of the East ~ Old World," by Kurenainagi Tabibito, manages to also convey a sense of power, but at the same time, also has a more uplifting atmosphere. I particularly like the woodwind passages and the inspiring strings work. In the end, it's a very nice remix and definitely takes the original and transforms it into something majestic.

The club mix side of the album offers more electronically oriented approaches to the music of Touhou. "Border of Life," by Kurenainagi Tabibito, is a trance theme, but at the same time, I find it to be a bit amateurish in nature, especially having heard other remixes of this theme in a similar style. I do enjoy that there are sections that focus more on the instruments rather than the beats. I do think that the orchestral portions of the remix are quite lovely, but the actual electronic component doesn't garner my attention to much. It's enjoyable, yes, but at the same time, I don't mind skipping over it from time to time. Lix offers a very pulsing rendition of "Beloved Tomboyish Girl." It has a very energetic approach and the beats are intense and penetrating. In addition, I think that the trance melody really works well with beats and the layered melody lines also really manage to send a positive vibe.

"The Doll Maker of Bucuresti," remixed by WORRY, seems sorely misplaced on this disc, unless of course, you were in a jazz club. It's a pretty smooth remix and I do enjoy the playful brass and jazz flute sections of the melody and the beautiful piano rhythms combined with the synth melody from time to time. It's one of the sexier remixes on the disc, but would feel more at home on the acoustic side.

Shoichiro Sakamoto, whose circle published this album, only actually contributes one remix to the album. Although it doesn't follow the more electronic counterparts, it definitely feels more at home than on the acoustic side. "Locked Girl" opens up with a sinister music box melody before moving into an intense Asian synth rock theme with some intense percussion and some carnivalesque brass work. It's an intriguing remix for sure and really does justice to the original. The percussion really manages to give off an extremely mystifying rhythm despite being rather straightforward.

Tsukasa Yatoki's remix of "Necrofantasia" is quite amazing as well. It opens up with some sinister electronic tones and some Asian sounding percussion before moving into a sexy electronic theme with some sick rhythmic percussion samples, smooth synth melody passages, and faded trance sections as well. It's a dark version, with some more hopeful sections at times, of the theme but manages to really drive this feeling of impending doom into the listener. This is one of the best remixes on the album for sure. Saitama Saisyu Heimi's "Illusionary Night II" is his second take on this theme for this album is rather lackluster compared to some of the other themes on this disc. It is, in essence, the same remix as his "Illusionary Night I" but with an intense techno beat and synth rather than electric guitar. It just seems a bit lazy to me. I much prefer his guitar arrangements.

"The Capital City of Flowers in the Sky," by zts, is a stunning remix that opens up with an extremely beautiful and ambient take on the original before moving into a very club-like electronic theme for which I recognize his music. There are so many elements to this remix. At times, the electronic sections are more trance focused, at other times, more like house music. At the same time, I do appreciate the inclusion of organic instrumentation, particularly of the Japanese variety. It really manages to create a varied and intriguing mix, especially given its length. The synth melody lines are also quite futuristic and definitely remind me of the more futuristic shmup soundtracks.

"U.N. Owen was her?" is one of the most famous Touhou themes, I think, in part due to the Japanese Ronald McDonald remix on YouTube. The remix, by Yuu, features a lot of interesting elements, such as some jazz piano elements and some strings work. However, the varying tones, tempos, and electronic accompaniments help to keep the remix sounding fresh throughout. The synth is a bit on the weak side, especially when it comes to the synth, but for the most part, this is a solid remix. "Paradise," by JOYH-TV," has a very electrohouse theme to it and is a solid interpretation to what I would consider worthy on the club mix side. The atmospheric sections and the synth focused melody lines manage to really combine nicely with the house beat. It's a soothing remix, but one you can still dance to, should you feel so inclined.

In the end, Sound Sepher's first release manages to feature a variety of styles, both on the acoustic and club mix sides. However, some may find some of the arrangements to be lacking in their synth quality and some remixes do come across as a bit amateurish. There is plenty to enjoy though and, given the variety of artists, it is impressive for a first release. I enjoy the club mix side the most, but there are plenty of gems on the acoustic side as well. If you are a fan of a majority of the doujin artists, or the Touhou series as a whole, this album may be for you.

Track 1.17, "Charming Domination ~ Speed Fox!", was used in a special version of Touhou Youyoumu used for a score attack tournament at the first Hakurei Shrine Reitaisai on April 18, 2004.