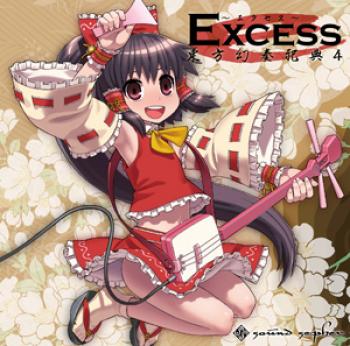 Released at Comic Market 78, Excess is Sound Sepher's fourth Touhou remix compilation. It features many recurring artists, such as members of SuperSweep and prominent doujin artists. With the releases from the label growing more frequent, does Shoichiro Sakamoto and co. manage to maintain the same quality as earlier albums?

Shoichiro Sakamoto, who contributes four remixes to his fourth Touhou remix album, opens up the album with "Imperishable Night ~ Eastern Night." This version sounds like a resynthed version of the original. It doesn't particularly add any new elaborations developments, but the lush accompaniment and percussion manages to bring the original a new breath of life. Similarly, while "The Mystery in Your Town," for the most part, doesn't do anything crazy or novel to the original, it vastly improves upon the lackluster brass synth in the original by replacing it with Sakamoto's signature synthesizer sound. There are some great moments where he manipulates the tempo and rhythm to add of excitement to the mix, but for the most part, I'm glad to hear the theme with much better sounding synthesizers.

"Faith is for the Transient People" manages to add some new elements to the original, without going to crazy. For instance, it's nice to hear a much cleaner sounding version of this theme and the use of acoustic guitars and some beautiful strings harmonies help give the theme a bit of a rustic feel. The calmer sections and the piano improvisation harmonizing sections really help bring some nice ideas to the latter half of the remix. Sakamoto's last remix is one of my favorite themes from Mountain of Faith. "Fall of Fall ~ Autumnal Waterfall" manages to bring a nice rock edge with some progressive keyboard work to the original. The flute and guitar riffs go together quite well, as do the addition of the synth melody line. During the latter half of the remix, the beautiful piano runs from the original are introduced, with a slight variation. It's a beautiful rendition of the original. While Sakamoto's remixes don't push any boundaries, they offer a nice update to the originals and he manages to use his signature synthesizer sounds and small variations to improve upon the originals.

Of course, other members of Supersweep are once again featured on the album. Takahiro Eguchi, who debuted on Touhou Gensou Shiten 3 -Deary-, returns with two remixes. The first, "News Hound," has a very ethnic sound to it. Opening up with some clapping, sitar sounds, and some exotic percussion, it provides a small hint as to what's to come. Particularly of interest, to me, is the beautiful melody. It has a very Celtic sound, with subtle woodwinds harmonizing with what sounds like an accordion synth. It makes for a very interesting combination. In between the more cultural sections, there is an ethereal, futuristic synthesizer that sounds like it would be perfect in a Phantasy Star Online game. It's a wonderful remix that fuses together terrestrial and spacey soundscapes. Eguchi's other remix, "Evening Primrose," is much more similar to his Nanosweep contributions. Featuring a beautiful electronic soundscape, he manages to provide a mellow, yet emotionally intense, atmosphere with some fantastic trance melody lines. There are some stunning piano lines, which while subtle, enhance the overall experience as do the variety of synth harmonies that Eguchi manages to create in this layered, but deceivingly simple sounding, remix.

One of my favorite remixers, both in Touhou and in general, is Ayako Saso and she returns with a wonderful remix of "Bloom Nobly, Cherry Blossoms of Sumizome ~ Border of Life." I really like how Saso incorporates Asian elements into this predominantly trance and piano theme. It really helps add a distinct flavor to an already fantastic mix. Her use of piano is extremely delicate and goes really well with the electronic accompaniment. As the remix progresses, she changes the musical key and it's here where the piano really comes to life. It's surprisingly what a small shift can do, but it seems to give the remix a bit more delicateness. The last SuperSweep remix is "Fires of Hokkai" by Yousuke Yasui and it is, by far, the best remix on this album and the best remix of the theme I have ever heard. While Shoichiro Sakamoto had remixed it on a previous album, into a resynthed version of the original, Yasui really manages to take it to an entirely new level. Opening with the heartbeat sound effects of the original and adding in some beautiful crystalline synth and some ethnic flair that sadly doesn't reappear in the mix, it manages to create an ethereal atmosphere that is continued throughout the remix. I really enjoy how this remix builds up, both in terms of melody and atmospheric accompaniment. The guitar riffs and electric guitar melody glide so wonderfully with the heavenly synth. It is a stunning remix that takes the original to levels that I couldn't even imagine.

Of course, there are also five remixes from prominent doujin artists, and one that I have not heard of before this album. "The Youkai Mountain ~ Mysterious Mountain," remixed by newcomer, at least to this circle, Sorabu, is quite fun! Opening up with a photo shoot sound effect, it moves into a groovy piano rendition of the original before adding some really interesting synthesizer effects, such as things that sound like missiles firing and some pretty neat echoing effects. As the remix progresses, it moves from an atmospheric section into a Asian inspired trance theme with some wonderful synth harmonies. Eventually it moves back into the groovy piano sound of the beginning of the remix. It definitely is interesting to hear two totally different styles in the same theme and manage to be successful. "Oriental Dark Flight," by Yuu, does some interesting things and I think it's more successful overall than his previous remixes in this Touhou Gensou Shiten series. It features some heroic brass and some wonderful piano sections as well. However, I think the real star of the show is how he makes some of it sound as if he's playing them on an old speaker radio. Overall, it's a good remix, but one of the weaker themes on the album.

One of my favorite remixes from the doujin artists is "Flight of the Bamboo Cutter ~ Lunatic Princess" by Eru. It's a great techno remix with some stunning trance accompaniment and some exquisite piano work. I really like how he alters the tempo and rhythm of the piano to really create a heightened sense of emotion. I wouldn't mind dancing to this in a club! "Maiden's Capriccio ~ Dream Battle," by Lix, follows a similar progression as Eru's remix. However, it manages to capture a dream-like quality with the ethereal synth lead and piano. Combine that with some nice club beats and the result is a pretty chill remix to which you can relax. The album closes with "The Gensokyo the Gods Loved" by zts. This is another fantastic remix in the same vein as the previous two albums. However, it is definitely more complex in terms of overall design. There are sections that feature more house-centric beats with a wonderfully subtle melody line that adds a bit of inviting warmth to the remix and sections that focus more on the ambient electronic sections without any heavy beats. It's a stunning mix of varying soundscapes and I think zts closes the album with a perfect song to help you unwind.

In the end, while not as stylistically diverse as its predecessors, Touhou Gensou Shiten 4 -Excess- manages to achieve a similar greatness. Shoichiro Sakamoto brings some beautiful updates to the original themes by ZUN by adding small touches here and there and some upgraded synthesizer. The rest of SuperSweep manages to create some intoxicating remixes with a varied approach, and while most of the doujin artists opt for an electronic focus, most of them are done quite well. The last three remixes, while all similar in approach, manage to differentiate themselves from one another through unique manipulations of the original. In the end, most of the remixes are quite strong and this album is definitely worth a listen.