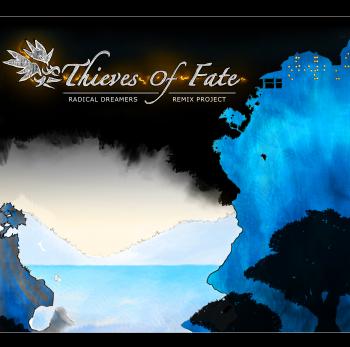 Radical Dreamers: Thieves of Fate is one of the latest outings from the video game music group OverClocked ReMix. Released on January 5, 2008, the project attempts to capture the essence of the somewhat obscure Radical Dreamers, a game released only in Japan on a SNES add-on. Related to the famous Chrono Trigger and Chrono Cross, and composed by the same composer Yasunori Mitsuda, Radical Dreamers features many of the same musical themes as the rest of the series. In fact, some tracks from Radical Dreamers were later utilized verbatim in Chrono Cross. Drawing upon excellent source material, Thieves of Fate is a pretty good game remix project. While it might not surpass the high bar set by other fan-mixed Chrono projects like Chrono Symphonic, it is still among the best video game remix albums out there.

Any avid gamer will immediately recognize Thieves of Fate as originating from the same series as Chrono Cross, which is an accomplishment. It's hard to capture the original composer's style while still adding the remixer's own voice to the work, but the 12 artists who participated in the Thieves of Fate project did so flawlessly. There is no mistaking that this album is Mitsuda's work to the core.

The first half of the album contains two sets of two separate remixes of the same tracks: "Days of Summer" on tracks 1 and 2, and "Strange Presentiment" on tracks 5 and 6. All four of these tracks are decent and are worth a listen; in particular, "Thieves of Fate" is one of the best songs on the album. However, I didn't see a reason why it was necessary to put these tracks back-to-back in the track order. The album would have been more effective if the tracks had been spaced apart, not only so that the listener didn't get tired of the same melodies, but also to add even more coherence to the album. As a side note, it's strange that "Sexy Boy" isn't included in the compressed archive download of the album, but is listed in the tracklist and is available for download on the project's website. Those downloading the album should remember this error and get the extra track separately.

Another track worth highlighting includes "Requiem for Another World," a vocal track that stays true to the original and which does not attempt to go "over the top" by hitting high-pitched notes or screaming the music. Of all the tracks included in this album, Ross Kimet and Fishy's "Hallucinogenic" makes the greatest impact. The listener is jarred out of the complacency to which he or she has grown to be accustomed in the first second of this haunting melody. Listening to this track just a few days before Halloween, I can see myself adding it to the list of horror songs that I'll be blasting out the windows to scare trick-or-treaters! The artists took chances with this one, and they clearly paid off in a unique mix that is a high point of the album.

But if "Hallucinogenic is a high point as previously claimed, then the only place to go is down. That's exactly what happens in the next track, "Confronto Finale," which is supposed to be the final confrontation of this storyline. I've despised Mitsuda's final battle themes for as long as I can remember; while he claims that he is a student of "minimalism," I believe that he ruined Chrono Cross by orchestrating the final boss with a few sounds of wind whistling in the background. Here, Tweek was trying to do the best with what he had, but his efforts failed. The music doesn't sound like a final confrontation at all and, at best, it's a normal battle theme that still lacks urgency. The production of this track is muddled, so that instead of clear, piercing trumpets, the sound is like the entire brass section decided to put mutes in their instruments but still blow as hard as they could.

Unquestionably, the collaborators of Thieves of Fate saved the best for last. "Le Tresor Interdit" accomplishes what most video game remix albums are unable to do — it sounds like a fitting ending. The excellent improvisation takes this song to a new level, and the listener hears the theme of Radical Dreamers fully realized. Of all the remix albums from the OverClocked community, Thieves of Fate is the only major collection (as of the time of this writing) that convincingly manages to create a beginning, a middle, and an end.

Thieves of Fate is among the best of OverClocked ReMix's album projects. It contains just the right mix of adherence to the source material and originality to make something new out of a series where the music has been killed by being overremixed. There are a few problems, such as muddled production at times and tracks being repeated back-to-back unnecessarily, but the key to Thieves of Fate's success is that the coordinators don't attempt to put together a massive conglomeration of four discs' worth of music. Instead, they carefully chose which pieces to include, and surely rejected submissions that were of lower quality or which didn't fit with the style of the album. It's a shame that OverClocked ReMix didn't learn the lesson of restraint in track selection with its later albums. This album is worth your time, and it's free. If you're a fan of the Chrono series and want more music from it, go download it right now if you are able to.

Directed by the prophet of mephisto.