Relics of the Chozo: A Super Metroid Musical Collaboration 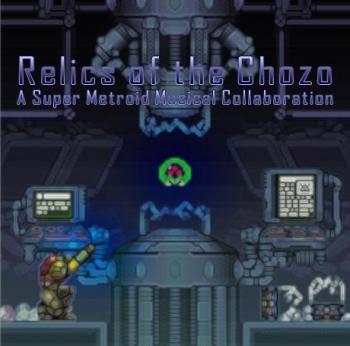 Relics of the Chozo: A Super Metroid Musical Collaboration
Front

Relics of the Chozo, OverClocked ReMix's first game music arrangement album, is based upon the SNES's Super Metroid. Despite being an early work for the community, it is not your average collection of guitar-based rock that's been popular in fan-arranged music around the turn of the decade. Atmospheric, creepy, and haunting, the music perfectly captures the essence of a game where the protagonist finds herself tunneling under a barren planet in the vast reaches of space. But while the music might be unique, the listener's experience turns out to be little better than the average album. This is a great work to play as background music in a haunted house, but it's too repetitive and lacks the variety necessary to be something you'll listen to on a daily basis.

This is unique stuff, even among a community that is known for deviating from the norm. Most tracks in Relics of the Chozo lack a clear melody, instead relying on the background instrumentation and harmony to carry (or not carry) the tracks. I don't recall the original tracks from Super Metroid being so lacking in melody. It's not only the melody that's missing from many of the tracks in this multiple-artist, 19-song collection; many of the conventions of the Western music system are also thrown out in the process. Some artists don't use a single consonant chord in their entire pieces. Many songs could be described as chromatic, and there's even hints of atonality in places. To ratchet things up, a few composers decided to throw out the entire concept of meter altogether. Try counting out beats for some of these songs, and you'll find the task impossible.

The goal, obviously, was to create as uncomfortable a musical environment as possible in order to match the uncomfortable creepiness of the planet Zebes. There's no better way to make people uncomfortable than to write dissonant, chromatic music that lacks any semblence of a regular beat. Being uncomfortable is fine, but when the discomfort is mind-numbingly relentless for close to an hour, something needs to change. That's the main problem with this album; there is no relief at all until the very end.

There are many songs here that fans of the game will recognize. I hadn't played this game or listened to its music for 15 years, and the album still brought back memories of trying to survive in Brinstar, of fighting Mother Brain, or of trying to escape the planet before it blew up. The latter two events are particularly well-represented in "Perceived By Cold Intelligence" and "Escaping Retribution", which change pace from the otherwise slow and atmospheric music. "Escaping Retribution" improves upon the original and makes it seem as if the world is truly falling apart, which it literally was.

Some tracks allow the melodies to stand out more than others, such as "Hostile Abduction", one of the game's first battle themes. "Sudden Death" picks up at the halfway point after a lackluster start. In general, however, I wasn't very impressed with the battle themes, as they didn't stand out from the rest of the music as they should have. Those listening without the tracklist in front of them will be hard-pressed to distinguish the battle themes from the normal stage themes. After a strong start, the tracks begin to meld together, especially since some of the tracks appear to have been produced with gapless playback intended.

A problem contributing to the lack of variety is that some tracks on Relics are too long. "Evil Aroused" is boring and repetitive, while "Traversing the Beyond" needs more instrumentation to carry it for the length the artist intended. Likewise, "Vast Inner Depths of Brinstar" repeats the same phrases over and over. Since many of these tracks feature the same instruments — usually synthesized orchestra with a low bassline rumbling in the background — the repetition issue becomes especially apparent. Changing up both the instruments used in the same songs and those used across the album would have gone a long way towards improvement of this collection.

In conclusion, if Nintendo were looking to re-release this title as an improved version on its Virtual Console, then this soundtrack would be a good selection for the job. However, I'm not as sure that many listeners will enjoy it as a standalone work. The collection is lacking in variety, and encounters the opposite problem that many of Overclocked ReMix's other albums have — all of the artists sound the same. Relics starts out strong, and ends strong, with little in the middle to shake things up and retain the listener's attention. There's only so much slow and creepy horror music one can take at once. The collection is free to download at Overclocked ReMix's torrents site, and is probably worth a listen simply because it's different and the price is right. Don't expect to be humming these tunes on your way to work, though.

NOTE: Tracklist is corrected for titling format inconsistencies from the information located at the album's homepage.