Summoning of Spirits: An Arrangement of Music from Tales of Phantasia and Tales of Symphonia 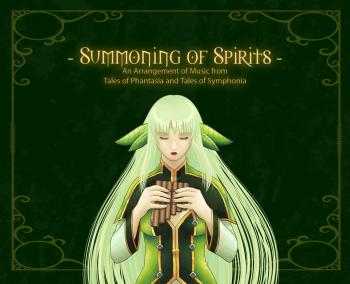 Summoning of Spirits: An Arrangement of Music from Tales of Phantasia and Tales of Symphonia
Front
Covers release: Kureejii Lea

Summoning of Spirits is one of Overclocked ReMix's most ambitious albums. Clocking in at 50 tracks, you'll find yourself listening for nearly three hours to taken in everything there is to offer. Based upon Namco's Tales of Phantasia and Tales of Symphonia, the four disc set covers a wide variety of genres, includes a huge number of artists, and runs the gamut of game scenarios, from towns to sad scenes to battles. Almost everyone will find at least one or two tracks to like here. However, production difficulties and poor project decisions squander a great deal of the potential for this ambitious work.

I should begin the review by disclosing that I have only played one game in this series, Tales of Vesperia, which is not featured on this album. If you have played the two games featured here, the music will probably bring back memories and you will undoubtedly have a higher opinion of certain tracks based upon their context within the games. For me, though, this album is sort of like a boxset produced by game companies. An extreme example of such boxsets is demonstrated in Square Enix recent release of a "SaGa" series 20 disc set that contains every track from every game in the series. The problem with huge releases like the SaGa offering, or with this fou disc Tales remake, is that the massive number of tracks causes even good ones to become lost in the mix. The producers must have forseen this possibility to some extent because they bookended each disc with standout tracks like "Beyond Absentminded", a remake that adds vocals to a solid base melody. Unfortunately, however, I still think the listener will begin to tune out in the second or third disc because this collection simply contains too many tracks.

Live performances like "Beyond Absentminded" clearly outshine the sequenced tracks. Some of the sequenced works, like "Riddles in the Dark" are too repetitive and fail to develop. "Diety" is also repetitive and too long, even for a techno piece. Other sequenced offerings like "Dream Traveler" fail because they are lacking in sample quality — in the case of "Dream Traveler," the background sounds like a standard MIDI instrument set to its default configuration. These pieces have good melodies but could have been improved with more attention to their samples.

Artists took chances with some of the tracks here, and they generally pay off. I particularly enjoyed "As Time Goes On", a jazz vocal chillout track that makes a few nods to Enigma or Paul Schwartz. Similarly, "Smile and Forgive" blends the original with an arrangement resembling Pachabel's Canon. The fusion might have been unintentional, given that the Canon is perhaps the most remixed melody of all time, but astute listeners may notice that the track sounds appropriate for a graduation ceremony where the Canon is often played. Another out-of-the-box track is "Fall of Iselia", the author of which may have been influenced by the Xbox 360 game Eternal Sonata, similarly by Motoi Sakuraba, with its detailed piano arrangement. These tracks demonstrate that it's possible to succeed at transforming video game music into alternate genres when remixers don't go overboard and lose the original theme in the process.

Speaking of genres, this album has it all. There's jazz, rock, classical, metal, orchestral, and almost everything else. The album is dominated by the best-selling instrument in the world, the guitar, as we've come to expect from the fan arrangement community. Some of the hardest hitting heavy metal tracks like "Simplified Design" and "Like a Glint" prominently feature live guitars. Some other live instruments, like the saxophone, flute, and piano are all represented, but there are only a few string performances. This album is very well-rounded and you'll probably find something to like unless you're a diehard fan of rap and hip-hop.

If you're too busy or don't have enough bandwidth to download the entire album, it is possible to download individual tracks from the project's website. One song that's worth downloading separately is the penultimate track, "Holy Judgement". This 12-minute medley expertly expands upon themes from Tales of Symphonia, switching between tempos, keys, genres, and instrumentation. Vocals are even thrown in. If the album were a book, this track would be its one-page summary.

While Summoning of Spirits has a lot of great musical ideas, it lacks in production. What bothered me the most about this entire album was not any single bad track, because I don't think there are any really awful tracks here. Instead, poor volume normalization forced me to constantly double-click on the taskbar sound icon and move the slider up and down. I wasn't able to simply work and listen at the same time because one remix would pound the ears, and the next was barely audible. A prominent example of this error is found in the transition between tracks 6 and 7 on Disc Two. For people like me with no volume control on their headphones, this omission is annoying you'll rarely find any professional albums that have such problems. Even free software like Audacity can significantly improve this problem rather easily. The dynamic range across the tracks is also not uniform, such that some tracks sound much "flatter" than other tracks which have distinct quiet and loud points.

When will OverClocked ReMix finally realize that producing an album is about more than simply grouping together as much music as possible and zipping up an enormous torrent of everything? I exaggerate somewhatt, but there are definitely issues. A recent look at the site's judges' decision forum reveals an acceptance rate as low as 5%, and it puzzles me that a community that prides itself upon strict quality assurance releases albums with so many tracks that don't fit well together as a whole. Those who pay attention to the community will notice that not all of the remixes that are included on this album are part of the site's official collection. There's certainly enough room for omission here — why isn't every single track on this album eligible for posting? And while it's understandable that pulling together a large number of contributors and creating a cohesive feel is difficult, ignoring the basics like making the volume consistent is not.

The most obvious example here is that there are two games listed as influences for this album. The creators avoided the most obvious decision &151; to release two albums, taking care to ensure that each game's music has a distinct atmosphere, to improve production, and to limit each album's length. In spite of some valiant efforts by the arrangers, Summoning of Spirits can't achieve greatness because its production and initial design decisions fall short.

1.06 Chronometrical (The Steam of Time)
Arrangment: The Joker

4.13 Summoning of Spirits (Fighting of the Spirit)
Arrangement: Rexy

5.02 Standing Up (To Be Fearless) [Bonus Track]
Arrangement: The Joker