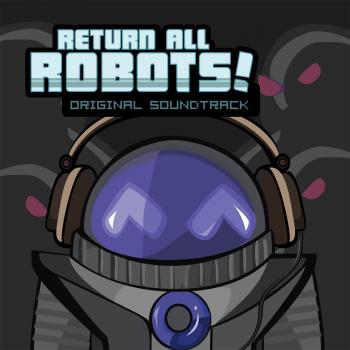 Return All Robots! is the first game to be released by Space Whale Studios, an independent game shop based in Philadelphia with some promising young talent behind it. OverClocked ReMix's own Andrew Aversa (aka zircon) is one such member serving as their lead audio composer for this project and his presence has helped create a fair bit of buzz around Return All Robots! The soundtrack is an ambitious offering of chiptune, electronica, synthpop, 80's cheese, and enough plastic sounds to make the Blue Man Group jealous.

The physical album (which includes 2 bonus remixes) can be purchased on CD Baby and a digital version (offering 6 OCR remixes) is available for download from Amazon/iTunes/etc for about $10.00. Finally, the soundtrack can be downloaded for free courtesy of OverClocked ReMix and comes with a generous 14 OCR remixes as a companion album. I opted for the free option for the sake of the remixes, and will be focusing my review on this selection. Ultimately, each release option offers different exclusives, so a bit of research may be required to find out which is right for you.

Return All Robots! is marketed as an old-school puzzler (their words, not mine!) which will remind players of classic titles like Chip's Challenge or Lemmings. The soundtrack for Return All Robots! can be described as a modern take on the oft-looped chiptune MIDI scores that would accompany its puzzle predecessors, but it is far more than that. It's something you would hear if you were playing Bomberman in a dance club. It's a jazz maelstrom of 80's nestolgia with modern production. It's a rare treasure of modern electronic composition and it's awesome.

The "Main Theme of Return All Robots!" establishes the tone for the album perfectly with its meandering, electronic jazz style of plastic pipe sounds layered over keyboards, auxiliary percussion and vibraphones. Although the instrument lineup changes between tracks, the feel of each piece and unifying elements (normally, auxiliary percussion and plastic sounds) help tie them all together. "Lobby Bossa" introduces the first of the dance backbeats which really shine in "Doctor Von Groove". The latter of the two may have a bit too much of a techno feel for some videogame music fans but is still better than a fair bit of what you'd hear in a club these days.

For the puzzle element, "Crymorph", "Deep Freeze", "Looks Like Trouble" and "Prelude to Danger" are lower-energy, slightly repetitious offerings with the latter serving as a perfect electronica answer to Tomohito Nishiura's famous "Puzzles" from Professor Layton. "Roboballad" would seem to settle into this grouping of tracks as well but is a bit too high-concept (think an updated jazz cover of Sonic the Hedgehog 2) to fit in with the rest.

"Fantastic Robotique" is by far the most ambitious track on the album consisting of a fully synthesized jazz jam mixed with soft, piano-driven new age passages that combine to form a high-energy piece. When the synthesized clapping, walking bassline, brushed snare drums, and bass runs take off in the jazz portion of this track, it really sings. There may be a lot of "80's cheese" (again, their words!) on this album, such as the shamelessly named "Training Montage", but "Fantastic Robotique" reminds the listener that this not his father's chiptune music.

On the remix front, "Deep Freeze" is the most popular, being represented by 6 of the 14 remixes. Nutritious's "You mean, I can Dodge Robots?" will delight fans of Paul Oakenfold with its distortion effects and, thanks to some fancy sampling, will also appeal to fans of Laurence Fishburne as well. O. Keitel's "Cryogenic Dubstep" take on "Deep Freeze" will give your system's lower register a workout and is a great sampling of grinding sub-bass, clipped vocal samples and everything else that makes dubstep great.

"Training Montage" also sees popularity among the remixers, being represented with four tracks) WillRock's "WillRocky" drives the already irreverent track into the realm of Over The Top 1980's Sylvester Stallone cheese whileHeaT Flare's "Do That Thing" brings "Training Montage" into the realm of surreal house music and feels perfectly in sync with zircon's work on the rest of the album proper.

Xenon Odyssey's "Oily Robot Lovin'" bears special mention for it hilarious, flattening of zircon's crafty and innovative "Main Theme of Return All Robots!" and is meta to the point of post modern ridiculousness: zircon writes a soundtrack for an 80s inspired puzzler which draws on, but never degrades into, the beeps and chirps of chiptune music only to have Xenon Odyssey take the finished product and transform it into something you'd expect to hear blaring out of a circa 1992 Gateway Desktop's integrated audio card. It's crowd accelerated innovation at its finest and everything you'd come to expect from OverClocked ReMix.

With many major label games having recursive soundtracks that play like a Latin 101 course layered over a James Horner B-side, it's inspiring to hear a creative force like zircon defend the virtues of pure electronic composition where the talent, and not the budget, dictates the quality of the music.

Some of the tracks on Return All Robots! are slightly repetitious, and the unifying elements between them can make the individual tracks difficult to distinguish. Much of this comes as a result of the genre for which the soundtrack was written (puzzler rarely afford the scope of encounters that other genres of games do), and should not reflect poorly on the album as a whole.

While Return All Robots! may not be for every fan of video game music, just as the game will likely not appeal to every gamer, it's well worth listening to if only to hear the depth and variance that a hand like zircon's can give to a synthesized soundtrack. This is definitely some of the more progressive music being composed for video games, and you don't risk anything by downloading it from OverClocked ReMix, so take a chance and see what the indie world of video game soundtracks has to offer.

Return All Robots! is the debut game from Philadelphia-based developer, Space Whale Studios, released on Xbox LIVE Indie Games and Windows in December 2010. Inspired by classics like Lemmings and Bomberman with modern twists and addictive depth, this action-puzzler will fill you with nostalgia you never knew you had.

Our lead audio composer Andrew Aversa (zircon) brewed up over 45 minutes of sweet jams for the Return All Robots! soundtrack, which includes infectious electro-pop, 80s cheese, drum machines, plastic sounds, retro melodies and dance beats. On top of that, we orchestrated a contest on OverClocked ReMix where we received a ton of groovy arrangements and remixes of the OST from the talented musicians over there. Needless to say, we want you to check this out.