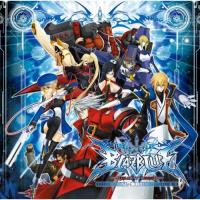 Ever since I first heard Daisuke Ishiwatari's music in the Guilty Gear series, I've had a love-hate relationship with him. I love him because his music is absolutely fantastic, and I hate him because he hasn't made music in any other series. That is until BlazBlue: Calamity Trigger, even though it is made by the same staff as the Guilty Gear series. Nevertheless, ever since I first heard Ishiwatari's music, I've been absolutely in love with his work. Because of that, I go into this review with high hopes that this album will be just as amazing as many of his other works.

We start this album with "Calamity Trigger" which starts off subtle with a slow, beautiful harmony of violins. Then, the action begins. The violins begin to speed up while the electric guitar takes center stage. This is why I love Ishiwatari; his music is a fantastic blend of classical and rock elements — a blend that I have come to love a great deal. So this track starts the album off very well. It seems to be the perfect introduction saying, "Hi, my name is BlazBlue. Are you ready to rock!?" So let's get this rockin' party started with "Rebellion". Alright, I have to admit I'm not the biggest fan of the melody. I mean, it is a great piece as usual, but it just doesn't leave me as awe-struck as some of the other works. However, without ever even playing the game, I can tell that this track fits very well in context.

"Lust Sin" is another reason I love this composer. It makes it so intensity meets beauty. The melody is spectacular while the electric guitar and beat keeps the listener excited all throughout the track. "Bullet Dance" is an interesting one, indeed. In the beginning it seems somewhat normal, but then the violins are really what take spotlight of this piece. Something about the rapidity of violins has always left me in amazement. Once the electric guitar takes the stage again, it sounds somewhat strange to me. I'm not quite sure why I think that, but every other part is a spectacular. "Motor Head" takes a much different approach in the beginning, with a somewhat jazzy acoustic style, mixed with the same rock elements. It's a bit different than most of the other tracks, but it's that uniqueness that makes me like it.

Now, "Catus Carnival" is unlike any other track on this entire album. I'm not sure where it fits in the game, but this piece just fills the listener with happiness. It gives one a break from all the intensity of the previous tracks and seems to say, "Take a load off! Have some fun! Let me buy you a drink!" And it sounds just like its title implies — a carnival, though for some reason I imagine a bar where there's a gleeful show going on and everyone's having a great time. It almost seems like the next track was placed just so that it gets you back on your feet from the break. "Queen of Rose" starts off slow and pretty, then starts with rock fest back up with a beautiful blend of electric guitar and violin. This is easily one of my favorite tracks on this album, because, again, the blend of intensity and beauty, and the addition of harpsichord to the show. Not to mention that the guitar solo that starts around the 1:30 mark is absolutely epic.

"Thin Red Line" sounds like a theme for a very powerful character, a smug brawler perhaps, because it begins to sound like... a sinister-jazz piece starting at the 0:37 mark. The beat of this song is absolutely phenomenal, though, as it got my head banging right from the start. It's another gem in what so far seems to be a treasure trove of an album. The electric guitar is remarkable, and the occasional jazz piano just makes things even better. We move onto "Gale". This one is rapid right from the start and keeps going until the end of the piece. I like this one because it still has our good ol' rock in there, but with a very joyful melody to it. This brings us to "Oriental Flower" which at first sounds just like its title, with a very oriental string instrument. At first it starts off very normal sounding, but then it gets very interesting when the electric guitar and that string instrument come together.

"Marionette Purple" starts off with very jazzy piano. Of course, our good friend the electric guitar comes in to give it some more intensity, but I think that this piece probably could have just as well without it. The violin and rock organ give it a great melody. Now that I think about it, though, the electric guitar still adds to this piece. About two-thirds the way through, the jazz becomes even stronger, quieting down a little bit. So anyway, this track is another one that is very unique from the rest, so it's quite good. Right in the beginning of "The Road to Hope" I began smiling because I love organ solos like what is given in the beginning. Again, it's another rock piece and it has that cheerful melody like "Gale". However, I think the happiness is a bit more so. Its title definitely does illustrate what the piece is like.

Alright, now it's time for Disc Two. In the beginning we have "Heaven Destruction", which reminds me quite a bit of "Calamity Trigger". It starts out with the subtlety, and then starts to rock your face off again. A cascade of violins helps in the background to make this piece flourish. The only complaint I have about this one is that it does get kind of repetitive, but it's not annoying in the least bit. The melody is great so I almost don't even mind its repetitiveness. "Imperial Code" starts off very orchestral, almost like a fast-paced battle march with thousands of soldiers. After about a minute, the battle begins, and then it's just an epic war from there. I like this piece especially because it put that image into my head. I've always thought that pieces that do that have much character to them. Having this happen to me makes it more memorable. It has a choral taste to it in some parts that makes you tingle, so this one is incredible.

"White Requiem" is most definitely my favorite track on this entire album. The electric guitar steps back so that the extraordinary melody of the organ and harpsichord could have their chance in the spotlight. The moment where the organ, harpsichord, and violin were playing together as one simply makes my heart melt. The rock element is still there, but this time the classical element has been given a chance to make this piece absolutely magnificent. "Awakening the Chaos" is very choral in the beginning, and I must say that it is a great sounding group of vocalists. Then the electric guitar rises to fame once again, giving a very epic melody. But what I didn't expect was that the choir would be the ones to take the leading role, and they definitely don't disappoint. I can say I've never heard a choir and an electric guitar go together so greatly. And then towards the end everything starts to slow down, and the track goes from epic to beautiful. This track is an extremely memorable one, without a doubt.

I have to admit that "Weak Executioner" sounds a little too normal for my tastes. I mean, the melody is quirky and fun, and the beat is great, but something about this theme just doesn't leave me as impressed as all the others before. This doesn't mean it's not a good piece, because it is. It just hasn't caught my attention as much as the others. I would make a comment on the fact that its name fits, but I don't dislike it that much. This goes for "Susanoo" somewhat, too. Although the mix of the electric guitar and an oriental instrument is very unique and goes together like peanut butter and jelly, I'm just more fond of a the rock/classical mix Ishiwatari's given so far. Even though it doesn't matter too much, as it's only 45 seconds long but I want to say something about "Open the Gate". It sounds like it'd be very fitting to where I imagine it goes to in the game. A dark sky, a menacing gate, and the group of protagonists standing before it as it opens to a temple most dank. So it fits, but the problem is that a lot of it sounds more like a buzzing noise.

Alright, we move onto "Black Onslaught", and I have one thing to say: "MOSH!" This album has gone from rock to a scream metal concert. So because of that, this is the one track on this album that I cannot stand. And what sucks about it is that it starts out so great, and then this scary guy starts yelling in his growling voice. If you're one that likes scream metal, then this track is perfect for you. Believe me, I know many people who would think this track was the best one on this album, but it's just not my cup of tea. So, this track is good because of its extremely rapid beat and guitar solos, but the screaming vocalist screws it all up. We move back to our rock fest with "Blood Pain" which, even though I'd think it sounds very normal, has a very memorable melody to it for some reason. I think I see where this theme and "Black Onslaught" fit together. Story wise, it would sound like "Black Onslaught" is a time where the protagonists are getting beaten badly by the villain, but then "Blood Pain" is the part where their confidence builds up and then the tables turn. One thing about this track, though, is that even though it's just as long as the others, it seemed to go by very quickly. There's nothing wrong with that, though

The struggle is finally over, as is our rock fest. We wrap this album up with "Limited Again" and "Nocturne" two very beautiful pieces where the electric guitar doesn't even show up. "Limited Again" allows the listener to rest from the chaos with a charming violin and piano piece. The choir comes in halfway and makes it even lovelier. A sense of intensity is added towards the end, but the beauty doesn't detract at all. "Nocturne" is another quiet, somber piece that sounds a little darker than its former. Its intensity is a little greater as well, but both are very relaxing. Ah, but it's not over yet. Here we have our finale, "Blue Beating". The rock and beat give this piece a slight sense of intensity, but the harpsichord does an even better job at it, and the violin is the icing on the cake. It does get slightly repetitive, and isn't the most impressive, but it's still a good one.

Album was composed by Дайсукэ Исиватари / KOTOKO and was released on December 24, 2008. Soundtrack consists of 29 tracks tracks with duration over more than hour. Album was released by Team Entertainment.

Sounds like Metal, Rock - that's what we can say about this album.