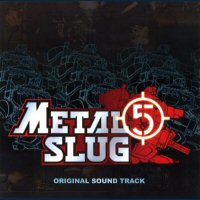 Metal Slug 5 was the second game of the series that was created after the decline of the old SNK. Unlike the previous attempt, it fares surprisingly better, with some cool new additions and a few original ideas while improving on most lacking aspects of its predecessor. Fortunately, the same applies to the music. While Metal Slug 4 had a fantastic orchestral hybrid soundtrack, it kind of lacked on the "Rocking so hard until your face melts off" department. Toshikazu Tanaka returns once again to compose and perform, as he is ready to make up for that past mistake. Turns out that he overdid it. The final result is an energetic and catchy soundtrack that is highly effective in context, and at the same time, a memorable stand-alone listen. It was published in two versions. The first one was published by Noise Factory in 2004 and features superb audio quality. The second is included in the Metal Slug Complete Sound Box and unfortunately is inferior in quality.

Most of the compositions have the same structure and instrumentation: Electric and bass guitars, drums, keyboards, synthesizers, and mostly everything that sounds like Heavy Metal. This is all typical Tanaka fare, but what makes special each piece of this 16-track score is the energy and complexity that he embeds into the simplicity of his style. While on first listen, it's easy to judge the tracks as superficial, each theme becomes immediately memorable in-game, due to the frantic action and over-the-top style of the Metal Slug franchise. The more you listen to the music, the more addictive it becomes, because of Tanaka's ability to create catchy melodies and complement them with superb instrumentation. Also, despite all tracks falling into the same genre — which in many ways is a big plus, since it creates consistency and cohesiveness — each composition is full of personality and manages to sound unique in their own way.

To be more concrete, "Heavy African" and "Ruins Excavation" are two hard rock tracks that mix ethnic elements, and both represent the first jungle-based mission. The former is an eccentric mix of distorted electric guitars and exotic synth melodies, along with wild-life sounds. There is even some ethnic African chanting immediately after a burning guitar solo. The latter has a slower pace and creates some ambience, but still features heavy guitars, echoing piano notes, tribal percussion, Middle-Eastern motifs, and even cheesy "mystical" female chants. All this just in the first mission!

"Run Through" is a fun and cheesy rock theme. It gathers pace with techno beats, trippy sound effects, and some funky trumpet melodies followed by the eccentric guitar solos. On the other hand, "Bottom of the Sea" is a more intense theme, featuring synthetic melodies but without disregarding the now-familiar electric guitars, fitting very well for the underwater action in the game. Without a doubt, the most unique composition of the soundtrack is the incredible spaghetti western-influenced "Windy Day". This is truly one of the best of its genre that I have heard, full of echoing whistling, memorable trumpet solos, and beautiful acoustic guitars. It's definitely one of the major highlights of the soundtrack.

Still, Metal Slug is, at its core, all about rocking hard, and this album does that tremendously well. Tanaka's electric guitar skills impressive in "Zoom Down" and "Intrigue". In fact, it wouldn't be an exaggeration to say that both of them are two of the best rock anthems in game music, rivaling even Guilty Gear (and that's quite a big compliment). Boasting catchy melodies, blazing electric guitars, and some extravagant solos, these themes manage to make the adrenaline rush and increase the heart rate to dangerous levels. Each one is very unique: "Zoom Down" features some keyboard layers and female vocal samples that prelude the out-of-this world guitar solo that sounds like you are descending into the most awesome depths of hell, where some extreme action is going to take place. On the other hand, "Intrigue" starts with blasting energetic solos and features heroic trumpet melodies. Both are intense musical ramps that will stick in your head for a long time.

Furthermore, Tanaka is not afraid to demonstrate his progressive approach to music. "Speeder" is the best example for this. Fusing energetic and fast electric guitars, electronic sound effects, cheesy but epic synth melodies, along with some exquisite trumpet solos, this over-the-top theme inspires urgency, action, and most importantly is tremendously fun to listen. Also, the Middle-Eastern motifs make a comeback in "Fierce Battle", which is heard in boss fights. The theme is a raging beast on a full-on rampage to destroy everything. The intense guitar work and aggressive motifs make this one of the best boss tracks in any video game. Clearly, Tanaka is capable of creating some really cool and interesting experimental rock compositions.

As for classic Metal Slug themes, there are very few, and they get a special treatment. The minimalistic "Military System", memorable jingle "Carry Out", and the epic "Final Attack" all get a hard rock makeover, full of heavy bass and fantastic guitars. The most notable is of course "Final Attack", which is a heroic and epic anthem for the final showdowns of the franchise, made even more effective and raw by Tanaka's instrumentation.

Ultimately, the Metal Slug 5 soundtrack is highly effective in context, and at the same time, incredibly enjoyable as a stand-alone listen, due to the fantastic performance, catchy melodies, and rich and complex developments that Toshikazu Tanaka implements in his compositions. The soundtrack manages to be full of personality and energy, and sounds varied and never tiring, despite mostly everything falls into the same musical genre. Overall, it's one of the best Metal Slug soundtracks that manages to raise the bar for the series, while still keeping the same spirit. If you are interested only about Metal Slug 5's music, I highly recommend purchasing the stand-alone edition with its superior sound quality, though the box set is still worthwhile for hardcore fanatics of the series.

Album was composed by Тосикадзу Танака and was released on March 12, 2004. Soundtrack consists of tracks with duration over about 35 minutes. Album was released by Noise Factory.

Sounds like Metal - that's what we can say about this album.