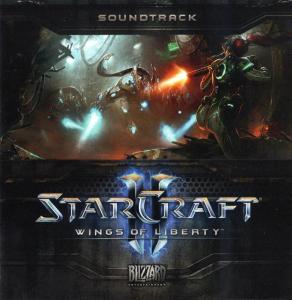 12 years — that's how long it took for StarCraft to finally get a sequel. And finally here we are, with StarCraft II: Wings of Liberty, and it was worth that 12-year wait. A brilliant game, it did everything a sequel should do — taking everything that made the original so good, improving on it, adding some cool new elements, focusing on what people liked best about the original. The multiplayer through battle.net is easy to use and lives up to expectations and the single player story has had a lot of effort put into it, creating a story that's engaging, believable, and really entertaining. Whether this game becomes an official sport in South Korea is yet to be seen, but either way it is a masterpiece.

In no small part thanks to the improved storytelling, the music of this game is an improvement over the original StarCraft. Both Derek Duke and Glenn Stafford return from the original game along with Blizzard's new sound director Russell Brower, replacing Jason Hayes. All the main themes from the original game are intact, but this time round they sound so much better, because the music has been given the full orchestral, choir, and real live instrument treatment that this music deserves, and it sounds spectacular. A few synthesiser sounds are used as well, but they complement the epic sound of the orchestra and choir really well, as do the rock and Western styled guitars and percussion.

The soundtrack opens with the game's title track "Wings of Liberty", which is a brilliant orchestration and arrangement of several of the main themes from StarCraft and a fantastic opening to the soundtrack. This piece goes through so many different moods and emotions, and easily holds the listener's attention throughout. After the piece introduces us to the new orchestral sound for this game, the composition transitions into the well-known opening from the original game, which sounds awesome with live instruments. After that, instead of going into techno mode as in the original game, Russell Brower offers a beautifully written Williams-esque brass section that builds into a battle theme which fans of the original will recognise as "The Death of the Overmind". Subsequent sections place the focus on solo performances for soprano voice and piano, before ending with a romantic strings section reminiscent of "Dearest Helena" from the original and a recapitulation of the fanfare. This piece is one of the best opening themes for a video game that I've ever heard; it has elements of other sci-fi epics like Star Wars, Halo, and Doctor Who, which combine to make an immensely satisfying piece of music.

"Public Enemy" takes a completely different approach. Here we get an atmospheric piece mostly on the guitar. It starts of as Western underscoring, with a nylon string guitar, orchestral undertones and even some harmonica. This then develops into what sounds like the beginning of a progressive rock song, which then becomes a classically styled guitar piece. This piece provides for a nice contrast to what we heard before. Also something very different, I like to think of "Heaven's Devils" as a progressive rock instrumental (which is stylistically similar to the Terran themes found in the original), though perhaps with more metric order. There are some nice violin and brass solos in this piece but for the most part the orchestra takes a back seat role for this piece. It starts off with a fast section that slows down about a third of a way into the piece, we get some electronic atmosphere before going into a section that reminds me in many ways of progressive rock band Porcupine Tree. This piece also has elements of Pink Floyd, Yes, and even Led Zeppelin.

Contemporary elements are also featured in "The Deal" by electro-orchestral duo Sascha Dikiciyan and Cris Velasco. This is a tension building track, starting off with some quiet electronic percussion, before introducing orchestral elements. It is somewhat reminiscent of Hans Zimmer's music with its blend of strings and electronic sounds, though with a degree of individuality as well. "The Hive" is a mostly an electronic piece, which is another throwback to StarCraft. It takes a while to develop but it features a really interesting soundscape and progresses well. "The Prophecy" is also a very dark, moody piece that goes through various stages, transitioning between creepy calmness and full-blown intensity. The choral writing here is fantastic, and in parts the female singers remind me of Neptune from The Planets suite. "Firstborn" starts off very similar but then progresses to become a slow electronic piece, which in many ways is a throwback to the original game. This piece is atmospheric underscoring, but even then it is at least an interesting listen.

One of the more ambient compositions is "I, Mengsk". While it starts off as familiarly styled action music, a radio crackle yields an opera section reminiscent of the Three Tenors, which is a really nice surprise (fans will recognise this as the aria from Starcraft: Brood War). The remainder of the piece is cinematic underscoring, which has some interesting nuances, particularly through the brass calls. Some people may find the atmospheric underscoring in this piece and others too repetitive for their tastes. However, those who stick with it in the right mood will find it a very worthwhile and fulfilling stand-alone listen. "Better Tomorrow" is a more sombre track, which makes really good use of the flugelhorn and trumpet as solo instruments at the beginning. At the end we've also got a really beautiful choir section. This track wouldn't be out of place at a funeral, which may be a bit too depressing for some people, but nevertheless gave me the chills.

"Fire and Fury" starts off with the choral music that sounds like a movement from Faure's Requiem. It proceeds into a very triumphant sounding piece, before descending back into dark atmosphere mode. This then proceeds into a section which sounds like a call to arms, as if to say "this is it men, the final battle is upon us". This is very appropriate as the next track, "The Showdown", is the final track. This track incorporates elements of all of the music heard before it; it starts off with some of the dark atmosphere, with some of the Western guitars and harmonica as well. It then proceeds into a section that reminds me of the final moments of Lord of the Rings. After this, there is a reprise of the epic fanfare heard at the beginning of the soundtrack, which closes the closes, the soundtrack brilliantly.

Starcraft II: Wing of Liberty's soundtrack impressed me no end. The variety in this soundtrack is amazing and, while it may be inspired by a lot of already existing film and game scores, it implements all of these elements really well to create an immensely satisfying soundtrack. It's very unpredictable and each piece goes through so many different sections and stages that they are amazing to listen to. Furthermore the music is a noticable improvement over the original game's soundtrack, mostly thanks to the live orchestra and choir. In addition, all the music complements the game really well, even if it will not appeal to certain game music listeners out of context. However, if you're looking for some really top quality and varied cinematic scoring, StarCraft II's soundtrack has you covered. I can't wait to see what music Blizzard's team comes up with for the Zerg (Heart of the Swarm) and Protoss (Legacy of the Void) campaigns.

StarCraft II - Ghosts of the Past Trailer

Sounds like Ambient, Classical, Electronica, Folk, Rock - that's what we can say about this album. 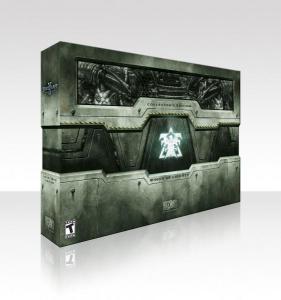