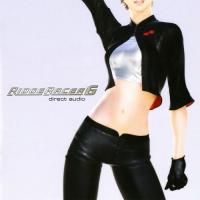 I wrote a haiku about Ridge Racer 6's soundtrack, and it goes a little something like this:

It's funny how much you can say so much in so few words, and as much as I'd love to just print those three lines, slap on a high numerical grade and my personal stamp of approval and move on, I owe both you, the readers, and the composers behind this awesome double-disc electronica set more than that sweet little haiku. The best part is that this album's release was a shocker: somehow Supersweep picked up the rights to the music and published the full soundtrack to Ridge Racer 6 more than three years after the game's release. One day I'm checking out music from the game rip and the next I'm holding one of the series' best soundtracks in my hands. Go figure.

I am a huge fan of the Namco mash-up that's represented on this disc. Akin to other semi-recent releases like Ridge Racers Direct Audio and the Ridge Racer 7 soundtrack (side note: the latter should be avoided like a lit stick of dynamite that loops incessantly for seven minutes straight), there's an excellent blend of older SamplingMasters style techno jams and more modern Namco electronica, courtesy of the SuperSweep team and Namco's current sound team, respectively, even if the line gets blurred several times throughout the disc. I checked the tracklisting when I was listening to Hiroshi Okubo's "Drift Psychosis" and was floored; I could have sworn I was listening to one of Shinji Hosoe's mid-90's Ridge Racer remix tracks. Consider it an homage to the series' musical roots. The combination of the two pseudo-styles is smooth throughout both discs and, while the set leans toward the more modern style of Namco's electronica, it's still very well balanced and neither disc has any real breaks in the flow despite the variety of music.

The aforementioned Okubo's menu music, "Find Your Way", hints at his Ridge Racers Direct Audio composition "Departure Lounge", but keeps things interesting with the inclusion of slick bass licks and sporadic and smooth female vocal samples throughout. The breakdown around the four minute mark is, put simply, to die for. As sound director, Okubo has the most tracks on the disc, including the surprisingly tolerable ending vocal "Chasing All My Dreams", but his best is "Explorers"; mildly reminiscent of his "RockStars" entry from Nanosweep 4, "Explorers" features some cut-up female vocal samples, electric guitar and off-kilter beats that keep the song exciting during its duration. While Okubo is credited with the most tracks, a good number of Namco composers only have one song on the album, leaving a well-rounded and diverse yet equally unified experience while the disc is spinning.

Luckily, Rio Hamamoto is one of the composers that has only has one track, "Road Mauler", which is basically a five minute version of his lackluster "Stalking Wolves" track from Tekken Dark Resurrection sans wolf howling samples. Also luckily, this is the only real stinker on the disc, leaving room for other team members to shine; it's just a shame that Hamamoto gets five minutes of playtime while Keiki Kobayashi only gets fifty-four seconds. Oh, pity. Katamari Damacy heavyweight Asuka Sakai brings the wacky electronica with "Sueno Del Mar", yet it's strangely grounded by jazzy electric piano licks and solid female scat vocals while Yu Miyake stays true to himself and keeps the funk alive with his low-fi "Acid Eutron #001", complete with warbly synth sounds and vocoded vocals. Chalk up another win for U. Koji Nakagawa's "Photon Field" is appropriately energetic and drops the synth layers heavily while Tetsukazu Nakanishi's "Ultra Cruise" brings back some memories of his work on Ace Combat 3, complete with airy synth melodies and driving basslines over a light techno beat. And, true to form, Junichi Nakatsuru brings back the orchestral and jazz fusion with "Layover", arguably the best Ridge Racer ending theme yet.

It's no secret that the original Supersweep team, masterminded by Shinji Hosoe and supported by first lady Ayako Saso and electronic prodigy Noboyoshi Sano, pioneered the music for the Ridge Racer series, and all three of them are back in full force for the RR6 album release. Even Takayuki Aihara, first featured on the Ridge Racer 2 album, is in attendance with his pleasantly scatterbrained and slightly Latin-influenced "Trail of Light". There's no question that tracks like Hosoe's dark techno in "Valley of the Mind" and Saso's raving "Nitro Mantra" are influenced by their own previous work in the series. Saso's tracks are back to back, with the fast beats of "Nitro Mantra" leading into the sexy techno of "I Want You" that wouldn't sound out of place on any of the Nanosweep discs. Hosoe's second entry, "Highway Fusion", channels the funky rock of "Combustion" from Ridge Racer 7 but puts it on a much better soundtrack. Oooh, sick burn! Sano's "Floodlight" is a solid track hearkens back to some of the lighter techno tracks of his compositional past. And if you're feeling so inclined, take some funky synth and off-beat hand claps, then roll them into a high energy beat that could only come from Sanodg and you have "Radiance", one of the album's many (many, many) highlights.

It wouldn't be a Ridge Racer soundtrack proper without a remix or two of old Namco tunes, and the ones on Ridge Racer 6 are two of the best yet, for sure. Kota Takahashi reprises his own "Synthetic Life" from the Ridge Racers Direct Audio soundtrack but incorporates plenty of synth sounds, original melodies, and sound effects from Galaga and decided to call it "Galactic Life". Perfectly fitting, of course. And, last but surely not least, Akitaka Tohyama brings the hard techno with his "Run Pac-Man Run", arguably the most energetic and listenable version of the original Pac-Man theme. He layers the original melody over a fast and driving beat and, dare I say it, rocks the hell out of the thirty year old theme like nobody else has before. While Okubo's rendition in the form of "Eat'em Up!" from Ridge Racer Type 4 was enjoyable and novel at best, "Run Pac-Man Run" comes out on top by a long-shot and stands as a track that I am unashamed to blast in my Toyota Camry and dance at red lights to.

So, thank you kindly, Supersweep, for one of the best releases of 2009 thus far and for the most consistently rockin' and thumpin' Ridge Racer album yet. I'm keeping my fingers crossed and can only hope that the acclaimed music from R: Racing Evolution has an eventual album release. Seeing how the series' soundtrack release timeline is starting to look like the fifth season of Lost I wouldn't be too surprised if it happened in the future. But, for now, Ridge Racer 6 will keep me as happy as can be. I wholly recommend this release for both long-time fans of Ridge Racer music as well as relative newcomers who are interested in checking out what the series has to offer. Might as well start near the top. For lack of better words: Supersweep again... and Namco's sound team rockin' out? Hmm. Yeah, listen to this now. 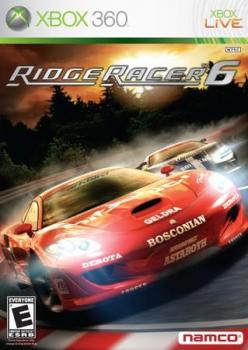