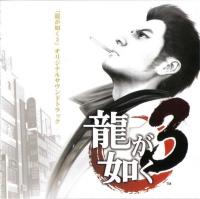 In 2009, the Yakuza series returned with its third main instalment. Having developed the series' music on the historical spinoff Ryu ga Gotoku Kenzan, Hidenori Shoji looked to continue this development back in a contemporary setting for Yakuza 3 (aka Ryu ga Gotoku 3). The resultant score restores the rock focus of the series, but is generally less abrasive and more diverse. Though Shoji once again leads the score, he is assisted by several others, most significantly Hiroyoshi Kato. Let's take a closer look at the resulting one disc soundtrack release, available both commercially in Japan and with the collector's edition of the game in Europe...

The soundtrack opens strongly with "Fly", essentially a much-elaborated and much-softer instrumental version of "Receive Me". Hidenori Shoji places the focus on lush interplay between an electric guitar and steel-stringed acoustic, both of which provide memorable and emotional interpretations of the melody. Nevertheless, he fleshes the composition out over the five minute with soft electronic beats, soft string and piano support, and of course, a little rhythm guitar. Another definitive highlight is "Lyricism Without Tears". While it starts off with cookie-cutter hard rock riffs, it soon makes listeners glide with its acoustic guitar lead from 1:05. The guitarist offers a beautiful performance and makes the very most of the finely shaped melody. Surprisingly, there are few actual vocal themes here though — the theme song "Loser" reserved for a separate single. That leaves just gimmicky compositions like the disco parody "Let's Make the No. 1 Hostess!", the hyperactive girly anthem "Kitto Change Myself", and anime parody "Kamuro Setsugekka" in the vocal department. They serve their in-game purposes, but don't stand up against previous vocal themes in the series as stand-alone listens.

Delving deeper into the soundtrack, it's clear that Shoji has learned the art of restraint when creating atmospheric compositions. He makes clear that he intends to maintain the softer approach of the opening theme with his surprisingly soothing new age version of the "Roar of the Dragon". In Kentaro Koyama's "Entrance to the Chaos", there are still enough rhythmically compelling rock and electronic riffs to embellish the tense tone and urban imagery of the game. However, everything is mixed in a very soothing way and no single element ever grows overbearing. Some compositions are even quieter. In "Dead Run", for instance, some sporadic dissonant piano chords are enough to create the desired tension in the game without disturbing the gentler electronic beats. Elsewhere in the soundtrack, Takahiro Kai's "Urgency" achieves a brooding sound by blending electronic and acoustic forces, while Hiroyoshi Kato's "Encounter the Dragoon" is an increasingly motivating theme with extravagant keyboard work. Both exude so much personality without being overbearing or one-dimensional. Perhaps even better in the fusion department is Kenzan returnee "Takumi 2009" for the way it blends modern and traditional Japanese styles so elegantly.

Nevertheless, Shoji's characteristic hard rock style does return in the action compositions for the games. Pieces like "Skirmish", "Hear This in the Game", "Pure Malice", and "Receive and Stab You" are exactly what one would expect from the Yakuza series — with raw rhythm guitars, uncompassionate supporting forces, and a little improvisation along the way. They're even better produced than most of the themes from the original Yakuza style and are also likely to be more accessible to mainstream audiences too. Talking of the original Yakuza, "Independence for Violence" proves an incredible arrangement for the way it incorporates much more elaborate and stylised saxophone and guitar work and could easily have come from a live performance from a real funk band. Meanwhile "End Point" is also refreshing for the way it places charismatic trumpets and edgy celli into an otherwise electronic landscape and the result is truly rousing. Tracks like "Ryu-Kyu Humming", "Another Demiworld", and "Illtreatment" also incorporate brief rap sections. While often solid stylistically, they don't represent much of a progression from Yakuza 2 in terms of production quality; the team would benefit from outsourcing to external rappers like MadWorld did rather than sticking to tired voice samples.

Overall, Yakuza 3's soundtrack represents an evolution of the series' music. The abrasive approach of the initial scores in the series was effective, but only offered a limited number of possibilities in terms of expression and entertainment. It is therefore understandable that Hidenori Shoji eventually decided to tone things down and cater the rock tracks more for stand-alone listening. There is also a lot more diversity in this soundtrack and this makes it more entertaining as a collective whole in spite of the absence of the vocal theme. The score also works flawlessly as background music in the game, though the cinematic music is largely absent as with other releases in the series. While there is still room for improvement, the scores for the series are increasingly becoming must-listens for fans of the rock genre.

Hiroyoshi Kato's name is misspelled in the credit for track 12; the characters in his given name are reversed.