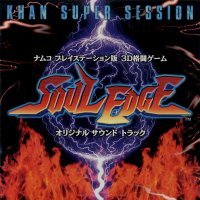 The PlayStation version of the fighting game Soul Blade (aka Soul Edge) offered three different sound versions. There was the orchestral Arcade sound version, a diverse PlayStation rearranged version, and, most memorably, a rocking new soundtrack called the Khan Super Session. As the name implies, Soul Edge PlayStation Edition Original Soundtrack - Khan Super Session features the new soundtrack to the game, composed by external game music and anime veterans such as Taku Iwasaki, Masumi Ito, and Aki Hata. It's a diverse ride, featuring rock, orchestral, funk, electronic, vocal, and world music in often very novel fusions. This soundtrack really pushed the edge back in 1996, but has it stood the test of time?

Misplaced at the start of the soundtrack, Masumi Ito's "Doubtful Judgment" is a generic stage theme. It gives a rocking edge to the album right away with orch hits pounding out the Arabian-influenced melody against rhythm guitar riffs and hard drum lines. Although it comes across superficial at first, at least there is a percussive interlude and an even more Arabian section to demonstrate the soundtrack's high production values. The multicultural influences are maintained in Cervantes' stage theme "Castaway into Darkness". Ms. Ito offers an infectious yet elegant blend of orchestral, flamenco, tribal, and rock sounds to represent the Spanish-born pirate. Although there is plenty of development throughout, probably the best moment is at the 0:59 mark when a passionate string melody enters against Spanish guitar accompaniment. Her theme for the mace-wielding Rock, "A Continental Gale", is written more in series' tradition with its crisis orchestration, though it's quite a bit more experimental with horror tinges and the occasional flashy guitar solo. Sophitia's "A Mediterranean Call" is a much mellower blend of orchestral sounds and ethereal synth, though isn't quite as melodically striking as other entries to the album.

Aki Hata brings much to the album with the other generic stage theme, "P.N.K.N." While it has some parallels to Masumi Ito's "Doubtful Judgment", it is essentially a progressive funk theme with wild keyboard improvisation, sassy brass work, and extended percussion solos. It certainly raises the bar for stand-alone listening. Hata also collaborates with Yoshiyuki Ito to bring Seung Mina's theme "Tiny Amulet" to life. There is a nice blend of Indian-styled vocals, peppy old-school rock work, and funk improvisations here. Mr. Ito also demonstrates his versatility with Mitsurugi's theme "Hagakure", blending utterly gorgeous shakuhachi infusions with upbeat electronica and rock influences. It's an amazing way for contemporary and traditional cultures from East and West to meet. Taku Iwasaki, on the other hand, is responsible for the more dramatic contributions to the soundtrack. Voldo's "Another Fanatic" is bound to give listeners the creeps with its dark and novel use of rock instrumentation. Siegfried's theme "Darkness of Fate" is the sole orchestral overture on the soundtrack; it works very well towards the end of the soundtrack with its regal influences and contrasts of light and dark. What more could you expected given it is coming from someone with Iwasaki's training?

So what about Benten Maru's (aka Khan's) contributions to the soundtrack? One of the highlights for mainstream fans will be the opening vocal theme "The Edge of Soul". Although it comes across cheesy all these years on, it was very novel accomplishment back in 1996. Khan blends Westernised female vocals with rocking guitar work, various cultural infusions, and even some sonorous fiddle countermelodies. It's undeniably catchy and the development is surprisingly rich too. Of Khan's two instrumental pieces, Taki's "A Haunting Wind" is a decent jazz fusion theme, although it stands out more as a catchy effort rather than anything musically substantially like Hata's "P.N.K.N." He also crafts Li long's "Moonlight Shadows" in a traditional Chinese style using gorgeous synth. There are interesting parallels with Mitsurugi's theme, although a Chinese rather than Japanese bamboo flute is used. The ending theme "Our Way Home" has a very different tone to it and is written more in the style of a rock ballad. A female vocalist continues to dominate the composition, particularly in the chorus with repeating wails of the lyrics 'Finding our way back home'. The instrumentation remains subdued throughout, but some Eastern-flavoured flute and violin work really enhances the mood. It's very emotional in context.

Even now, the Soul Edge PlayStation Edition Original Soundtrack - Khan Super Session stands out as a remarkable effort. Although it largely deviates from the series' traditional orchestral style, it still fits the game's characters and cinematics surprisingly well. As a stand-alone, it is impressive because of the amount of intricacy within each theme and the amount of diversity collectively. Over a dozen styles are featured in this soundtrack and they are all executed in a superficially enjoyable and musically fulfilling way. Those who enjoyed the music in the game should still try to seek out this album. Despite the weird track orders, it does the soundtrack justice.

Album was composed by Aki Hata / Bentenmaru (KHAN) / Масуми Ито / Таку Ивасаки / Ёсиюки Ито and was released on December 18, 1996. Soundtrack consists of tracks with duration over about 60 minutes. Album was released by BMG Japan Entertainment.