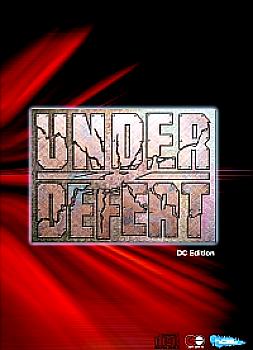 With the release of the PlayStation 3 and Xbox 360 versions of Under Defeat, Supersweep decided to re-publish Shinji Hosoe's soundtrack for the original game. However, rather than be a straight reprint of the arcade soundtrack, we have the Dreamcast version of the soundtrack. This includes live guitar in the stage themes, though the boss themes are the same as the original. Is this album worth picking up?

The first stage theme, "Can't come back," is a fantastic synth rock piece that definitely has some jazzy influences, particularly in the lead guitar melody, as the live guitar definitely adds a bit more funk to the mix. However, what I find most interesting is definitely the sections of the melody that sound as if they are played by an accordion. It's a really nice, almost soothing, contrast compared to the heavier nature of the electric guitar. The corresponding boss theme, "Death valley," is a short electronic theme with some progressive rock elements, mainly through the staccato piano and keyboard notes; however, the majority of the theme is quite chaotic and intense. Although it doesn't feature much focus on melody, it manages to capture the perfect mood.

"Towards a mistake," the second stage theme, is a synth rock theme that is more standard in approach. The electric guitar lead is quite powerful and, when in conjunction with the synth accompaniment, works to create a wonderful, dreamy soundscape. There are some sections that lack a bit of melodic focus, which I think causes the track to suffer a bit, but for the most part, it's a solid composition. The guitar solo that is added to this version is absolutely amazing and really helps give it a new dimension. The second boss theme, "Blue wall," has a very intriguing sound, combining tribal percussion, industrial synthesizer sections, ambient electronic tones, and a hint of chaos. Overall, I find it to be quite effective, particularly in terms of atmosphere.

Moving to the third stage, "Way back that was shut" is another synth rock piece that focuses on powerful guitar riffs and electric guitar and synthesizer passages. There is definitely a hint of sorrow heard in the electric guitar melody at times, and I really like the quirky sounds of the synthesizer work. The additional guitar work in this theme definitely has a bit of a gritty, grungy sound, while still incorporating that funk rock sound consistent with the other stage themes. Overall, it's another wonderful theme that manages to convey a ton of mood. "Farthest wasteland," the boss theme for this stage, is a synthesizer marvel with a bit of a drum and bass influence. I really like the B section, as it gives off both images of hope and despair. However, the A section gives off the most intense passage, coming off as really catchy, despite not really focusing much on melody.

"Storm of fine weather," the fourth stage theme, is one of my favorite stage themes. It's a wonderful synth tune that is definitely reminiscent of some of Yack's work on G.rev's predecessor Border Down. The melody is superb and I really like the atmosphere it conveys, giving it a nice futuristic, determined sound. There are definitely some jazz influences heard in the B section of the piece that helps bring a bit of contrast into the overall experience. Out of all the themes, I really enjoy the addition of guitar in this theme, since unlike the other themes, it didn't have a rock focus to start. The guitar passages really help give it a nice edgy, funky groove that really fits with the bubbly synth nature of the main tune. The fourth boss theme, "Distance of jet black," is an intense one that features some heavy industrial beats that convey a sense of impending doom. These beats are highlighted by the ambient, suspenseful synth employed. In addition, there are some more frenetic synthesizer sections which really help give off a sense of chaos.

Lastly, "Tears which died," the last stage theme, opens up with a melancholy and sorrowful piano and synth passage before moving into some heroic synth rock. It's a wonderful theme that really manages to bring a fantastic energy into the mix. While the accompaniment section does get fairly static overall, I find that the electric guitar and synth melodies really help to counteract that by being quite memorable and the core focus of the theme. I really enjoy the live guitar additions in this track as well, as they help give it a bit more of a personal touch while at the same time, adding some jazz and funk sounds to the overall theme. The final boss theme, "Huge dead end," is definitely one of the more impressive themes on the soundtrack. Unlike most such themes, which are extremely chaotic in nature, Hosoe opts for a more subdued approach, although not one without energy. I really like the smoky atmosphere that the jazzy piano adds to the mix. In addition, the ambient industrial accompaniment and the drum n' bass style beats really help make the theme coalesce into something spectacular. This is truly one of Hosoe's most successful themes to date.

In the end, I think that Hosoe's Under Defeat DC Edition Soundtracks is a fantastic ride that doesn't really falter too much. For the most part, the album is a wonderful listening experience that combines quite a few styles, some of which are rare for shmups, such as jazz. The addition of the live guitar really helps spruce up all the tracks, giving the soundtrack a bit more of an edge. Keep in mind there isn't anything new here — the stage themes are taken from the previously released Under Defeat Extended Tracks, while the boss themes are ported from the original Under Defeat Soundtracks. That said, if you don't own those, then this is definitely a soundtrack worth getting — it is the definitive version of one of Hosoe's finest solo works.

A reissue of SRIN-1026 while containing music from the DC port.


Album was composed by Синдзи Хосоэ and was released on February 23, 2012. Soundtrack consists of 15 tracks tracks with duration over . Album was released by SuperSweep. 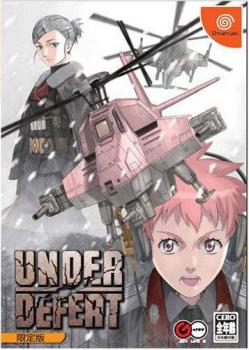