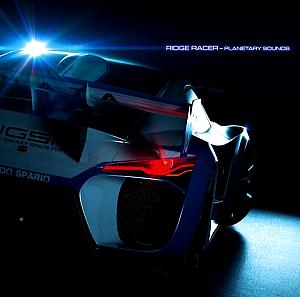 Ridge Racer Planetary Sounds is the latest soundtrack release for the Ridge Racer series. Featuring the new music found on Ridge Racer for PlayStation Vita, it combines a variety of styles from current and former members of the Namco Sound Team. How does this album turn out in comparison to some of the older soundtracks?

The album opens with "Entrance," a soothing tune by Hiroshi Okubo that definitely has that Ridge Racer sound. Similarly soothing and ambient is "Planet (Select Screen Edit)" by Taku Inoue. It's an extremely intriguing piece because it takes all elements of "Planet," the 2011 E3 trailer music which is featured at the end of the CD, and incorporates it into a less intense version. Of the two versions, I definitely prefer the select screen edit, but both are satisfying in their own right.

Of course, the majority of the soundtrack is the actual racing music. Hiroshi Okubo's "Into the Lead" is sure to get your engine going with intense beats, enticing piano accompaniment, beautiful synthesizer melodies, and mesmerising harmonies. It also features some racing-inspired lyrics that are sung in a spoken word sort of style by Aimee Blackschleger, similar to her work in Final Fantasy XIII-2, although I find this rendition of her spoken word style to be more enjoyable thanks to the melodic focus of the melody. Ryo Watanabe's "Sliding Beat" is very similar to his contributions to the NanoSweep series, focusing on heavy beats and electronic effects in the background with sporadic moments that are more melodically focused. I find it a very fitting combination and it definitely gets the blood pumping.

There are two psytrance influenced themes on the album as well. The first, "Purple Sky" by AJURIKA, is quite enjoyable, giving off a heavy racing vibe with its intense beats and really catchy melodic hooks. Compared to some of his previous psytrance work for his original album Samurai Damacy and the Tekken series, I find it to be a bit less creative, but it is definitely enjoyable, especially if you are a fan of the genre. The other theme, "Super Acceleration," is composed by newcomer Kyoko Miyakura. I find this to be an extremely satisfying piece of music. It combines AJURIKA's psytrance style beats with Yuzo Koshiro's more trance-like melodies from his work on the Wangan Midnight Maximum Tune series. I definitely look forward to hearing more of her work, whether it is for the Tekken series or the Ridge Racer series.

"Digital Horizon," by Rio Hamamoto, also has a bit of a psytrance beat going for it, but unlike the other two themes mentioned above, it combines a lot of other elements to create an interesting fusion of sounds, ranging from more dance style beats and some dubstep influence to distorted synthesizer tones, vocoder usage, and some rock influence. Fans of Hamamoto's Tekken and Ridge Racer works will definitely enjoy this one. The last theme by current members of the Namco Sound Team is "Racer's Delight" by Taku Inoue. For a quick comparison, it's similar in style to "Nitro Right Now" from the Ridge Racer 3D Original Soundtrack, featuring the similar ascending and descending tones that sound as if they are manipulated acceleration and deceleration sound effects from the game itself and distorted vocal samples. Unlike "Nitro Right Now," it's a bit edgier and also features some more rhythmic dance beats.

When it comes to the pieces by former members, Yu Miyake's "Future Driven" is most similar in style to "Racer's Delight," while still retaining its own identity. There are sections that seem to feature that acceleration sound effect manipulation, as well as a heavy reliance on vocal samples, but the majority of the theme has a bit more of a melodic focus than "Racer's Delight" and has an infectious beat. It's a very dissonant piece of music at times, which may turn away some people, but I find it to be very intriguing and a very fun tune. "Virtuoso," by sanodg, is definitely the most soothing tune on the soundtrack, reminiscent of music you might hear on Ridge Racer 6 and Ridge Racer 7, as opposed to the handheld soundtracks. What I find most successful about this track is the various synthesizer harmonies and effects that work together to create a beautiful, captivating melody, while still at the same time, with the help of the accompanying beat, give off a sense of driving focus.

Lastly, Shinji Hosoe and Ayako Saso, under their Sampling Masters aliases, contribute to the soundtrack. Hosoe's "The Time is Now" offers an intense electronic beat, although not as intense as some of his more hardcore Ridge Racer works, with a rock focus. While the track starts off fairly slow, as it progresses, it gets a bit more upbeat in tempo, throwing in some vocal samples, some distorted and wobbled synthesizer effects, and really has the sense of a race. Lastly, Saso's "Take You Away" is quite different from her usual contributions to the series. Unlike her crazy stylings from recent Ridge Racer games, her track is more subdued, yet it still gives off an insane amount of energy. Even though the tempo is slower than most of the tracks on the album, you still get a sense of urgency. However, what truly makes this track shine are the mellow sections with beautiful synthesizer harmonies and vocal samplings. Towards the end of these mellow sections, there are times where it gets more intense with a bit of a sinister tone, but all in all, I think that track comes together quite nicely, despite the different elements that are introduced throughout the duration of the track.

In the end, I think that Ridge Racer Planetary Sounds is a nice mixture of more modernly influenced music from Ridge Racer as well as music that captures the series' past. There is something here for both fans of old and new Ridge Racer music and everyone from Namco as well as former Namco put together a very diverse selection of music that really captures the racing atmosphere in a variety of ways. I definitely recommend this for all fans of the Ridge Racer series' music.

Presale at the PlayStation Vita RIDGE RACER NIGHT on March 3. 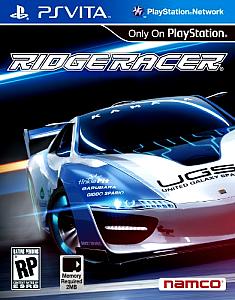