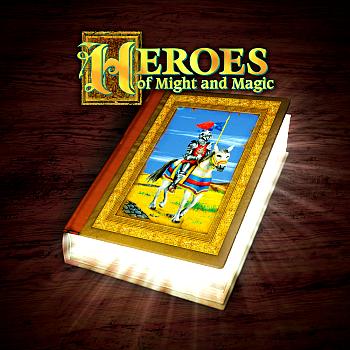 Heroes of Might and Magic: A Strategic Quest
Front

For game score fans, Heroes of Might and Magic marked a momentous occasion, as it was the project that brought together prolific composing duo Rob King and Paul Anthony Romero. Not only would their names become synonymous with the now famed music of Might and Magic, but their collaboration would also extend far beyond this franchise. King, who came from a rock background, had worked on three other New World Computing games before being drafted by Jon Van Canegham to write the music for Heroes of Might and Magic. Around the same time, King was introduced to Romero through a mutual friend, and impressed with Romero's piano playing skills, King asked him to co-compose Heroes of Might and Magic. Romero, who had never played a video game before, came from a background squarely opposite to King's. A former child prodigy, Romero had already performed around the world as a classical pianist before the age of 15. Graduating from the world-famous Conservatoire de Paris, Romero had however dropped out of music performance after finishing his musical training. It was Heroes of Might and Magic that would bring him back into composing and performing after years of working in various random jobs.

To convey the game's heroic fantasy universe, King and Romero decided upon writing a baroque score with a strong classical feel to it. The duo created the score for Heroes of Might and Magic in King's studio, which in his own words was “basically my bedroom with tons of gear and a small futon in the corner.” The collaboration proved fruitful and would mark the beginning of one of Western game music's most revered franchises. However, like all Heroes of Might and Magic soundtracks until 2011's Might & Magic Heroes VI, Heroes of Might and Magic: A Strategic Quest initially didn't receive a commercial soundtrack release. This only changed a good one and a half decades later when GOG.com released the game as a digital download and offered the soundtrack as a free bonus item. That release has a running time of about 20 minutes and omits the game's South American-tinged battle tracks. However, as on all Heroes of Might and Magic titles until the franchise's fifth iteration, these combat cues are not particularly spectacular in the first place.

Few game soundtracks start with a gesture as confident as Heroes of Might and Magic on “Barbarian (Theme for Louis XIV)”. Doubtlessly influenced by Romero's background in classical music, the piece isn't a simple Baroque pastiche that only mimics that era's sound. Instead, it also shares Baroque music's structural inclinations, particularly its reliance on counterpointal constructs. “Barbarian (Theme for Louis XIV)” opens with a busy harpsichord figure that is soon joined by a growing number of instruments that play the motif or variations of it as a fugue, until a whopping five different voices simultaneously perform in counterpoint. The resulting passage is of a structural complexity that one rarely encounters in game scores and it showcases two things: that the two composers at the helm tackle Heroes of Might and Magic with obvious enthusiasm, and that their compositional prowess is indeed impressive.

While the rest of the short album isn't as dense as its beginning, King and Romero's ambitions constantly shine through in the pieces' remarkably intricate and rich textures that draw upon both Baroque music's motoric drive and the lush melodicism of Romantic classical music. The pieces' constantly interweaving melodies and countermelodies are a pleasure to behold. They effortlessly create a tapestry of sounds that feels truly symphonic enough to realise the composers' ambition of writing a score that's somewhere between game soundtrack and classical music. Even short pieces like “Title” and “Win” become noteworthy through the sheer amount of enchanting details that are packed into their brief running times. Cues like “Warlock”, “Sorceress” or “Barbarian (Theme for Louis XIV)” become even more structurally convincing and coherent by being based on variations of a melody particular to each track. These variations are treated with as much meticulousness as all other aspects of the music and aren't just repetitions of a once established motif, but instead rework and elaborate upon the original material.

But beyond these more technical aspects, what will draw listeners into Heroes of Might and Magic the most is the beauty and the richness of its melodies. The score's melody lines are a constant pleasure, always catchy, charming and toe-tipping when the music requires it. These welcoming characteristics are enhanced by the music's generally sunny demeanour, which is also a result of the composers' fondness for warm instrument sounds. Woodwind lovers who enjoyed the pastoral sounds of Dynamedion's Anno and The Settlers scores are in for a field day with Heroes of Might and Magic, which features similarly idyllic soli for oboe, clarinet, flute and even bassoon. Prominent roles for harp, harpsichord and acoustic guitar further increase the immense attractiveness of the compositions. And although most of these instruments are synthesised, the quality of the chip synthesis is convincing enough to let the melodies shine. It also demonstrates how far ahead PC games were of console titles in regards to the quality of their sample sounds back in 1995.

This prevalence of a generally inviting and charming atmosphere doesn't mean that the album's atmosphere is monotonous. Far from it, in tune with the music's mature melodic structures, Heroes of Might and Magic's pieces are fully-fledged compositions that develop most satisfyingly and further enhance the music's symphonic weight and breadth. “Knight”'s opening maintains “Barbarian (Theme for Louis XIV)”'s light-hearted Baroque attitude with a slightly more regal attire, before the track alternates seamlessly between vivacious and reflective episodes that are held together by melodic material that finds just the right balance between repetitiveness and catchyness. “Sorceress” begins with starker sounds than previous cues and pits a defiant horn melody against strongly emphasised violin pizzicati, before a catchy harp motif that glides across the stereo field takes over. This in turn leads to a spell-binding orchestral section which mixes the playfulness of earlier pieces with a dash of mystery.

This impressive degree of variety within compositions is also mirrored in the album arc that the soundtrack manages to establish despite only running for 20 minutes. After the lighter strains of “Barbarian (Theme for Louis XIV)” and “Knight” lead into “Sorceress”' more enigmatic territory, the mood darkens somewhat with “Busy” and “Warlock”. The latter composition is just as elaborately constructed as the rest of the album, but its woodwind soli are sharper and harmonically more ambivalent, just like its background string harmonies. The mood is more forlorn and introspective and tellingly, the melodic focus is now more on the colder, tinkling sounds of harp and harpsichord instead of on rhapsodic woodwind soli. But things cheer up just in time for the final track “Campaign”, which convincingly works its way from a droll bassoon solo to a stirring orchestral flourish, replete with triumphant fanfares and bell strikes.

Heroes of Might and Magic: A Strategic Quest establishes a number of characteristics that would come to define the sound of the Heroes of Might and Magic franchise, at least until Heroes of Might and Magic V. The melodies on this Baroque-inspired soundtrack are gorgeous, the density of melody lines and textures is second to none, the composers' counterpointal writing is consistently impressive, and the compositions' development is exemplary. Due to the lack of a dedicated soundtrack release, Heroes of Might and Magic hasn't yet attained the elevated status in the history of Western game music that it deserves, as it highlights that even back in 1995, there were game scores of true symphonic weight out there. And what's more, due to the score's light-hearted attitude and warm instrument soli, it's simply fun from start to finish. $10 for twenty minutes of music is admittedly a steep price, but remember that this also gets you the game itself. And there's no doubt that Heroes of Might and Magic is stronger than most other fantasy game scores that run longer and cost the same. Later soundtracks in the franchise would increase the music's scope and ambition, but this is where it all started, and in most promising fashion.