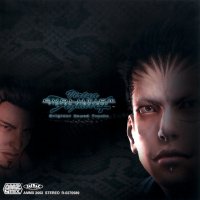 One thing that's amazing about Virtua Fighter Evolution's soundtrack is that it's completely different from Virtua Fighter 4's even though the games were so similar. There are plenty of new themes on the album release and I think most fans of the series will be happy hearing some new music. While evidently there was a change between the two games, did Fumio Ito's approach to Virtua Fighter's music result in an evolution or devolution?

Virtua Fighter Evolution features some of the most enjoyable music of the series. Compared with Virtua Fighter 4, this soundtrack has many more hooks. The catchy melodies of "Flowers to Dead Spirits" and compelling percussion of "Real Image" are just two interesting examples. Even some of the more generic tracks based on guitar riffs have something more about them. "Unreasonableness" is especially memorable, relative to similarly styled tunes elsewhere on the series.

Having delved into techno before with Virtua Fighter 4, the composers explore the water a bit more in this one. Sachio Ogawa notably makes guest contributions such as "Hates a Person Like Poison", blending rock riffs with electronic beats. While I'm not the biggest fan of this style, many will enjoy it and it is spectacular in context. With the diversity and energy of this soundtrack, it makes for two important ingredients to making a Virtua Fighter soundtrack work.

That said, there are sitll many boring tracks here based on little more than chord sequences. "A Nursery Rhyme" is an example of a repetitive guitar heavy track that is simply not worth listening to on its own. To compensate, the soundtrack comes with some interesting bonus remixes that excel over previous bonuses. "Push Your Luck" and "It's Mine, Mine, Mine, Mine!" are both of the calibre one would expect from top DJs.

Newcomer Fumio Ito really brought a small yet welcomed spark to the series in my opinion on Virtua Fighter Evolution. It still has a lot of flaws, but it is mostly an enjoyable and fitting soundtrack. If you are a fan of fighting game music, then you will most likely love this as it is one of the best in the series and has some of the crispest sound quality. It's just a pity that the even better Virtua Fighter 5 never received an album release.

Album was composed by Fumio Ito / Кэисукэ Цукахара / Sachio Ogawa / Yasuhiro Takagi and was released on September 04, 2002. Soundtrack consists of tracks with duration over about 55 minutes. Album was released by AM2 MIX.