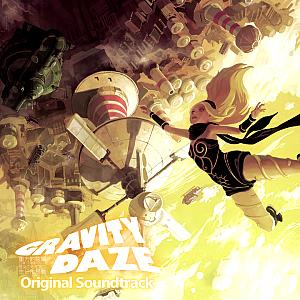 The first big original IP for Sony's new Playstation Vita, and the latest creation of Keiichiro Toyama, was Gravity Rush (known as Gravity Daze in Japan). While conceived by the creator of Silent Hill, it's about as far from survival-horror as could be envisioned with its gravity-manipulating gameplay. It was scored by Kohei Tanaka, a prolific anime and film composer best known for Sakura Taisen. Tanaka brings his usual airy and flowery orchestrated style to the forefront for this work.

It is with "GRAVITY DAZE" that the album hits its stride with an air of magnificence. This, the main theme of the game, is simultaneously impressive and inspiring, grasping the listener's attention and not letting go. With its orchestral flourishes and melodic beauty, the album shows its true colors with this piece. The entire album is peppered with these melodically and compositionally impressive pieces. "Resistance and Extermination" is perfectly thrilling and exciting. Likewise, The synth weaving through "Bloody Claws" augments the jazzy orchestration with fluid melodies.

The graceful introductory piece "Discovery of Gravitation" which establishes the feel of the work as one of Parisian influence due to its usage and reliance on the accordion. Gentle, airy, yet playful, "Old Town" delights despite being so laid back. It is only superseded by the Parisian "Downtown" whose grace and magnificence do naught but impress. "Recollection" meanwhile is achingly beautiful and melodically profound. This string quartet, while unfortunately short, can be listened to on repeat for hours. "Ease" provides yet another extremely pleasant listening experience.

That said, there is some less inspiring material on the soundtrack. "Omen" and "Gravity Storm", dip temporarily into a bit of mediocrity. While well composed, they are repetitive tension themes that, when placed side-by-side, are a tad wearing. The following "Sorrow" doesn't help much either, as, while nice and pleasing, it doesn't quite thrill the listener like "Recollection" does. Likewise, "Passing Moment" is pleasant yet ultimately somewhat boring amidst the masterpieces featured elsewhere on the score.

There is still some astounding variation to be had on this album. Three areas in the game have unique, synth heavy themes. "Ruined Paths" brings to mind an alluring, imaginative outer space-like soundscape, which provides personality to the harp and pizzicato strings that pepper the rest of the piece. "Infernal Paths" is a bit sillier, in both the synth used and the melodies composed, but contains an attractive beat that keeps the listener enthralled. "Fascinating Paths" is very bass heavy, almost reliant on its beat. Of the three, this is the least melodically interesting, though it is by no means weaker for that reason. Each of these is an experiment in its own right, and Tanaka impresses on all fronts.

Referred to earlier but not yet explicitly stated, there is a large jazz influence. "Pleasure Quarter" brings to mind a town with a seedy underbelly and suspicious nightlife. The violin and saxophone interplay quite exquisitely to create an extremely alluring piece of music. On the other end of the album is "Assault Cnida," the game's penultimate battle theme that, while a bit more orchestral in nature, stands apart from the rest due to the saxophone's large, chromatic presence, which lends an air of urgency and panic to the theme.

The orchestrated pieces near the end are no less impressive. From the uplifting brass of "Trump Card", to the imposing, slower paced yet no less exciting rumbling of "Paritoa Toxica," Tanaka shows he is certainly back on the ball. "Decisive Battle," the final battle theme, features a church organ that provides an austere air to an otherwise intimidating, heavy piece. The game's vocal, arranged by Yasuhisa Murase and sung by Masako Toda, is a fun-loving and exciting jazz piece. Tanaka's melody, combined with Murase's arrangement and Toda's vocals, creates an utterly irresistible mix.

Overall, Kohei Tanaka did an excellent job providing a colourful accompaniment to Gravity Rush's physics-defying game. This album isn't quite perfect, with a good few number of tracks that are either uninteresting or otherwise fail to impress. However, there's more than enough here to make this a convincing purchase for any interested party wanting something that features light yet complex orchestration, with some more jazzy bends and creative touches throughout. Definitely one of the best albums of the year thus far.

Album was composed by Kouhei Tanaka and was released on March 21, 2012. Soundtrack consists of 47 tracks tracks with duration over . Album was released by Team Entertainment.

Sounds like Cabaret, Classical, Jazz - that's what we can say about this album.