Castlevania: Symphony of the Night - Resurrection 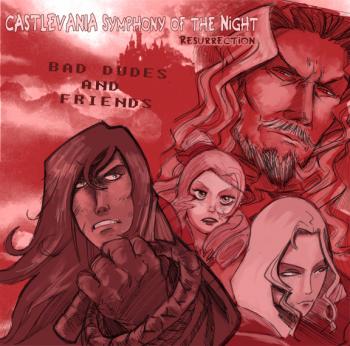 Bad Dudes Music's Castlevania: Symphony of the Night - Resurrection is generally a winner. The group paid close attention to most things that are needed for a good listening experience, starting with the important step of selecting worthy source material in the form of Michiru Yamane's legendary score for Castlevania: Symphony of the Night. Furthermore, The Bad Dudes write interesting and varied melodies, their album has a coherent feel, and they perform their compositions expertly, although some easily-correctable production errors significantly detract from the album's quality. Perhaps most importantly is that the group does not fall victim to the "one hit, many duds" trap that many pop artists tend to encounter. While some tracks stand out more than others, all but one is strong. Available on the group's site as a free download, this album is worthy of attention.

If there's one sentence that can sum up this album, it's that it doesn't sound like a video game album for all but the last three minutes. Someone who has never heard of Castlevania before and who is emailed a zip file containing these 15 track, would probably think that the work is simply a good album by a mostly instrumental band with which he or she is not familiar. The artists are pretty liberal on the arrangements here, which I think is a positive. There's no shortage of inspiration, and the complex background harmonies avoid the "MIDI rip" trap that some video game remixers can fall into even unintentionally. This album sounds like the contributors wrote original songs first, and then added the Castlevania melodies after they had the ideas for the music down. If true, this "original-first" method is something I would love to hear more remixers use going forward.

A particular standout, and perhaps the highlight of the work, is "Take Back the Tears". The saxophone playing by Anthony Lofton on this track is amazing, and it's of the level that it could be played on a smooth jazz radio station with nobody noticing anything out of the ordinary. The style is very similar to Rick Braun and Richard Elliot's 2009 release RnR, perhaps taking a few additional influences from Kenny G. It's one of the finest pieces out there in the video game remix community, but it falls short of perfection because the arrangement ends without resolving. I was incredibly disappointed that a remix that continued to get better and better as it went on could have been perfect if someone had just added the tonic note onto the open cadence at the end. Despite this flaw, however, the track is a must-download.

Other noteworthy tracks include "Apparitions of Clock Tower" a mysterious piece that reminds me of the modern-classical style of the British group Bond. "Nocturne" is a piano-focused arrangement that flows well and is capped with great production. Unfortunately, its production value is not consistent with its neighbor, "Empty Frame" a rap track that has a good melody but where the vocals are so quiet that it's impossible to make out what the rapper is saying. Because of this production error, "Empty Frame" is unlistenable, and the problem could have been easily corrected with better mixing.

Two tracks worth pointing out for their presentation are based on "Wood Striking Partita". Track 4 is an interlude, leading into track 5, a piece that features excellent sequencing but is too short. I've never been a big fan of interludes on CDs, because I feel that, rather than preparing the listener for the next theme, interludes pull them out of the experience. An interlude should never be included on a CD because if it's strong enough to play as a track unto itself, it should simply be prepended to the feature presentation. Here, the group would have been better served by following this logic of combining interludes with their main tracks, because track 4 is stronger than most interludes and because track 5 leaves the listener wanting more.

One detail that shows that The Bad Dudes are a group that knows what they're doing is the attention they put into making sure that familiar melodies are present thorughout the tracks. Professional game and movie soundtrack composers will often use leifmotifs to anchor a character to a particular piece of music, and will focus on the various motifs throughout pieces when the motifs' associated characters are featured. In Resurrection, The Bad Dudes make sure to hint at various themes throughout the album. For example, listen to tracks 4, 14 and 15, and you'll hear the game's main theme featured either subtly or prominently. This is how to tell a story with a soundtrack — by developing themes until they reach their glorious conclusion in the last track. Many producers of albums in the video game music community would do well to learn from The Bad Dudes when it comes to album storytelling.

The last track, "Heart of Vlad," is a secondary highlight of this album. The buildup in the first 30 seconds is spectacular, and the first few minutes slowly introduce more and more instruments in a completely natural way. Transitions remain strong throught the majority of this piece, but then everything begins to break down towards the end. It's perplexing that no game audio exists throughout the entire album, yet the artist Joshua Morse decided to add samples from the game here. The beginning of this track would have been a fitting conclusion to the entire work as a whole, but the game voiceover is unnecessary and comes at the worst possible time. The end is not the place to break with the previously established style, and the voice detracts from what is otherwise a great album.

Castlevania: Symphony of the Night -Resurrection is an expertly written, superbly performed, and mostly well produced album that is worthy of any game music fan's collection. With only one weak track, listeners won't find themselves messing with the "next" button throughout this CD, and I repeated the excellent "Take Back the Tears" several times. The album's main shortcomings seem to be easily-corrected production errors or design decisions, but these errors nonetheless have a major impact on the listener's enjoyment. On a whole, if money is correlated with value, since Resurrection is one of the group's free offerings, their paid offerings must be phenomonal. I certainly look forward to being given the opportunity to review more albums from The Bad Dudes in the future.

Some Bad Dudes, with the help of some friends, take on the legendary Symphony of the Night soundtrack by Michiru Yamane. The release comes just in time for Halloween (though it's not really spooky, but if you don't like it, go suck an egg). You know the drill by now - download this and prepare for radness. If this is your first time with the Bad Dudes, check out our other EPs. And remember to donate money - it helps pay for the Holy Water. Artwork by 8BitMaximo.