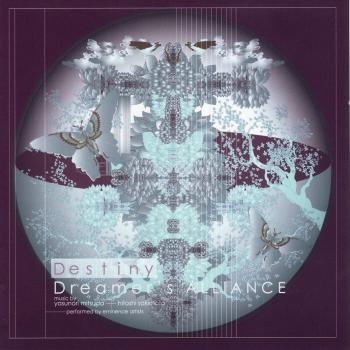 Basiscape's Odin Sphere was the first place I had heard about the Eminence Symphony Orchestra from. Since then, that name seems to be popping up everywhere. They seem to be gaining popularity (or maybe I'm gaining awareness of a preexisting popularity) that is very well deserved. Why, just the other day, I found a video of them on YouTube performing Uematsu's famous, bordering on infamous, "One Winged Angel". With Destiny - Dreamer's Alliance, the Eminence Symphony Orchestra is stripped down to a piano quintet, performing a selection of tracks by Yasunori Mitsuda and Hitoshi Sakimoto. Most selections come from the composers' respect works KiRite and Romeo X Juliet. Because of the diverse selection presented here, I think it best I focus solely on how the pieces function by themselves, not necessarily how they function as arrangements.

You might think that because of the somewhat limited instrumentation of these selections, there will be no variety. The first track, "Opening", from Tsugunai: Atonement, puts this fear to rest with the Eminence Piano Quintet performing once of Mitsuda's more lively Celtic pieces. This is not standard piano quintet repertoire! While the performers do very well, Celtic music requires a certain lilt that I'm afraid is absent from this performance. Even still, it's a riveting way to begin an album. Continuing with Mitsuda, I had never heard of Rakugaki Kingdom II, but I may be persuaded to check it out after this selection, "Hako no Niwa". The beginning is lush and romantic, but a short interlude for pizzicato provides the transition to a truly beautiful melody. Silence here is used to great effect, letting the piano resonance to fill the air. The piece is constantly juxtaposing between a very serious, heartrending expression of the melody and delightfully playful. By the end of the piece, romantic and lush have won, and the piece ends softly with solo piano. It's very interesting musically for all of its subtle touches, but it is not one of Mitsuda's more memorable pieces. I've always liked "Sailing to the World" from The Seventh Seal and wished for an instrumental arrangement, since I wasn't too fond of the vocals in the original. Solo violin plays the soaring melody here. It's a simplistic arrangement, but thankfully, Mitsuda's melodies more than speak for themselves. "Nephilim" from Xenosaga Episode I was one of my favorite pieces from that soundtrack. The seamless integration and contrast between dreary and hopeful phrases within a singular theme is admirable and makes for a very complex selection, the most overtly Classical on the album.

I remember being very disappointed seeing the phrase "performed by the Eminence Symphony Orchestra" on the score to Odin Sphere and finding out that it was only a piano quintet that performed two tracks. Though I've grown to love those two pieces, I have always felt that it was somewhat of a missed opportunity. Luckily, because of the nature of this album, those two pieces fit in rather well this time around. The first, "Main Theme", showcases a very romantic and memorable melody. I admire Sakimoto for his theme writing, for he always comes up with something suitable for the situation and usually something that he can weave throughout the entire score in subtle ways. Unfortunately, his themes have never been quite memorable, however that seems to be changing as of recently, especially with Odin Sphere. The violin takes the melody here while piano provides a steady continuo. The theme is first presented very gently, and then it is repeated twice, building in intensity each time until the heart-wrenching finale. The next piece from Odin Sphere, "Attic Library", is more of what you'd expect from Sakimoto. It is playful, quirky, and contains a few harmonic and melodic surprises. Pizzicato strings take the foreground here, punctuated by piano, before a more fluid melody for solo violin takes over, bringing the piece to an equally quirky climax (with trills!). Unfortunately, the staccato nature of this piece gets tiresome very quickly, and also, the piece doesn't really develop more than simply repeat the same few phrases over and over. It's still a great piece of music, but one that will not warrant repeated listens.

Onto the selections from Romeo X Juliet, the first piece presented is the "Contact". It is a piece that shows off Sakimoto's piano work; it is very interesting how the instruments interact. Sometimes the violin carries the melody, other times it trades with the piano and takes the harmony, and some of the more emotional moments come when the strings are dropped altogether, and the piano is allowed to simply carry the melody. My only gripe with this piece is that when the refrain is repeated with violins, one of the violinists doesn't quite hit the high note. It's not terribly noticeable, though, and is no hindrance to the quality of the piece. The original "Various Thoughts" from Romeo X Juliet was already written for string quintet, so there's little difference between this and the original performance, other than it's played a tad slower. It presents the main theme of Romeo X Juliet in a minor-key variation and there's a wonderful, yet very short, interlude where the music gets very choppy as it builds to a climax. The one thing about this musical climax is that it's not really louder, but somehow the performers evoke a much greater emotional response with the music in the last few moments. Thank goodness the Romeo X Juliet tracks are not together in this album, because what starts out as a promising new lively, light-hearted piece, turns into… you guessed it, another variation of the main theme. With "Vigor", there's still enough variation to keep it from sounding the same as the other arrangements. It keeps the tempo up for the most part and adds some creative dissonance here and there for more contrast.

Now on to the next Romeo X Juliet arrangement, and the only thing I have to say about it is to refer you to my previous comment — thank goodness these selections are not grouped together. We have a slower, yet still major-key, variation of the main theme with "Oath". This time, the piano takes on the melody underneath a wash of strings. While "Vigor" made me a bit peeved because of the lack of creativity with the arrangements (how many versions of the Main Theme do we need?), "Oath" made me downright angry. In the original score, such occurrences of the same theme were understandable, since Sakimoto had an obligation to keep thematic continuity, but on an arranged album, the first two variations were enough. They don't really deserve to be called "variations" on the Main Theme, for that would imply something clever and different, making each occurrence of the theme unique. If that had been the case, then I would have no gripes, but the main theme in these selections remains, for the most part, unchanged from track to track. "Am I going to have to sit through another performance of the Main Theme?", I thought to myself, knowing that there was only one more selection from Romeo X Juliet. Then I got a look at the title: "Neo Verona", which happens to be my favorite piece on the original soundtrack. The album has been redeemed, taking a playful orchestral tour-de-force and translating it to piano quintet flawlessly, recapturing the essence of the original. In ways, it probably surpasses the original in dynamics. While on the original, even in the softer moments, the sheer force of the orchestra always came through. Here, the strings can be stabbing and threatening, flighty, and exuberant, and then seamlessly, they can become languid and yearning. The selections from Romeo X Juliet end on a high note.

The arrangements from KiRite fare much better than those from Romeo X Juliet. To begin with, the original KiRite was very varied in style, and while there was some thematic development along the way, it was more a collection of set pieces than a congruent score. This makes for some splendid arrangements. The original "Nocturne" was always a bit odd sounding because of the combination of piano and fiddle. Here, the fiddle is replaced with a cello. Though Mitsuda's Celtic-inspired themes require a slight spring in the performance, that same lilt did not translate too well for the original "Nocturne", making this arrangement an improvement in my opinion. Mitsuda has a gift with melodies as well as atmosphere; here, when the melody plays, it makes your heart soar along with it, but when he abandons melody for atmosphere, with repeated piano figures and wandering cello solos, the result is equally intoxicating. Next comes "The Fall of Darkness", a fairly standard Mitsuda Celtic-inspired piece. It's not outright Celtic, but the influence is there. The piece is also an exercise in layering. It starts with a single phrase by the piano, before the strings provide gradually building harmonics out of which a searching, determined melody emerges. Then the entire piece quiets down again, only to build and build into a climax. The original "Circle of Eternity" was for solo piano, as it is here. It is a poignant melody with sparse harmonies that create a very empty longing feeling.

Circle of Eternity" from KiRite is hard act to follow, but luckily they truly have saved the best for last. "Radical Dreamers" from Chrono Cross is the highlight of the album not only because it features one of Mitsuda's best themes, in my opinion, but also because it is the only piece to branch out from the otherwise sparse orchestrations, featuring an acoustic guitar, the instrument that services Mitsuda best. The acoustic guitar provides the harmonies in the form of arpeggiations and open chords while a hopeful melody is provided by the violin. The rest of the piece follows suit with the melody eventually being taken over by the cello. The piece is then left to the acoustic guitar once more for the finishing chords—an overall satisfying end to an album.

This album is a mixed bag for me. Despite my love for Hitoshi Sakimoto's music, I found his works to be among the least interesting on this album. It's not that his pieces aren't good. In fact, the pieces from Odin Sphere are absolutely delightful, as is "Dash" from Romeo X Juliet. His Main Theme for Romeo X Juliet is among his best, but in this case too much of a good thing is a bad thing — a very bad thing that puts a damper on the entire album. Luckily, our dear Yasunori Mitsuda's pieces are allowed to absolutely shine. Other than my mixed feelings about the "Opening" from Tsugunai: Atonement and "Hako no niwa" from Rakugaki Kingdom II, Mitsuda has not a single weak track on the album. All of his pieces are at the very least decent, and most are absolutely spectacular. Pieces like "Radical Dreamers" absolutely show Mitsuda's skill when it comes to writing a melody. Forget the Sakimoto pieces, this CD is essential simply for Mitsuda's work. Unfortunately, I cannot simply overlook Sakimoto pieces, for which I would give a generous 6 out of ten, so the final score, averaged with a 10 out of 10 for Mitsuda's music yields a very respectable score.

'Destiny' was an internationally acclaimed concert tour by an elite piano quintet from the Eminence Symphony Orchestra, debuting in Yokohama, Japan on the 16th of July, 2007.

The tour took the group to three different continents, including the countries Japan, Australia, and the United States of America.

It features official arranged versions of selected pieces from Gonzo's recent hit anime series 'Romeo x Juliet', with music by Sakimoto.
Album was composed by Хитоси Сакимото / Ясунори Мицуда and was released on November 11, 2007. Soundtrack consists of 15 tracks tracks with duration over about 45 minutes. Album was released by Eminence.