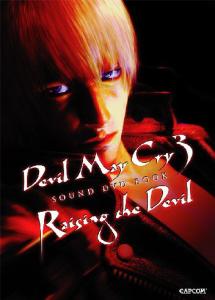 The last in Capcom's series of visual soundtracks was the Devil May Cry 3 Sound DVD Book - Raising The Devil. This set contains a region 2 DVD featuring 21 full-length audio tracks set to videos featuring action from the game. Included were two tracks exclusive to Devil May Cry 3: Special Edition, a bonus electronic remix, and a 48 page booklet with illustrations and liner notes. Unlike previous instalments in the Sound DVD Book series, the set has an almost exclusive focus on action tracks and is mainly dedicated to portraying the action rather than the story. Was it the correct approach? Is it a mainstream fan's dream?

The album opens with the first battle theme "Raising the Devil" as opposed to the "Prologue" that might have been anticipated. The distorted rock riffs reinforce Dante's cockiness exaggerated in the extravagant action scenes. The subsequent "Roar of Anger" introduces the heavy metal style of the title and accompanies scenes of the rise of the Temen-Ni-Gru, Dante's first journey, and his encounter with Cerberus. This theme create a great amount of aggression with their edgy vocals and compelling rhythms, though the overly-Americanised pronunciation of 'suffer' makes me cringe every time. A select taste, the heavy metal normal battle theme "Out of my Way" follows the Sound DVD tradition of introducing the enemies of the game one by one. "Hot as a Bullet" introduces further enemies with an especially buoyant and catchy heavy metal theme. Rounding off the heavy metal selection, Cerberus' battle theme reappears later in the DVD with the harder, meaner variation "Gigantic Guard" to accompany the battle with the doomed Beowulf.

The majority of the remaining boss battle themes take a riff-based grunge approach featured in Devil May Cry 2. A lot of character is expressed in the thickheaded guitar and string layering for "Fire & Ice", which introduces the interior of the Temen-Ni-Gru and later underscores the Agni & Rudra battle. Scenes of the detour and battle in Leviathan's guts are accompanied by an organic-electronic fusion battle theme while Nevan's "Hot as a Bullet" supports the game's most erotic encounter with a bubbly trance fusion. Of all the battle themes, Geryon's seems to have the least going for it — little more than a repetitive assembly of riffs — but even this works quite well in conjunction with the trippy video. Probably the most intricate of the bunch is Doppelganger's "In the Shadow", which blends rock, orchestral, and techno elements with an emotionally charged video. Lady's "Vengeance" does not feel anywhere near as novel or important as it should do and the video barely features the encounter. More focus is placed on her in the only event theme for the title, the soft strings- and piano-based "Her Mind Surrendered", which is truly moving in combination with the video yet out-of-place with the rock theme of the DVD.

The biggest highlights of the selection are the three battle themes with Vergil, each of which is introduced by cinematic event. "The Encounter" is an adrenaline-pumping blend of rock and techno forces that takes an introspective turn to capture the emotions of the feuding brothers. "One More Game" ups the ante with aggressive racing bass riffs and epic use of orchestra and chorus leading to an unbelievably emotional incorporation of the main theme prior to the loop. Of the stage themes, only the final one for the demon world is featured in the soundtrack, but it is ultimately a good one — introduced with a organ and chorus hymn before taking a deliciously twisted turn. It segues into the encounter with Arkham with the especially dissonant "Out of Control". The third Vergil battle theme "Blood on Blood" is a jaw-dropping full orchestral finale that incorporates multiple sections to set the stage, contrast anti-hero and villain, and recapitulate the main theme. The visuals create very evocative imagery, though don't quite cross the boundary to being spectacular.

The selection is wrapped up by the highly enjoyable staff roll theme "Devils Never Cry", which cleverly blends heavy metal with a new take on the main theme. As with past staff roll themes in the Sound DVD Book series, it is supported by a reflective montage of the action in the game. The theme also receives a straightforward 'Dark Half Mix', but it's nothing special, merely incorporating a few extra electronic beats here and there. A better bonus are the two themes specifically created for Devil May Cry 3 Special Edition. "Jester Battle" blends the typical rock-electronica style of the soundtrack with the mischievious repeated xylophone notes used to portray the character in several event themes. Though "Vergil Regular Battle" is basically a straightforward technofied arrangement of Dante's first normal battle theme, the supporting video is very enjoyable. These two additional tracks were also included in the album compilation Devil May Cry Dangerous Hits.

The Devil May Cry 3 soundtrack definitely deserved some sort of 'best of' soundtrack given the amount of filler tracks on the full score. However, this particular selection is quite limited — focusing on the similarly constructed battle themes for the game and portraying mainly the action of the game rather than the actual story. Rather than being a diverse and colourful experience worthy of the Devil May Cry title, it attempts to be a mainstream-oriented rock album with a few out-of-place bonuses. The Devil May Cry 3 Sound DVD Book - Raising The Devil therefore doesn't compensate for not owning the soundtrack, but it might please those who particularly liked the game's battle themes and action sequences.