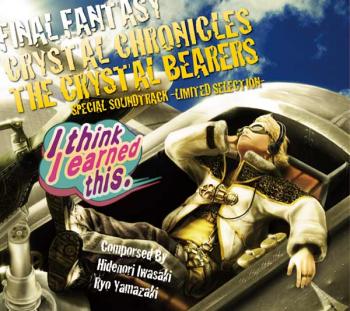 One of the most noteworthy features of Wii's Final Fantasy Crystal Chronicles: The Crystal Bearers was its soundtrack. In contrast to earlier titles in the Crystal Chronicles subseries, Kumi Tanioka took a backseat and allowed former synthesizer operators Hidenori Iwasaki and Ryo Yamazaki to demonstrate their compositional talents beyond the Front Mission series. This sampler, given to Japanese players who registered the game through the Square Enix website, provides some insight into the musical styles to be expected from the full release.

Hidenori Iwasaki's instrumental main theme for the Crystal Bearers is introduced in the first cue. While perhaps not as expansive or memorable as some of Final Fantasy's past melodies, it makes up for it with its bombastic Americana flavour and urgent yet heroic character. It certainly depicts the attitude of the protagonists to a tee, yet is also instantly compelling out of context. This particularly version of the main theme is exclusive to the promotional soundtrack and digital release. Later in the album, "Beyond the Horizon" demonstrates Ryo Yamazaki's more fantastical orchestration style. It is full of the boldness, imagination, and passion that so well-characterises Crystal Chronicles' adventure.

Nevertheless, there are a number of harder contributions to the soundtrack. "Bullet Rain" is very reminiscent of Dirge of Cerberus' battle themes, with aggressive rock riffs being juxtaposed with agitated orchestrations. Though not all will like it, initial videos indicate it's ideal for representing gruelling encounters during the game. "Snarky Tough Guy" is also an electric guitar-driven theme, but is more of a redneck anthem than a battle theme. It's surprisingly intricate during the development sections too. Love it or hate it, this composition certainly enhances the game's unique image.

Despite the generally new direction for the soundtrack, Kumi Tanioka's influence is felt in two of the selections here. Hidenori Iwasaki's "Little Domaine" could easily fit in the original Crystal Chronicles with its nasally woodwinds and rustic lute backing; however, it isn't just a fan service since it still works well in the vineyard setting too. Ryo Yamazaki also arranges a Crystal Chronicles favourite at the end of the sampler, "Moonlit Starry Night". While the brisk bluegrass arrangement is impressive, perhaps what is most delightful about it is Tanioka's underlying lyricism. Overall, a good mixture of new and old.

This promotional album gives a promising insight into what to expect from the two disc album release. Rather than limit themselves to modest organic compositions, Hidenori Iwasaki and Ryo Yamazaki focused on creating everything from full orchestral anthems to lively rock and country improvisations. What's more, it's clear each composition here is intricately developed and performed by a team of talented instrumentalists, not to mention effective in context too. If this sampler is anything to go by, the final soundtrack will be a must-have.

Album was composed by Хидэнори Ивасаки / Рё Ямадзаки and was released on November 12, 2009. Soundtrack consists of 6 tracks tracks with duration over about 15 minutes. Album was released by Square Enix.