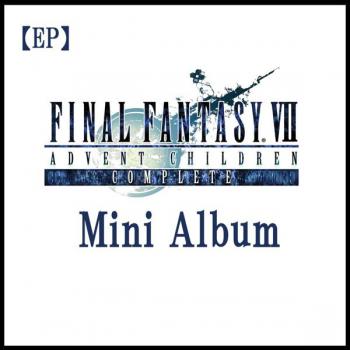 The album begins with a clumsy new version of Keiji Kawamori's composition "The Chase on the Highway". The original was very exciting with its driving rhythm guitar riffs and emotional interludes, but the new version seems to lose some direction. The bass riff is repeated so many times, especially in the introduction, that it becomes tedious and the number of sudden transitions is now excessive. While there is a nod to Final Fantasy VII's "Crazy Motorcycle", it's only one of many brief and random sections that eventually extend the track time by two minutes. Rather than going straight down the highway, this one just goes round in circles with a few unproductive tangents along the way. Kenichiro Fukui's "Those Who Fight Further" copes with the padding a little better. The original was mostly an engaging blend of aggressive rock and techno riffs, though sometimes descended into a generic wall of sound. There isn't all that much new added to the remix other than some additional loops and the occasional new layer or screechy solo. However, the piece basically sustains its six minute playtime without tripping over itself within the film and is moderately entertaining on a stand-alone basis.

The track that has lost the most flair is crucially "Advent: One Winged Angel". Most fans, including myself, were delighted by this over the top blend of orchestra, chorus, and rock band. Rather than reuse the orchestral performance from Shiro Hamaguchi's Final Fantasy VII Reunion Tracks, it appears that Square Enix decided to finally re-record the orchestra part, unfortunately using Kazuhiko Toyama as the conductor. The performance is one of the worst out there — the lead trumpets are too soloistic and give a somewhat jazzy flavour to the cadences, the chorus is a little out of balance with the orchestra, and, worst of all, the timpani is way too prominent and sounds very tinny. The problems really mount up when the arrangement finally diverges from the Advent Children version at the five minute mark to offer three sparse and rambling new sections for orchestra. Given the pieces appears to end at the 6:00 mark, the subsequent coda feels especially anticlimactic. It seems the team really struggled to extend an already brilliant arrangement and, in doing so, exposed their lack of inspiration, lost the dramatic arch, and oversaw a horrible new performance.

The only definitive improvement featured here is the new version of the piano piece "Sign" used when meeting Rufus. The lacklustre original repeated the same eerie diminished arpeggio patterns over and over before eventually adding a few underdeveloped vocal notes. Toyama's arrangement does quite a bit more by elaborating on the piano lines and offering interplay with various string elements. However, it adheres too strongly to the same predictable chord progressions and arpeggios to live up to its aspirations to sound like one of Dvorák's romantic miniatures. It feels much richer in context now, but still isn't a creditable musical achievement. Another composer known for creating illusions of substance is Takeharu Ishimoto, who has recently been assigned to score Denzel's book-to-anime adaptation "On the Way to Smile". The main theme for the score is oddly featured on this mini-album and proves to be a little better than some of his other efforts. The track revolves around piano and strings performances of a simple but sonorous melody somewhat reminiscent of his main theme for Crisis Core: Final Fantasy VII. The piano work is quite individual and, in spite its numerous naïvities, fairly intricate. The string sections add drama and character to the comprehensively developed piece in a derivative yet engaging way. Decent enough.

The Final Fantasy VII Advent Children Complete Mini Album is a further example of an amateurish Final Fantasy music production by Square Enix's ever-weakening team. The album may have sufficed if Shiro Hamaguchi and Kenichiro Fukui returned, but it appears that Square Enix chose to stick with the untalented orchestrator Kazuhiko Toyama and relative newbie Keiji Kawamori as the main arrangements. They struggle with the demanding but achievable concept of extending several already accomplished pieces. In doing so, they senselessly jumbled "The Chase on the Highway" and lost the balance and dramatic arch of "Advent: One Winged Angel". The album is only worthwhile for the contemplative piano pieces "Sign" and "On the Way to Smile", but even these feel like pale imitations rather than the true emotional masterpieces of Uematsu, Hamauzu, or Fukui. I recommend people with affinity for the originals or, worse, contempt for the already dubious Advent Children score to stay away from this mini-album.

iTunes release
Album was composed by Кэйдзи Кавамори / Нобуо Уэмацу / Такэхару Исимото and was released on April 10, 2009. Soundtrack consists of 5 tracks tracks with duration over about 30 minutes. Album was released by Square Enix.