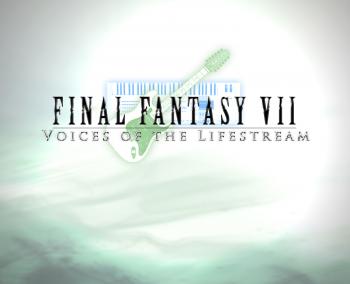 It's with great pleasure that I am finally be able to delve into the video game remixing community and review one of the most expansive projects the community has undertaken to date. Put together in conjunction with OverClocked ReMix, previous projects have included collections of arrangements from popular titles such as Metroid, Earthbound, and the Chrono series. This time around, however, approximately forty talented musicians arrange and re-imagine nearly all of Nobuo Uematsu's legendary Final Fantasy VII score.

Spanning four discs, and coming in at over three hours and twenty minutes, there is a lot of material here. Several of the arrangements even take a single minute of source material and transform it into several minutes of new music, which is an amazing accomplishment in itself. Nearly every genre imaginable is covered, and the fact that so many artists have come together to contribute forty-five pieces that maintain a consistent voice and a top-notch level of quality is incredible. The track listing follows the original score's order closely, with a few changes made to assist in musical flow and consistency across the four discs.

The project opens with "Deliverance of the Heart" by Pixietricks and Zircon. It's a great opener, featuring bits of the series' standard prelude before jumping into the meat of the piece. A mellow piano melody and soft percussion back soothing female vocals. The vocals continue to voice a soothing melody alongside the instruments, giving the piece a comforting, motherly character, and giving listeners a glimpse of the staggering quality of music that is to follow.

"Every Story Begins With A Name" by Big Giant Circles is what I consider to be the true opening piece of the album, being an arrangement of "Opening ~ Bombing Mission" from the original score. The soundscape created by the original piece is greatly enhanced with more than the obvious synthesizer upgrade, including heavier drums and lots of reverb, adding spaciousness to the mix and allowing the piece to feel larger and more encompassing. Bombing Mission gets a knob-twisting, slider-pushing treatment, putting it on the level of what you'd hear in a tense action scene in some sort of espionage film. A buzzing siren even comes in from time to time, and ends the piece as it fades into the distance, greatly improving upon the atmosphere of the original piece.

Next comes grunge and reggae with LuIzA's "Materia Junkie," starting with a thumping bass and angst-ridden distorted guitar chords and chugging, highly reminiscent of 90s rock acts like Alice in Chains. The piece transitions into reggae with jumping bass, guitar plucks on the upbeats, and a jazz organ. "Too Much Fighting" by Another Soundscape transforms the thirty second after-battle victory ditty, "Fanfare," into a five minute electronic journey featuring numerous themes from the game.

After forcibly pulling my jaw up off the floor, "Adrenalyn Kyck" by Big Giant Circles, Liontamer, and Zircon began with heavy, thumping bass, and slowly building synths, working their way up from a squeak to a guttural roar. A rocking guitar solo ensues before a humorous, but magnificently well-implemented electronic vocal bit comes in, "People die of disease and accidents, death comes suddenly, and there is no notion of good and bad... if I had known this was coming, I would have done things differently." The vocal clip distorts and skips at the end before all hell breaks loose as the piece intensifies, letting free a barrage of percussion, bass, and distorted guitars.

Community strong-man Mustin comes next with "Serenity," which takes listeners through a surreal chillout take of the important "F.F.VII Main Theme." The down-tempo arrangement features groovy bass and percussion, clean pianos and guitars, and the angelic vocal chords of Lisa Leamons, who voices the beautiful melody. Going in a completely different direction, Sixto Sounds, Suzumebachi, and Zircon's "Scenes from a Memory" takes the progressive rock approach with lightning-fast percussion and guitar segments. The insertion of the series prelude is a nice touch at the end of the piece, and helps improve the continuity of the album.

Two of my favorite arrangements come next: "Golden Fields" by Geoffrey Taucer and Tepid, and "Chasing the Storm" by Rellik. "Golden Fields" takes the calm chocobo farm piece and improves upon it in every way. A rooster-like caw starts the piece off before a warm piano melody begins. The piano melody is accompanied with a fat glassy synthesizer, adding depth and a sense of enchantment, sounding almost like chocobo in the sky with diamonds. It's a fun and fresh take on the original. "Chasing the Storm," on the other hand, begins with a suspenseful piano and string segment before it takes on an 80s synth-pop character, complete with pulsating synthesized bass and a melancholy melody. Glitchy, screeching electronic accents are added before the groove takes over in the form of a jumping bass line and a clean electric piano. The arrangement adds spunk, and is one of the most powerful pieces on the album.

Enter jazz. "Midnight at Club Corel" by Red Trailed Fox and Shnabubula takes an unmemorable piece from the original score and spruces it with a little traditional jazz. A piano, flute, and organ take turns with solos as bass and percussion build a foundation for free-form jazz. This smooth jam comes in at over six minutes, and is quite a treat for fans of real jazz music. "Suco de Malanicia" by Red Tailed Fox is a chipped out bossa nova arrangement of "Costa Del Sol." It's so bossa nova that even the girl from Ipanema has to stop by for a visit (literally, a brief arrangement of the classic melody is included here).

One of the most bizarre and downright humorous arrangements is "Jenova Returns" by Steffan Andrews. Meant to be the theme of the overriding villain the game, Jenova gets the Hollywood villain treatment here. An epic heroic entrance gives rise to an airy orchestral arrangement that gives me an image of Jenova flying in clad in spandex with a flowing red cape in tow.

What about Sephiroth, you ask? Seven artists take on the iconic theme, "One Winged Angel," including previously mentioned artists along with BLiNd, Fishy, and Tefnek. Titled "Black Wing Metamorphosis," the team really dropped the kitchen sink on Sephiroth, incorporating chip, orchestral, rock, and electronic elements. A grungified chip version of the melody opens, sounding small and tinny, like it's coming out of a cellphone, but it quickly gives way to a phantom-like choir pad. Brass, strings, and chugging guitars are added before thumping bass and percussion join in. The whole piece is chopped up and rearranged, with glitchy, mechanized noises that make Franksenstein look like America's top model. It took seven of the most talented remixers in the community to construct this monstrosity, but they definitely came out on top in the end.

The final piece is an absolutely gorgeous medley performed completely on the piano. It begins with a reflective arrangement of "Lifestream," which is a piece that is sadly absent from the rest of the album (it's one of my favorites). Jazzy jivin' arrangements of the main theme and Tifa's theme follow. Numerous other pieces are included in the arrangement, all with flawless transitions, propelling this piece way beyond the official piano collection albums that have been released over the years by Square. It's contemplative in emotion and stunning in execution, making it a perfect closing piece for the album.

It doesn't get much better than this when it comes to arrangement albums. I would say, however, that while it is a magnificent collection of arrangements from one of the best game scores of all time, casual videogame music fans may find themselves overwhelmed with the sheer scope of this project. It's very ambitious, and I think everyone involved has a lot to be proud of. This is by far my favorite project to come out of the remixing community, and hopefully it earns each of the individual artists and sites like OverClocked Remix the recognition they deserve in the industry. Needless to say, if Square Enix does ever get around to a Final Fantasy VII remake, their new-and-improved score is ready to go. Final Fantasy VII: Voices of the Lifestream will be available to download for free at OverClocked Remix so be sure to check out one of the most impressive and encompassing listening experiences in the world of videogame music.

1.03 No Such Thing As the Promised Land (Mako Reactor)
Arrangement: sephfire, SGX

1.04 Materia Junkie (Under the Rotting Pizza ~ The Oppressed)
Arrangement and Performance: LuIzA (guitar)

1.06 Too Much Fighting (Fanfare)
Arrangement: Another Soundscape

2.09 Chasing the Storm (In Search of the Man in Black)
Arrangement: Rellik

2.12 Mark of the Beatsmith (Mark of a Traitor)
Arrangement: Hy Bound

3.07 Ahead on Our Rave (On Our Way)
Arrangement: FFmusic Dj

3.10 Fading Entity (Listen to the Cries of the Planet)
Arrangement: bLiNd, Leifo

4.03 Airships Make Me Happy (The Highwind Takes to the Skies)
Arrangement: Star Salzman

4.08 Beginning of the End (Birth of a God)
Arrangement: bLiNd

4.10 The Golden Ivories of Gaia (Various Themes)
Arrangement and Performance: Bladiator (piano)
Album was composed by Нобуо Уэмацу and was released on September 14, 2007. Soundtrack consists of 45 tracks tracks with duration over more than 3 hours. Album was released by OverClocked ReMix.