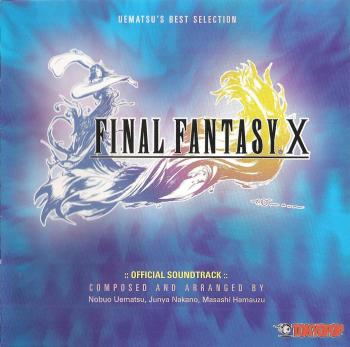 All Final Fantasy soundtracks from IV to XII received some sort of domestic soundtrack release with the exceptions of VII and XI. IV, VI, and VIII were complete prints that have been overshadowed by the Japanese releases that Western customers. V, IX, and X were highly incomplete releases mostly intended to water the mouths of the listeners so they buy the import releases. The Final Fantasy X - Uematsu's Best Selection only consists of 17 tracks from a 91 piece score, though is cheap to ship and easy to buy. While not the score for the completist, some casual fans of the game's score might want to consider purchasing it above the Japanese soundtrack.

Unlike most compilations, the track selections are excellent here. The three composers from the game all prominently feature, some sort of dramatic arch is established, and a wide variety of styles are featured. From Nobuo Uematsu, the simple melancholic piano theme "Zanarkand" and the controversial but memorable rock vocal "Otherworld" introduce the soundtrack. The soundtrack attains an action-packed aura with the glorious main battle theme, supported by the boss theme "Enemy Attack" and the intense and percussive "Run!!" composed by Junya Nakano. Masashi Hamauzu subsequently colours the soundtrack with the exquisite contributions of "Besaid" and "The Sending", an arrangement of the "Song of Prayer" theme with ethnic instrumentals heard in Kilika. The album gets better and better with the Nakano's off-kilter guitar theme "Luca", Hamauzu's techno blitzball track "Blitz Off!", and one of Uematsu's finest arrangements of the Chocobo theme, "Brass de Chocobo". As the soundtrack approaches its conclusion, the contemplative "Yuna's Decision" used on Calm Lands and the impressionistic "Wandering Flames" used prior to entering Zanarkand emphasise the sadness of the summoner's journey. The three boss battle themes used within Sin bring the soundtrack towards its end — Uematsu's villain theme techno arrangement "Seymour Battle", Nakano's blistering "Summoned Beast Battle", and Hamauzu's dazzling piano concertino "Decisive Battle". After the final battles, the orchestral "Ending Theme" is heard in full before the original version of the ballad "Suteki da ne", sung by Rikki, concludes the experience.

While every important aspect of Spira is contained within this soundtrack and the pieces are some of the best composed for the game, there are notable omissions nonetheless. From Uematsu, these include the forest theme "Silence Before the Storm", the piano-led "Via Purifico", the guitar-led character themes for Jecht and Auron, and many of his superficial but catchy pieces. For those who appreciate him, Nakano's icy "Illusion", ghostly "Guadosalam", and world map theme "Sprouting" will be missed. The greatest deficiencies are from Hamauzu's side, however, who carried the soundtrack to musical greatness with his immensely creative but often rather different creations. These include the acoustic guitar arrangement "Spiran Scenery", the playful "Thunder Plains", the eccentric "To the End of the Abyss", the battle theme "Challenge", the intensely dissonant "Crisis", the mesmerising action theme "Attack", and the tracks used in Gagazet and Zanarkand, "People of the Far North" and "Someday the Dream Will End". Also missing is many people's preferred orchestral version of "Suteki da ne". On the other hand, some absences are more than welcome for the consistency of the score; I think few will miss the endless arrangements of "Seymour's Theme" and "Song of Prayer" on the Japanese soundtrack, Uematsu's idiotic "Djose Temple" and "Riding Shoopuf", and Nakano's five themes that consist of nothing but repeated percussion and suspended strings. There is no doubt that the Japanese soundtrack is a highly inconsistent experience that will leave many skipping to get to a single memorable or inspired theme.

Overall, the Final Fantasy X - Uematsu's Best Selection is recommended for the casual fan that wants the classic themes from the game's soundtrack and a taste of the musical colour of Spira as a whole. It has opening, battle, setting, reflective, ending, and vocal themes and reflects the sadness, culture, distractions, and desperation of Spira well. All the classics are here and with minimal accompanying sludge, though the omissions will be displeasing for those with individual tastes, particularly if they have some inclination towards co-composers Nakano and Hamauzu. If these omissions dissatisfy you, I'd immediately suggest importing the Final Fantasy X Original Soundtrack for a little extra price. If they don't, go right ahead and buy this surprisingly good domestic release.

Album was composed by Дзюнъя Накано / Масаси Хамаудзу / Нобуо Уэмацу and was released on November 20, 2001. Soundtrack consists of 17 tracks tracks with duration over more than hour. Album was released by Tokyopop Soundtrax.