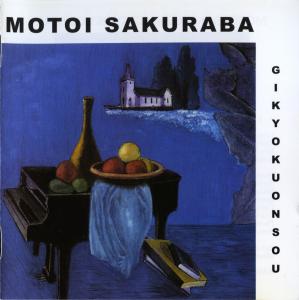 After the disbandment of the band Deja Vu following the release of their only album Baroque of the Future, Motoi Sakuraba eventually made a solo album for himself. Released in 1991, Gikyokuonsou is Sakuraba's first solo album and chronicles some of his early progressive rock pieces. For someone who's been in the industry for a long time now, how does this album hold up to some of his later works? Read on to find out...

Gikyokuonsou is all about one thing: fun. In this album, Sakuraba throws all structure to the wind. We see creativity's cup filled to the brim with anticipation. Luckily, Sakuraba drinks the entire cup of creativity, as this work, to this day, still offers the definitive Sakuraba progressive rock experience. Within this album, you'll get a variety of progressive rock, from ballads to the full blown express train to awesomeness. By blending mysterious sections and heroic sounding passages, "Humpty Dumpty" proves to be an excellent opening piece. It's truly amazing to see how he can definitely make the track seem like it's telling the classic story of Humpty Dumpty.

"Byzantium," with its use of futuristic synth in combination with a slower pace, creates a dream-like soundscape that we first heard in Baroque to the Future. Moving on to the central works, "Motion" definitely focuses on having a feeling of jazz, especially in the opening. As the pieces progresses, more classical influence seems to become apparent. In the end, "Motion" is one of the best tracks on the album. Although Sakuraba's personal favourite, it isn't quite mine. "Narratage" takes the role of ballad on this album. There is such a sense of drama and emotion in this piece. I also feel that this is one of Sakuraba's favorites as well, since he uses it in Forest of Glass, his second solo album.

"Paradigm," my personal favorite, is probably the composition that most sounds like a Star Ocean composition. It has a nice blend of futuristic synth and keyboard work and also sounds like it'd fit perfectly in one of those games as a battle theme. It's definitely the most fun track on the album if you ask me! His other compositions, "Tone Access," "Drama Composition," and "Scrap and Build" are also great compositions. The first seems to have an Arabic flair to it, in terms of synth, especially towards the end. "Scrap and Build" is plain old progressive rock, with a piano heavy focus. The experience is definitely extremely pleasing. "Drama Composition" has a nice rhythmic focus underlying the synth keyboard work. It really showcases Sakuraba's prowess as a keyboardist.

I'm not gonna lie. This album is hard to review. It's quite hard to describe a lot of progressive rock, especially Sakuraba's. In the end, this album is definitely too good for words. It offers the definitive Sakuraba experience, before people started to get disinterested with him. It's one of my favorite Sakuraba albums of all time, and it has, and will continue, to stand the test of time, at least in my book.