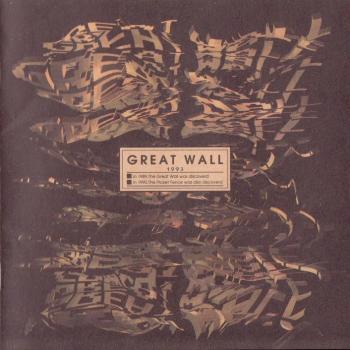 Following the success of Be Filled With Feeling, Shinji Hosoe produced and directed the original album Great Wall in mid-1993. In addition to returnees Hayato Matsuo, Ayako Saso, and Hitoshi Sakimoto, Hosoe recruited a few other big names to the album, most notably Yuzo Koshiro, Takenobu Mitsuyoshi, Hiroshi Miyauchi, and Motoaki Takenouchi, while ditching any band involvement. This time the album tells the story of a space epic similar to what might be found in a typical space shooter. Fortunately, though, the artists are pretty much unrestricted by technology and memory this time so are able to demonstrate their creative juices to the max...

Norio Nakagata opens the album with the triumphant fanfare "Star Falsion"; though short, it's bound to endear to game music listeners with its Gradius vibes. For the subsequent title track, Shinji Hosoe initially reflects the vastness of deep space with relaxing electronic soundscapes. As a crisis nears, Hosoe intensifies the composition from the 1:45 mark yielding a series of intense chords in funk style. Koichi Sugiyama's disciples Motoaki Takenouchi and Hayato Matsuo keep things energetic with their successive contributions. "Dellrhyth E-BB1" initially demonstrates Takenouchi's flair for creating potent rhythms, though the latter half of the composition is dominated by aggressive keyboard improvisation. Matsuo's "The Manic Depressive" is a superb action track blending funk rhythms with avant-garde dissonance. "A Planet's Death" is even better, especially the opening piano sequence and atmospheric supporting strings.

After so many intense tracks, Hiroyuki Kawada takes things down to an eerie silence with "Steady Night Breeze". Though it's obvious the composer intended to emulate the ambience of alien landscapes, this attempt at noise music is a bit too barren and superficial, tending to sound more oriental than alien. Yuzo Koshiro's guest appearance "Resolution" demonstrates that, even in 1993, he was capable of producing very beautiful chillout electronica. The distorted undertones nevertheless maintain the sense of being stranded in the unknown. Hitoshi Sakimoto's "Reinforce" is quite a bit different from what most would expect from him — a bright electronic anthem with powerful melodies and contrasting sections. Takenobu Mitsuyoshi's "Darky" further adds to the diversity with a jazz improvisation rich featuring punchy trumpet melodies and firm underlying percussion.

The ever-eclectic musician Takayuki Aihara makes two late contributions to the album. "Sun" is the most expansive track on the album, blending smooth jazz sections and upbeat electronica to celebrate approaching the destination. "The Planet Nirvana", on the other hand, opens with a far more convincing attempt at eerie ambience than "Steady Night Breeze" and gradually blooms into a heartrending orchestral composition. This suite subsequently enters several intense action sections inspired by John Williams before reassuring with a victorious fanfare and comforting conclusion. To conclude the journey, Ayako Saso offers the fantastical suite "A Minute of Dream", incorporating wavering electronic ambience, rousing orchestral dances, and a romantic finale. Hiroshi Miyauchi's "Go in Person" channels the sentimental influences of his Sega ending themes with a simple set-up of flute, electric piano, and electric guitar. Shinji Hosoe's vocal theme "Cosmo Cradle" is surprisingly good too thanks to the commanding vocal melody and performance by male vocalist Tatsushi Kanzaki.

Great Wall is a spiritual game soundtrack ahead of its time. With electronic scene-setters, intense funk themes, elated jazz interludes, minimalistic ambience, rollercoaster orchestral suites, and even a nostalgic vocal theme, Great Wall ticks most stylistic boxes; more importantly, it does in a very competent manner while ensuring each composition fits within the overall context of the concept album. It provides a very inspiring reflection on what game music would have been like under the direction of Hosoe had a technologically exuberant shooter be produced in 1993. With a diverse all-star cast, solid production values, and an interesting concept, this album is worth hunting down, though will be costly. Hosoe should be very proud.