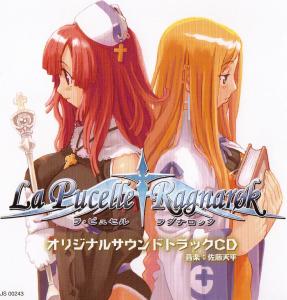 La Pucelle was Tenpei Sato's first strategy RPG score on behalf of Nippon Ichi Software. Sato created a score rather different from those of the Disgaea series given the game's spiritual storyline, French-inspired setting, and anime-based artistic style. He focused on complementing the game's scenarios by mixing traditional and religious with occasional dabs of rock, electronic, and novelty influence. The music was emotional like many of Sato's other works, but feels more personal and sensitive in places, despite upbeat and bombastic moments. Last year, a PSP version of the game, entitled La Pucelle: Ragnarok was released and featured a new scenario. As such, Tenpei Sato composed a few new themes for the soundtrack and an updated soundtrack, featuring a mixture of old and new themes, was packaged with the game.

The main appeal of the soundtrack is definitely the range and depth of the emotions it provides. The opening theme "Legend of the Light Saint" is a spiritual choral work similar to Yasunori Mitsuda's KiRite compositions; despite its fairly short playtime, it fluidly and richly develops to encompass many emotions. "Solitaire" is another prime example, establishing a warm organic soundscape for ethnic flute wails to radiate from, likely reducing some listeners to tears. "Creamy Dreamer" and "From Glitter" are calm gorgeous small ensemble pieces, the latter astounding with its flute and woodwind work. "Fatima", in contrast, is a mesmerising exploration of tonal colour where Sato achieves a sense of stillness without boring listeners. Other highlights include "Saint of Legend", where spiritual and acoustic forces gently unite, "Great Wilder", an Arabian-inspired theme brimming with character, and "Fears for Tears", a climactic piece with brooding chorus support.

Moving on to lighter themes, "Naked Heart of Nature", "My Sweet Memory", and "Happy-go-Lucky" are based on snappy iterations of lyrical phrases, often passed between different instruments to hilarious effect. Inspired by the artistic style of the game, "Heroes" is written in the spirit of a super-cheesy anime theme song with bright electric guitar melodies and semi-orchestral accompaniment; it risks being an obnoxious rip-off in its exposition, but actually develops surprisingly intricately without losing its mood. Despite differing greatly compositionally, "Rosenqueen Land" and "Grand Paprika" are both instantly charming pieces that inspire one to dance with their swaying romantic phrasing. Another highlight in the centre of the soundtrack is the vocal theme "This Is Love? How?"; it's refreshingly frivolous and modest despite its rather predictable instrumentation and melodies, showing together with the opener and closer that Sato is a master of video game vocal themes.

There are plenty of action themes here too. They range from "A Martyr's March", a rocking tribute to old-school game music, "Crazy Pianist", a piano concertino made dazzling despite its brevity by Sato's unique touches, and "Miracle Attack", a climactic battle theme giving great rhythmical impetus by some electronic beats. As is often the case with Sato, I find the main problem with this soundtrack is its tendency to be bombastic on occasions. The battle themes "Magical Holic" and "Panic Panic" meld all sorts of haunting and otherworldly to incredible effect in context; however, on a stand-alone basis, they are too reliant on interrupted phrases and brass discords to be enjoyable. "Endless Journey" and "First Trip" represent a joyous adventure unfolding with loud brass fanfares supported by busy orchestration; though their melodies aren't bad and they capture the spirit and optimism of youth well, some more contrast in dynamic level and character with, say, a deep interlude, could have given these pieces a much greater long-term listening potential.

"Black Mass," one of the new themes, is an action packed battle theme that really delivers. Although it's quite different from the other battle themes on the soundtrack, due to its rock oriented approach, it still manages to fit the overall direction of the battle themes with its beautiful use of haunting choir and fantastic violin and piano sections. It's an excellent theme and one of Tenpei Sato's best in recent years. The other new theme, "The Legend of the Dark Saint" is an orchestrated vocal theme, sung by Sachiko, in the same vein as "The Legend of the Light Saint". The vocal work is extremely expressive and definitely showcases the darker approach to the music. The introductory vocals especially make the theme shine, though the reprise of the chorus in "The Legend of the Light Saint," is a fitting touch and offers a little more delicacy to the theme. It's an extremely strong theme with both touches of darkness and beauty. This is also one of Tenpei Sato's most elegant vocal themes in recent years.

Overall, the La Pucelle Ragnarok Original Soundtrack is a special item in Tenpei Sato's discography. The composer created a very modest and personal work that aptly fitted the story, landscapes, scenarios, and characters of the game. The emotional diversity is excellent, ranging from the deep and spiritual to the light and silly. Of the 30 tracks, only a small handful are worth skipping and the rest of the soundtrack is jam-packed with musical goodness, especially the themes composed for the new scenario. I recommend you try to listen to this soundtrack, but be aware that it is not easily available and the arranged album is a good alternative option.

Enclosed with the limited edition of the game.